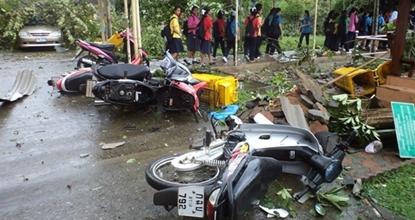 Welcome to 2015. This is the kind of story we hope to get more of this year. (Students and teachers: If news happens at your school that will be of interest to our international audience, let us now and we'll help you become a famous reporter.) 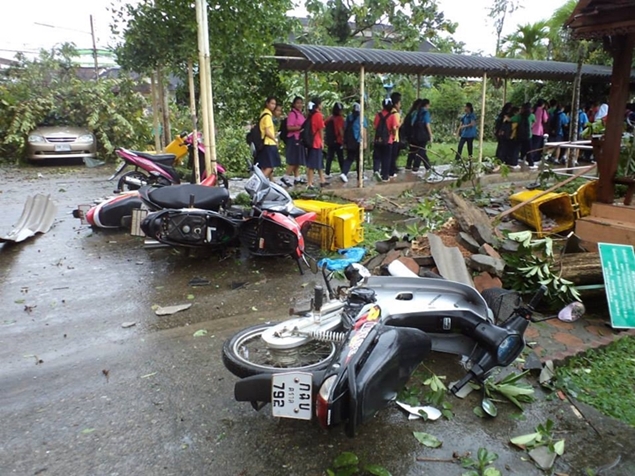 Motorcycles were swept up and scattered by the fierce wind. Photo by Arkhom Suwanprasert

Note: This is the type of news report we would love to have from teachers and students around the country when a news event happens at your school or in your community. Let us know when something happens. We can help you write the story. This story was originally published on September 17, 2013.

Teachers and students of Satreeprasertsin School were shocked when a sudden wind storm struck, injuring students and damaging school facilities and classrooms.

Around 3.30 p.m. on Tuesday, September 10th, while teachers and students were carrying out their school activities, a big wind storm erupted. It started at the front of the school and blew straight through the school halls where there were about 100 students. Some students were injured while trying to close the shutters. 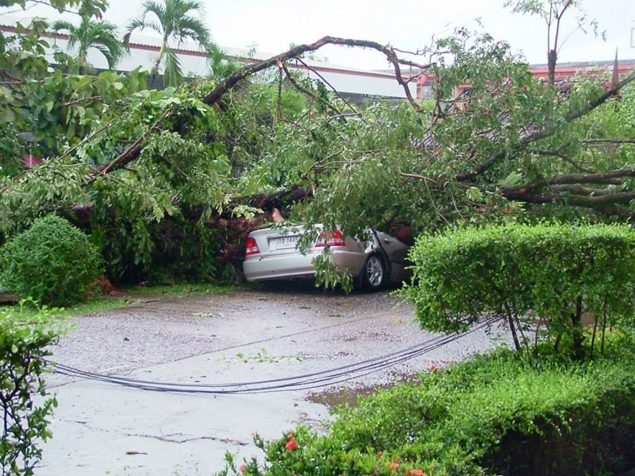 The biggest tree in the school was blown down onto a teacher’s car which parked in front of a school building. Photo by Weeraphat Phimubol

The wind storm hit the building fiercely. Most of the trees surrounding the school were blown down onto pavilions, pathways and even onto some of the teacher’s cars that were parked in front of the school buildings.

The teachers and students were frightened and surprised at this unexpected force of nature. They ran frantically to escape and hide from the wind.


Within a matter of five seconds, many things were damaged. The walls on the third story of one building were heavily damaged and the roof was partially destroyed.

Nine students were sent to the hospital for medical attention. Some were hurt by shattered glass blown out of windows. 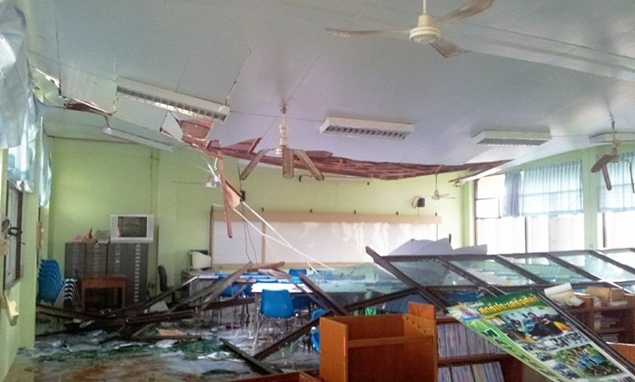 One of the classrooms was badly damaged while there were students inside. Photo by Watcharaphorn Muansaen


Mr. Weerasak Wannarat the director of Satreeprasertsin School estimated the damage at over two million baht

“Thanks to the emergency response team from our local institutes and government agencies for their help. It will take time for the rehabilitation process and to finish the reconstruction needed in our beloved school,” he said.

Click "play" to listen to Be a reporter: Wind storm batters Satreeprasertsin School in Trat and "Download" to keep this file for educational purpose.

beloved : loved very much by somebody; very popular with somebody - เป็นที่รัก, ที่รักมาก

emergency : an unexpected situation involving danger in which immediate action is necessary - เหตุฉุกเฉิน

estimate (verb): to say what you think an amount or value is or will be, either by using available information or by guessing - คาดคะเน, ประมาณการ

injure : to hurt or cause physical harm to a person or animal - ทำให้บาดเจ็บ, ทำร้าย

institute (noun): an organization that has a particular purpose, especially one that is connected with education or a particular profession; the building used by this organisation - สถาบัน,องค์การ,วิทยาลัย,สถาบันหนึ่งของมหาวิทยาลัย

partially : in part, but not completely - บางส่วน

pathway (noun): a way or track that is built or is made by the action of people walking - ทาง, ทางเดิน, เส้นทาง

process : a series of actions that you take in order to achieve a result - แนวทางปฏิบัติ, กระบวน, วิธีการ

reconstruction : the process of building or creating something again that has been damaged or destroyed - การสร้างใหม่, การประกอบใหม่

shatter : to break into many pieces - แตกกระจาย

shutters : wooden or metal covers that can be closed over the outside of a window to keep out light or protect the windows from damage - บานเกล็ดหน้าต่าง

surrounding : all around a place - บริเวณรอบๆ