Lee Craker is a professional photographer who moved to rural Thailand several years ago. This has resulted in a remarkable photographic study of rural Thai monks. 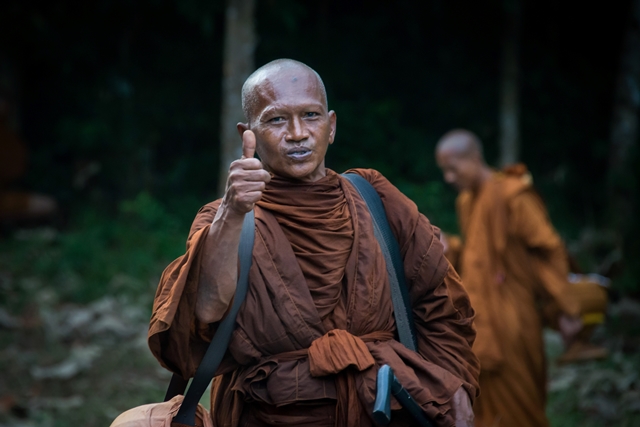 I have found Thai monks to be very receptive to being photographed. Here I traveled to Khao Yai National Park near my home to photograph monks from Udon Thani who were trekking barefoot across Thailand to make merit. One monk upon seeing my camera, gave me the “thumbs up”. Photos by Lee Craker

Story and photos by Lee Craker

I moved to rural Thailand two and a half years ago after living in Bangkok for a short while. I found the move wonderful for many reasons. I am a country boy at heart and love the natural farming lifestyle. The only reservation I had before leaving the city was that I was concerned that my photography might suffer, as I was primarily a street photographer, and the streets of Bangkok are a wealth of opportunity for documentary street work. 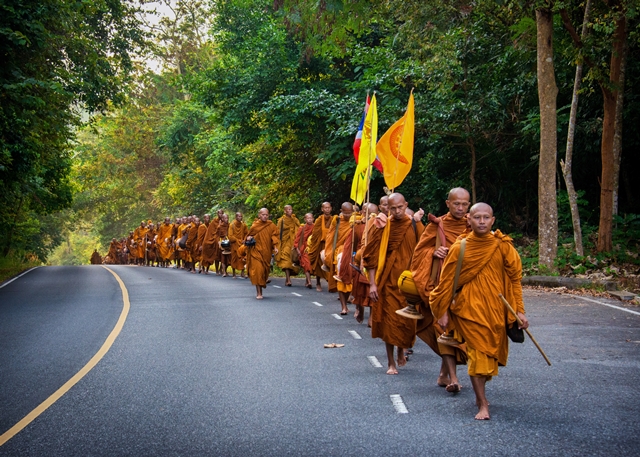 Monks from Udon Thani walk across Thailand barefoot once a year to make merit. Here the monks travel through a pass in the Khao Yai mountains.

The monks quickly became a primary target for my cameras. They are colorful in their orange robes, they are easy going, and they were receptive to being photographed. Over time, as the monks began to trust my ever present camera, I was allowed virtually unlimited access to whatever I wanted to photograph. 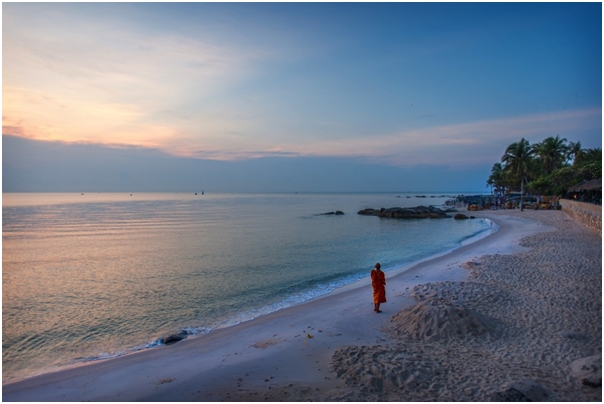 A Thai Buddhist monk enjoys the solitude of a walk on the beach at sunrise in Hua Hin, Thailand.

Gaining this access was done by building trust over a period of time. I would give the monks disks of the photographs I made and the monks soon could tell that I was interested in them as people, and curious about Thai Buddhism. I can’t understate how important this was, rather than the average Farang tourist who looks at them as a curiosity, It became apparent to them I was truly interested in them as people, as beautiful human beings.

Through translations with my wife acting as interpreter, I was able to explain to the rural community here that life in America is much different than this. In America there are many religions and for most practicing their faith is not done in public. So Americans are very curious about Thai monks and Thai Buddhism, which is a part of the daily lives of the Thai people. 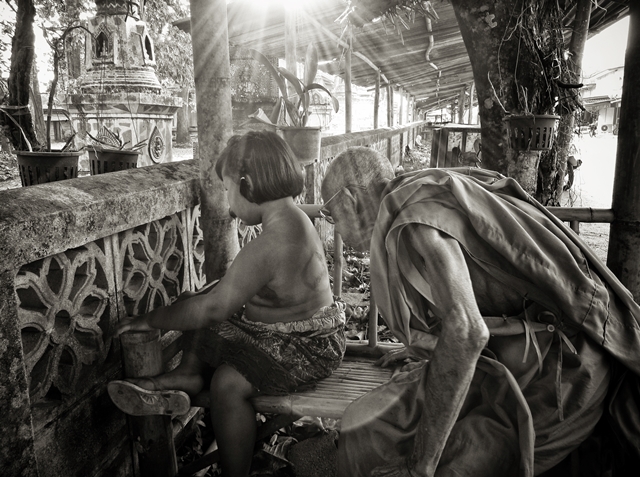 A monk wears many hats in rural Thailand. Here a local monk administers an ointment to a young woman to promote healing of the skin in Ban Na, Thailand.

I found it fascinating that the monks play such a large role in the daily lives of my rural Thai family, from morning alms, to trips to the temple several times a week where they feed the monks and make merit. The monks are asked to bless new construction, to pray for good crops, to hold ceremonies, which bring merit and good luck to the people. 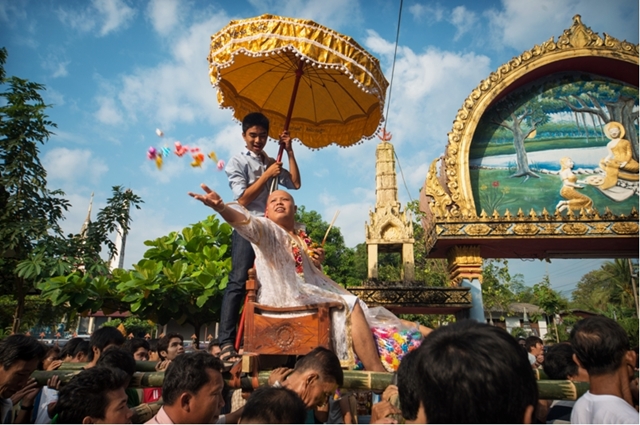 In Thailand almost all men become Buddhist monks sometime during their lives, to make merit for themselves and for their families, especially their mothers. This commitment is usually for a short period of time. Here "At" Atchariya throws ribbons to the crowd during festivities in celebration of him becoming a Thai Buddhist monk in Nakhon Nayok, Thailand.

Americans are surprised to learn that in Thailand the majority of men become monks sometime during their lives. This commitment that makes merit for the man’s family and especially the mother is something that is not done in any religion in America. In the western world becoming a priest is a life long commitment, whereas in Thailand men become monks for a few weeks or months, and children also can become novice monks for a short while. 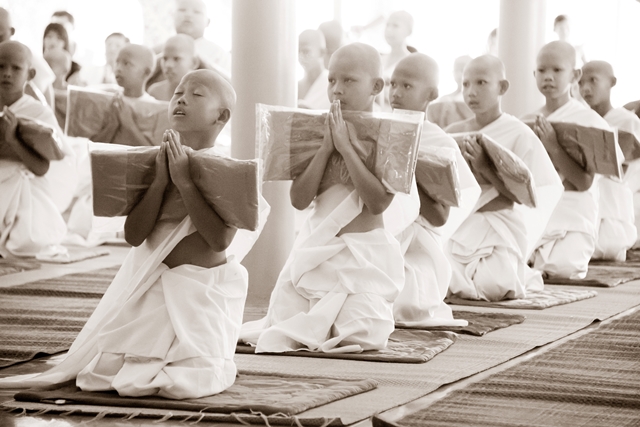 There are many misunderstandings about Thai culture in America. An American friend of mine thought this image was of children who were being forced to become Thai Buddhist monks at a young age. In reality the image is a ceremony where children are saying their vows to become novice monks for a few weeks in the summer in Nakhon Nayok, Thailand.

My personal view on this part of Thai culture is that it is a great thing.  Thailand is known as the land of smiles, and I think a big part of this is due to so many people making a commitment to their families, communities and themselves by becoming a monk for a time. Trying to live the vows of a Buddhist monk, even for a short while, can make a profound change in a person's way of thinking, and this in the long run, benefits society as a whole. 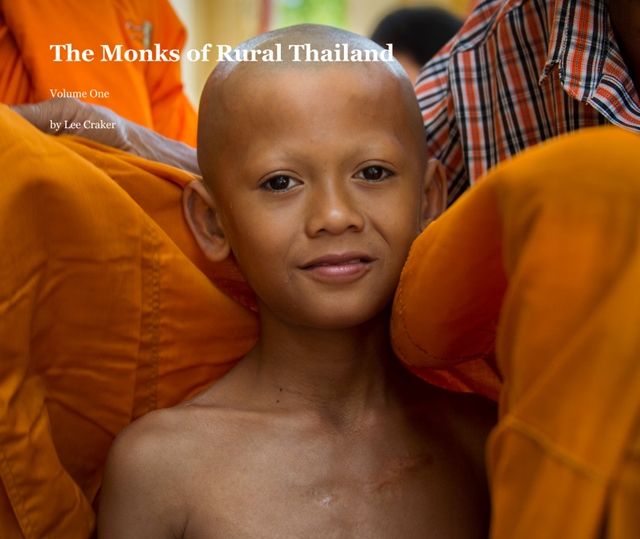 In Thailand almost all men become Buddhist monks sometime during their life. Ordination in the Sangha is considered a rite of passage for young Thai men as an essential part of maturity or becoming "ripe". Documentary photographer Lee Craker spent two years photographing the monks of rural Thailand. His images of this unique and colorful world are now available in a large format fine art edition that would beautifully grace the bookshelf or coffee-table of any home. For those interested in Thailand, Buddhism or travel in Asia this book is a must have.

Click "play" to listen to Monks in Rural Thailand and "Download" to keep this file for educational purpose.

access : having the opportunity to have or use something - มีโอกาสในการใช้

apparent : clear; able to be seen or understood - ซึ่งเห็นได้ชัดว่า

average : ordinary; not unusual or different in any way - ธรรมดา, ปกติ

benefit : to give an advantage to someone - มีประโยชน์ต่อ

commitment : willing to give your time and energy to something that you believe in; a promise or firm decision to do something - การให้คำมั่นสัญญา, การให้คำมั่น, การมอบความไว้วางใจ

concerned : worried about something   - มีความกังวล

constant : continuous; all the time - ต่อเนื่อง

culture (noun): the customs and beliefs, art, way of life and social organization of a particular country or group - วัฒนธรรม

curious (adj): having a strong desire to know about something - อยากรู้อยากเห็น

document : to record the details of something - บันทึกข้อมูล

interaction : communicating with somebody, especially while you work, play or spend time with them - การสื่อสารระหว่างกัน, การมีปฏิสัมพันธ์

majority : more than half of the people in a group - ส่วนมาก

make merit : to do good things according to religious beliefs - ทำบุญ

novice : someone who has entered a religious community but is not yet a full member - สามเณร

personal : your own; not belonging to or connected with anyone else - เป็นส่วนตัว

practice : a way of doing something - การปฏิบัติ

priest (noun): a person who performs religious ceremonies in religions, both Christian an other religions - พระ, นักบวช, บรรพชิต

profound : felt or experienced very strongly or in an extreme way - ลึกซึ้ง

receptive : willing to listen or to consider suggestions - รับได้

reservation (noun): feeling of doubt about whether something is good or right - ความสงสัย, ข้อจำกัด

rural : connected with the countryside outside big towns and cities  - ในชนบท, บ้านนอก

society (noun): people in general, living together in communities - สังคม

suffer : to be badly affected by a very difficult or unpleasant situation - ประสบความลำบาก

translation (noun): words that have been changed from one language to another; the process of changing something that is written or spoken into another language - การแปล, การแปลเอกสาร การแปลโดยทั่วไป

trust : to believe someone is honest, fair, and reliable - เชื่อใจ, ไว้วางใจ