Located near the bustling district of Shibuya in Tokyo, the Meiji Shrine is dedicated to Emperor Meiji and Empress Shoken. Here, six Thai primary school students, almost all of them in the Land of the Rising Sun for the first time, prayed to the divine spirits. Among the many things that they wished for was a successful presentation later that day at the Honda Aoyama office. 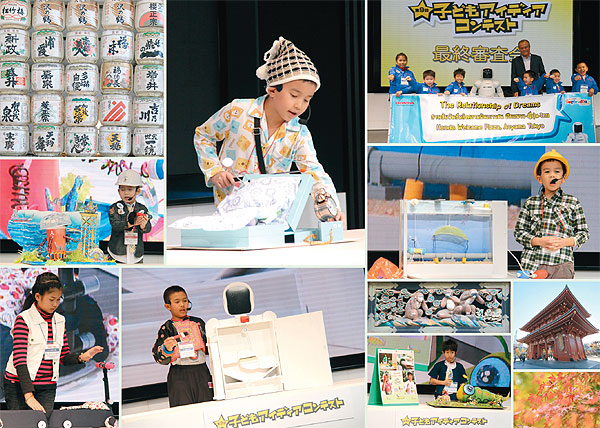 The six Thai winners of the sixth Honda Asimo Super Idea Contest presented their ideas in Japan and celebrated with tours and a trip to Tokyo Disneyland.

They had won the Thai round of the sixth Honda Asimo (Advanced Step in Innovative Mobility) Super Idea Contest (Idea Contest) with their innovative ideas. On the trip that took place late last month, the children were accompanied by a team from Asian Honda Motor Co and Superjeew Co.

"Hajimeimashite. Jade desu. Satitprasanmit Shokakko no ichinensei desu. Dozo yoroshiku onegaishimasu," Jade, or Pattradanai Toopsuwan, a Prathom 1 (Grade 1) student from Srinakharinwirot University's Prasarnmit Demonstration School, briefly greeted the audience in Japanese. He and his other five friends had been given a special short lesson on the Japanese language before their departure from Thailand.

After the introduction, Pattradanai dived into making the presentation, delivered in Thai, on his invention, "Jellyfish That Fight Water Pollution", which had gained him the winner's trophy for the lower-primary school division. Through the help of a translator, the members of the audience, predominantly Japanese, were able to follow his idea for saving the ocean.

Pattradanai explained that he had heard the news on the radio that there was a major oil leak in the Gulf of Mexico. The news report inspired him to create a model of a robotic jellyfish that could alleviate the crisis. The machine is equipped with a radar device that can detect crude oil and dangerous chemical substances. Its tentacles are able to remove the unwanted chemicals. The jellyfish can also put an SOS signal-emitting device on creatures that need help.

"I did not feel nervous at all," Pattradanai said when asked how he felt making a presentation in front of a foreign audience. It was not only Pattradanai who delivered an excellent presentation, but the rest of the group also gave spectacular demonstrations.

Prakaidaw Khunphakdee, the Prathom 5 (Grade 5) student from Marie Upatham School in Nakhon Pathom who was the winner in the upper-secondary school category, presented her "Battery-Powered Suitcase" to the audience. The suitcase can transform into a battery-powered scooter.

Chote Tharachat, a Prathom 2 (Grade 2) student from Saint Gabriel's College and the first runner-up in the lower-primary school category, came up with an oil-absorbent sheet. The invention by Saratchapong Worapisan, a Prathom 2 student from Wachirawit School in Chiang Mai and the second runner-up in the same category, is a bed that can automatically wake a person up.

The remaining delegates had competed in the higher-primary school category. Chanchrist Phanchaisri, a Prathom 6 (Grade 6) student from Sridonchai Community Municipal School in Chiang Mai and the first runner-up, created an Asimo-like cleaning box for blackboard erasers. Polsid Sobhanasiri, a Prathom 4 (Grade 4) student from Bangkok Christian College and the second runner-up, presented a caterpillar-like device made of fabric that can transform degradable waste into fertiliser.

From imagination to materialisation

Soichiro Honda (1906-1991), the founder of Honda, once said: "We have only one future, and it will be made of our dreams if we have the courage to challenge convention." The Idea Contest is another platform for students to dream and innovate.

The contest is based on the education pillar of the four pillars that make up Honda's corporate social responsibilities, namely: environment, education, traffic safety, and local programmes. This year marks the sixth year of the competition in Thailand, the second in Vietnam and the ninth in Japan.

Hitoshi Dewa, manager of the Philanthropy Office of Japan, Honda Motor Co, explained that the competition is based on three conceptual objectives, which are to encourage children to dream, to expand their imagination, and to take challenges.

"It would be good if there are one or two students who can be the next Soichiro Honda," Mr Dewa said.

In Thailand this year, the contest welcomed over 50,000 innovations from students nationwide. Over 200,000 entries have been submitted over the past five years. The participants begin by submitting drawings of their dream invention. The owners of the 80 shortlisted ideas are presented with development fund grants to build models. Ultimately, 30 finalists are chosen to compete in the final round.

"We would like to expand the opportunity for children to showcase their own imagination," said Pitak Pruittisarikorn, director of Asian Honda Motor Co. "If they are able to express their imagination, they will dare to dream and dare to express their dream, which is very important," he added.

Mr Pitak was very pleased with the quality and skills of this year's six winners. "It's really worth our effort," he said. The director would also like to reunite or set up an alumni club for past participants in the contest, so that the children can keep in touch, form networks and share ideas.

At Honda Aoyama, the final round of the ninth Idea Contest for the Japan division was held. Twenty primary school students presented their innovations, while the Thai students observed. Afterwards, the six winners from Vietnam also presented their creations at the gathering.

Masaki Ikariishi, a Grade 3 student from Osaka presented his "All-Lingual" translation device. Kanae Nemoto, a Grade 6 student from Ibaraki prefecture created a photo album that can store photos in liquid form. The album has a device that can spray a liquid to form a virtual picture that includes smells and sounds.

Nemoto was inspired by a novel in which the female protagonist suffers from leukaemia and cannot go outside.

When asked what their favourite invention by the Thai contestants was, the two Japanese children replied that it was Polsid's fabric caterpillar.

Besides the plaques and scholarships, the trip to Japan was a reward that enabled the winners to show off their presentation skills as well as to go on an excursion filled with cultural and educational benefits.

The students visited the Great Buddha of Kamakura at Kotokuin Temple in Kanagawa prefecture, and the Toshogu Shrine Unesco Heritage Site in Nikko, where the mausoleum of Tokugawa Ieyasu, the founder and first shogun of the Tokugawa shogunate, is situated. They also visited Twin Ring Motegi, an automobile racing track built by Honda. The students' most popular attraction was probably the section housing the exhibits showing the development of the Asimo project, which has Asimo prototypes on display.

Within the compound of Twin Ring Motegi, the young inventors also visited Hello Woods, a natural forest complex that houses an outdoor classroom for studying ecosystems. There the students learned about forest and waste management, and they experienced the joys of trekking inside a deciduous forest.

Despite all the attractive sites, the highlight of the trip for the youngsters appeared to be a half-day tour of Tokyo Disneyland.

Dream for the future

After the function at Honda Aoyama had concluded, all the attendees joined in a short show by Asimo. The students had a photo op with the robot. For many of the students on the trip, this particular event was a dream come true.

"I would like to invent a robot that can be friends with people," Pattradanai said, adding that his ambition is to be an engineer. This may well explain his adoration for Asimo. Pattradanai has realised his dream of meeting Asimo in real life, even though he was a little bit disappointed that he could not shake hands with it.

In truth, the most precious prize awarded to the winners of the Idea Contest is not meeting Asimo or a trip to Japan. On the contrary, it is enabling them to learn valuable truths and instilling life skills in them. Prakaidaw learned that everything is achievable through hard work. Polsid, who has signed up for the competition four times, said he has developed greater self-confidence and has learned that concentration on a single thing is the way to success. Chanchrist said he learned several presentation techniques from both Thai and foreign friends that he could apply at school.

The Honda Asimo Super Idea Contest not only gives children the opportunity to dream, but it also equips them with skills that make their dream come true.

"If you stop dreaming, you won't advance. If you dream and you can realise only half of your dream, you are still one step ahead of those who don't have a dream at all," said Mr Pitak.