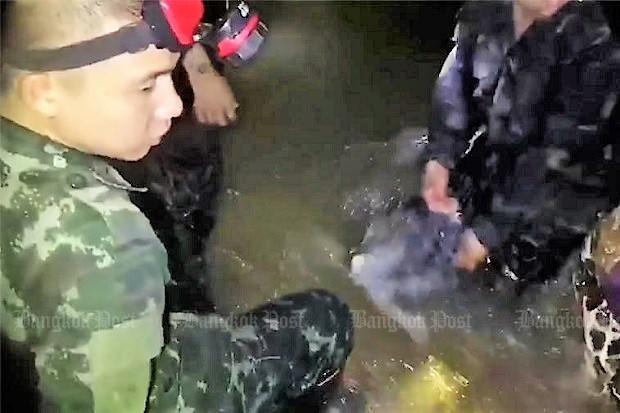 Soldiers at work inside flooded Tham Luang cave in Chiang Rai during the opertation to rescue the 12 young footballers and their coach trapped inside. (Photo: Royal Thai Army)

A former Navy seal taking part in the rescue of 12 young footballers and their coach trapped in Tham Luang cave in Chiang Rai passed out during a dive and died early on Friday morning.

Naval Special Warfare Command chief Apakorn Yukongkaew said Sgt Maj Saman Kunan, 37, who worked for the Airports Authority of Thailand, lost consciousness as he was returning used oxygen tanks to  Chamber 3 about 1am.

His diving buddy tried to help, but in vain.

Rr Adm Apakorn stressed that the former Seal's tragic death will not undermine the effort to rescue the boys.

He said His Majesty the King had given instructions that Sgt Maj Saman be given dignified funeral rites.

Click "play" to listen to Rescuer dies in cave and "Download" to keep this file for educational purpose.

buddy (noun): a partner who does an activity with you so that you can help each other; a friend - เพื่อนคู่หู, เพื่อน

chamber : a space in something (in a body, in a plant, a machine, etc, which is separated from the rest - ช่อง

dignified : behaving in a calm way that people respect - สง่างาม

in vain : without success - ไม่สำเร็จ

undermine : to make something or someone become gradually less effective or successful - ทำให้อ่อนลง,ทำลายทีละน้อย,ทำลายอย่างลับ