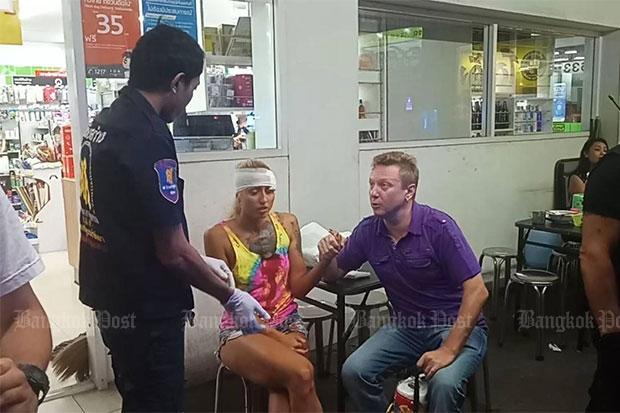 Russian tourist Vera Ivanova, 26, receives treatment for a head wound while her friend tells a rescue volunteer how she was ordered off a songtaew after hitting her head when the driver suddenly braked. (Photo by Chaiyot Pupattanapong)

PATTAYA: A songtaew driver ordered a Russian passenger off the vehicle after she suffered a head injury when he suddenly braked, and then drove off leaving her bleeding on the roadside, early on Wednesday morning.

The tourist, Vera Ivanova, 26, was standing on the pavement, bleeding from a head injury, near Theppaya intersection in tambon Nong Prue of Bang Lamung district, when emergency workers arrived around 3.30am. A Russian man was assisting her.

The rescue team gave her first aid before taking her to hospital.

FamilyMart employee Sakda Kulamart, 19, said the Russian woman, blood runing down her face, had run into the store seeking help.

The tourist told him that she had been sitting in a songtaew. The driver had suddenly applied the brakes and her head hit an iron bar beside the seat.

When the driver saw she was bleeding from the head he had ordered her off the vehicle and then driven away, Mr Sakda quoted the tourist as saying.

The driver was strongly criticised by people who witnessed the incident for not assisting his injured passenger or arranging for her to be taken to hospital. Instead he just abandoned her.

Click "play" to listen to Driver orders bleeding tourist off his songtaew and "Download" to keep this file for educational purpose.

abandoned : left alone by someone who is supposed to look after you - ถูกปล่อยทิ้งไว้

brake (n): a device for slowing or stopping a moving vehicle, typically by applying pressure to the wheels -

first aid : simple medical treatment that is given to somebody before a doctor comes or before the person can be taken to a hospital - การปฐมพยาบาล