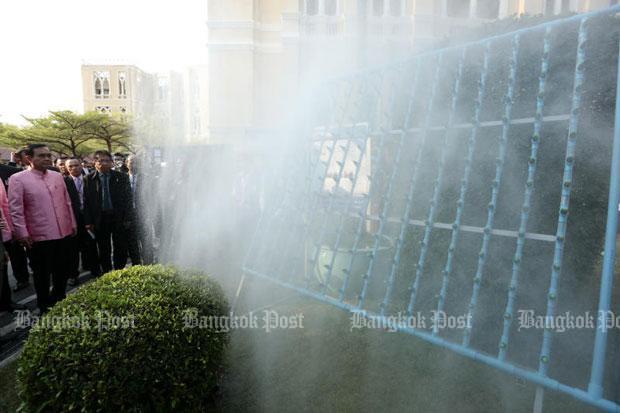 The Pollution Control Department reported on Wednesday morning there were no hazardous levels of fine dust in greater Bangkok, with PM2.5 readings at 18-44 microgrammes per cubic metre of air over the last 24 hours.

Levels of particulate matter 2.5 micrometres and less in diameter (PM2.5) fell in almost all air measurement areas in the city and surrounding provinces.

The lowest level, 18mcg, was reported in Bang Na sub-district of Bang Na district in Bangkok and the highest, 44mcg, on Lat Phrao Road in Wang Thonglang district of Bangkok. The government puts the safe threshold at 50mcg.

The cabinet on Tuesday acknowledged immediate, medium-term and long-term measures to reduce fine dust. They include anti-haze campaigns, enforcement of strict emission standards for petrol and diesel engines, controls on emissions from industrial plants, prosecution for burning off fields, and the promotion of electric vehicles.

Road cleaning is continuing and vehicles emitting black exhaust smoke are banned from entering Bangkok. PTT Plc and Bangchak Plc have reduced the price of their Euro 5 diesel by one baht a litre until the end of this month.

Click "play" to listen to Air 'safe' throughout Bangkok and "Download" to keep this file for educational purpose.

emit : to send something out into the air - ปล่อยออกมา, แพร่กระจาย

exhaust fumes : the waste gas from an engine, especially a car's, or the pipe the gas flows through - ควันท่อไอเสีย

prosecution : the process of accusing someone of a crime and asking a court of law to judge them - การดำเนินคดีตามกฎหมาย