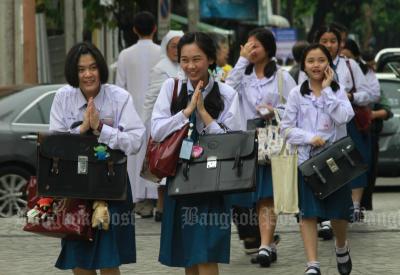 The Education Ministry has decided to introduce more English language classes in state schools across the country, it announced after a meeting on Monday.

The Common European Framework of Reference for Languages (CEFR) standard is popular among European countries and internationally accepted. It one of the most widely accepted metrics for assessing foreign language learners.

In addition, the ministry is in talks with foreign embassies to find more English teachers.

"What we found is that despite Thai students passing the B2 Level, they do not always communicate efficiently with native speakers. So we need English speaking teachers to boost their English language skills," he said, adding that the ministry will ask the Philippine embassy for help with finding teachers.

The extra classes will be gradually introduced in state schools nationwide starting next year, he said.

Click "play" to listen to Kids to get more English classes and "Download" to keep this file for educational purpose.

accept : to agree to or approve of something - ยอมรับ

metric (noun): a way of measuring something - ตัววัด

semester : one of the two periods that a school year is divided into in some countries - ภาคการศึกษา