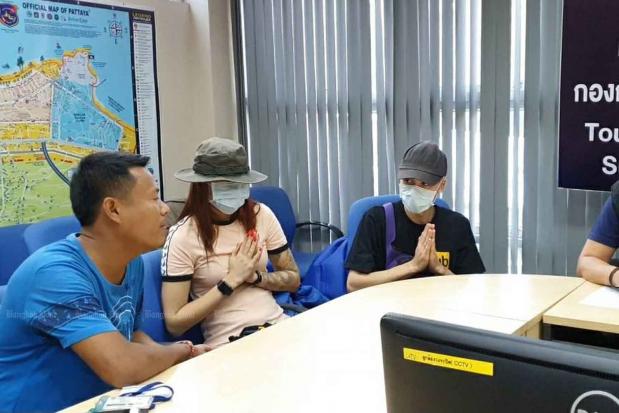 Roman Grigorenko, 26, right, and his partner Daria Vinogradova, 19, apologise for having sex on Pattaya beach, at the Pattaya police station in Pattaya City on Saturday evening. (Police photo)

A Russian couple were arrested and fined for having sex on Pattaya beach during the day on Saturday.

Tourist police said that they arrested the man, 26, and his partner, 19, on the beach at about 3.30pm on Saturday after they were seen having sex.

They were taken to the police station and charged with conducting an embarrassing and pornographic act in public. They were fined 5,000 baht each -- the highest possible fine for the offence.

Tourist police said that both tourists were drunk. While walking along the beach, they didn't see anybody close to them and started to have sex, they said.

Click "play" to listen to Russians fined for sex on Pattaya beach and "Download" to keep this file for educational purpose.

arrest (verb): (of the police) to take someone to a police station because they are believed to have committed a crime - จับกุม

drunk : having had too much alcohol to drink, i.e., drunk or intoxicated - มึนเมา

pornographic : describing or showing naked people and sexual acts in order to make people feel sexually excited, especially in a way that many other people find offensive - ลามก