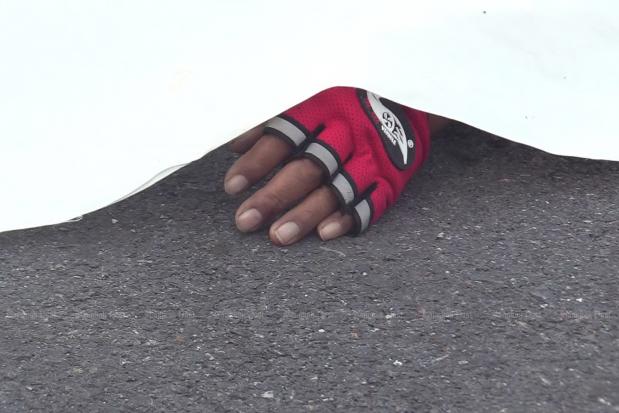 The hand of the dead cyclist shows from underneath the white sheet covering his body. The elderly man was hit by a pickup truck while cycling in a designated bike lane in Muang district of Nakhon Si Thammarat on Wednesday morning. (Photo by Nujaree Raekrun)

NAKHON SI THAMMARAT: A retired village chief was hit and killed by a pickup truck while cycling for exercise in a bike lane in Muang district on Wednesday morning, police said.

Pol Capt Jarin Li-eb, a Muang district police officer, said this happened about 7am in the bike lane alongside a railway tack in tambon Ma Muang Songton.

Cyclist Damrong Jongrakjit, 64, was hit from behind by a pickup travelling at high speed. He died on the spot. The pickup quickly sped away.

Police were looking to identify the vehicle and the driver for legal action.

Witnesses said Damrong exercised regularly, riding his cycle along the bike lane, which was designated by the provincial authority and had become very popular.

Click "play" to listen to Cyclist hit, killed by pickup in bike lane and "Download" to keep this file for educational purpose.

designated : marked, separated, or given a name for a particular purpose - ถูกกำหนด

on the spot : at a particular place where something is happening or happened - ที่เกิดเหตุ

retired : no longer working because you have reached the age where you are officially too old to work or you want to stop working - เกษียณอายุ

speed away (past: sped away) : to move away from something very quickly - ไปด้วยความรวดเร็ว