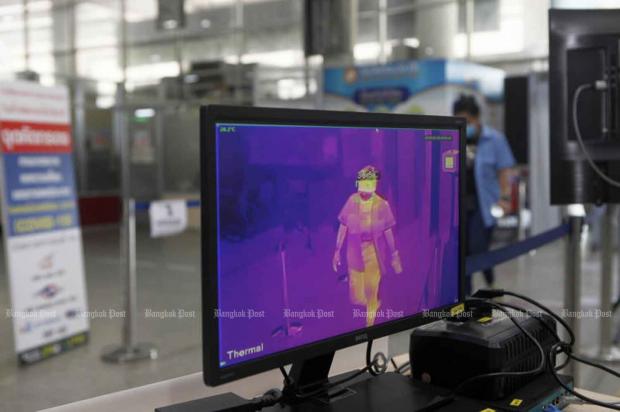 A public transport driver walks past a thermal scanner at a bus terminal in Bangkok on Thursday. (Photo by Nutthawat Wicheanbut)

The Public Health Ministry reported one more death from coronavirus on Friday, bringing fatalities to five, while 91 new cases were found in 52 provinces, raising the total to 1,136.

Of the total, 1,034 were hospitalised, including 11 critical patients on respirators and 97 who were discharged, said Dr Anupong Suchariyakul, a specialist of the Disease Control Department .

Of all recorded cases, 83% are Thais.

The second group consists of 19 people — nine Thais and one foreigner who arrived from other countries and nine others who either lived or worked in crowded areas or places frequently visited by foreigners, including a bus driver, a waitress and four operators.

The third group was 42 patients under investigation.

Dr Anupong said a positive sign was that there were no new cases linked to attendees to a religious ceremony in Malaysia.

Click "play" to listen to Friday: One death, 91 new cases, total 1,136 and "Download" to keep this file for educational purpose.

stadium : a large closed area of land with rows of seats around the sides and often with no roof which is used for sports events and musical performances - สนามกีฬาที่มีอัฒจันทร์โดยรอบ