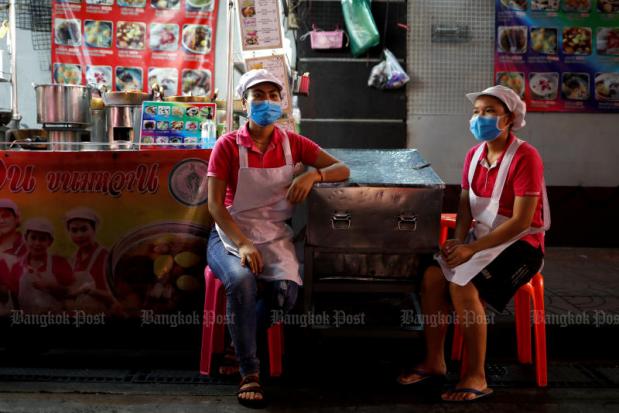 Women wearing masks wait for customers at a food stall during the coronavirus disease outbreak, in Bangkok's Chinatown on Friday. (Reuters file photo)

Thailand saw 136 new coronavirus cases on Monday, raising the total number of infections to 1,524, said the spokesman of the government's Centre for Covid-19 Situation Administration (CCSA).

No new deaths were initially reported, but it later emerged than two more patients have died. Dr Anupong Suchariyakul, a specialist of the Disease Control Department, said one was a Thai man, 54, who had visited Malaysia and been later admitted to a hospital in Yala. The other was a Thai woman, 56, who had suffered pneumonia and been admitted to a private hospital in Bangkok.

The number of new infections was slightly lower than the 143 reported on Sunday. Dr Anupong said of the new 136 cases, 59 had been in contact with previous patients; 21 -- both Thais and foreigners -- had recently arrived from other countries; 15 had been in crowded places or worked closely with foreigners; 10 had visited entertainment places; four had worked in public transport; two had visited boxing stadiums, and two were medical personnel. So far, a total of 21 medical personnel have been infected.

A total of 1,388 patients were still being treated in hospitals, 23 of them severely ill. Sixteen patients were discharged on Monday, raising the total of recovered cases to 127.

He said 32 patients in Phuket and six in Krabi had worked at entertainment places, restaurants and hotels, while some were public transport drivers.