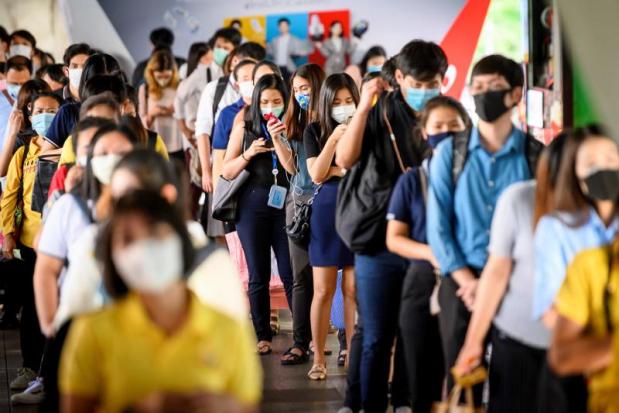 Commuters stand in line to enter a train station already filled to capacity because of social distancing rules at rush hour in Bangkok on Monday. (AFP)

The new cases were people who had recently returned to Thailand from abroad and were already in quarantine, said Taweesilp Visanuyothin, a spokesman for the Covid-19 Administration Centre. The new patients either had mild symptoms, or were asymptomatic.

Dr Taweesilp said that the first case is a Thai masseuse aged 51 who returned from Russia on May 12 and was quarantined in Chon Buri province. She had no symptoms but tested positive for the disease on Monday.

The two others are Thai men aged 45 who returned from work in Kuwait on May 24 and were quarantined in Samut Prakan province. They were coughing and tested positive on Monday.

"The three cases are of working age and have mild or no symptoms. This concerns us. However, they were quarantined and tested," the spokesman said.

Of the 3,045 accumulated cases, 2,929 have recovered, including one patient who was released in the past 24 hours. Fifty-nine patients remained at hospitals. The death toll remained at 57.

Dr Taweesilp said that over the past four weeks, most of the country -- 65 provinces – had recorded no new Covid-19 cases.

"The situation is improving thanks to public cooperation. Now we are heading towards the third stage of easing business and activity lockdowns. It is likely to cover higher-risk businesses and activities. They may resume with strict disease control measures," he said.

cooperation : a situation in which people or organisations work together to achieve a result that will benefit all of them - การร่วมมือกัน

coughing : the action of forcing air up through your throat with a sudden noise, especially when you have a cold - ไอ