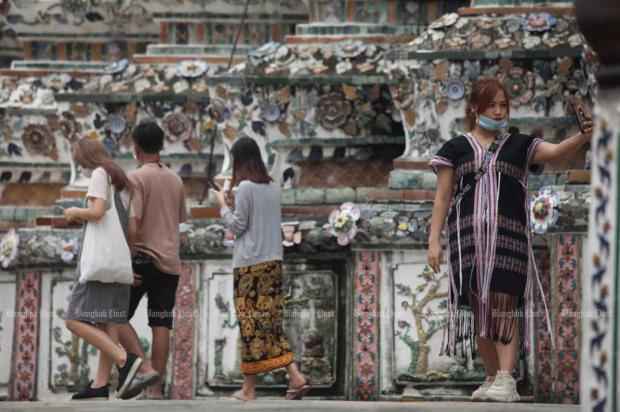 A visitor takes a selfie at the Temple of Dawn in Bangkok on Tuesday. (Photo: Arnun Chonmahatrakool)

Dr Panprapa Yongtrakul, assistant spokeswoman of the Centre for Covid-19 Situation Administration, said the new case was a 31-year-old man who returned from India on June 23 and was admitted to quarantine in Bangkok.

He tested negative on June 26 but positive on Sunday, while being asymptomatic.

Six people on the same flight were found infected earlier, two of them colleagues of the most recent patient.

The other new case is a 39-year-old man who arrived from Indonesia on June 24 and was quarantined in Chon Buri province.

He tested negative on June 29 but positive on Sunday, also while being asymptomatic.

Four other people on the same flight were earlier detected with Covid-19 infection.

Total cases rose to 3,197, of whom 3,074 had recovered, including two patients discharged over the past 24 hours. Sixty-five patients were at hospitals. The death toll remained at 58. The country has been free of local infection for 44 days.

spokeswoman/spokesman : a person who speaks on behalf of a group or an organisation - โฆษก