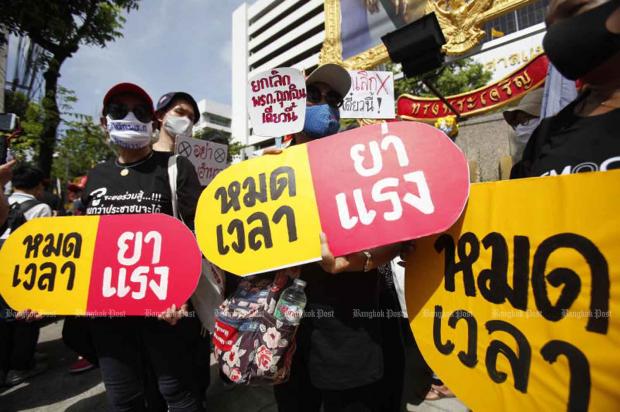 Activists gather at the Civil Court in Bangkok on Thursday, seeking an order that the government use normal laws to control Covid-19 instead of the executive emergency decree. (Photo: Nutthawat Wicheanbut)

Taweesilp Visanuyothin, spokesman of the Centre for Covid-19 Situation Administration, also said the country had now been free of new local Covid-19 infection for 45 days.

The four new cases were people working abroad who returned from the United Arab Emirates on July 2. Three were men aged 38, 40 and 54 years, and the other a woman aged 42. They were quarantined in Bangkok and Chon Buri province and tested positive for Covid-19 on Tuesday, but showed no symptoms.

The other new case is a male student aged 22 who returned from Egypt on July 8 and had partially lost his sense of smell and taste. He tested positive for the disease the same day.

Total confirmed cases rose to 3,202, 3,085 of whom had recovered including 11 patients discharged on Wednesday. Fifty-nine patients remained at hospitals.The death toll had stopped at 58.

"New cases in excess of 200,000 per day are occurring more frequently... The global situation remains critical, so it is definitely not possible to say that we are safe," Dr Taweesilp said.

global : throughout the world - ทั่วโลก

partially : in part, but not completely - บางส่วน

senses (noun): the five powers (sight, hearing, smell, taste and touch) that your body uses to get information about the world around you - ประสาทสัมผัสและการรับความรู้สึก