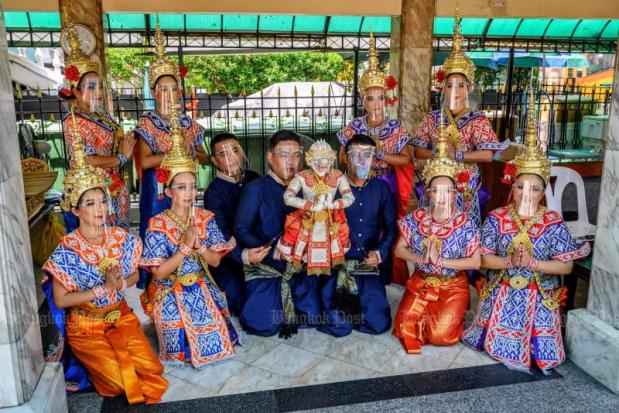 Dancers and puppeteers, all wearing protective face shields, pose for a photo with a Hanuman puppet at the Erawan Shrine in Bangkok on July 13, 2020.

The government reported that seven new imported cases of the novel coronavirus on Tuesday, all Thai nationals who recently returned from abroad -- six from Egypt and one from the US. The death toll remained at 58.

The six returnees from Egypt are male students aged 20-32. They arrived on July 8 and were quarantined in Chon Buri province. They tested positive for the disease on July 11. Four of them were in close contact with previously confirmed cases.

The other case is a 66-year-old maid who arrived from the US on July 9. She was quarantined in Bangkok and tested positive on July 12 while being asymptomatic.

Of the accumulated 3,227 confirmed cases in Thailand, 2,444 contracted the disease locally and 290 were detected in state quarantine facilities. One patient recovered over the past 24 hours, raising total recovery cases to 3,091. Seventy-eight patients remained at hospitals. The death toll remained unchanged at 58.