Wednesday: one more soldier back from Hawaii has Covid | Bangkok Post: learning 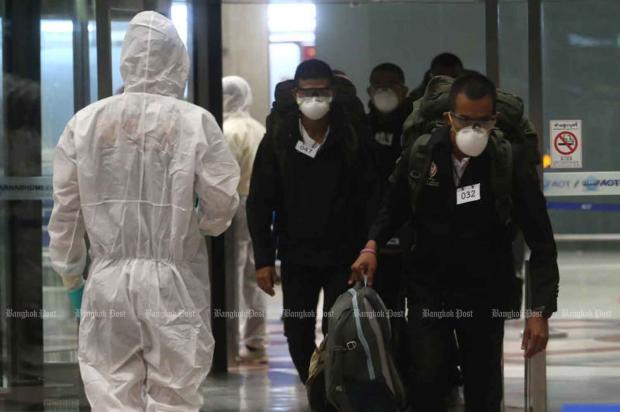 Thai soldiers arrive back from their exercise in Hawaii, at Suvarnabhumi airport in Samut Prakan province on July 22. Nine of the 151 soldiers have now been confirmed with Covid-19. (Photo: Wichan Charoenkiatpakul)

The government on Wednesday reported one new case of coronavirus disease, another of the soldiers who were quarantined on returning from a military exercise in Hawaii.

Tanarak Plipat, deputy director-general of the Disease Control Department, said the man arrived on July 22 and was quarantined in Chon Buri province. He tested positive on Monday, the fifth day after his return.

He took part in the US-Thai military exercise in Hawaii from July 1 to 22, along with 150 other Thai soldiers. They stayed in tents that each held 7-8 soldiers.

The drill included working in close contact with American soldiers, and they camped together.

So far, nine of the Thai soldiers were confirmed with Covid-19.

"There is a chance that Thailand will again log locally infected patients," Dr Tanarak said.

Total cases in the country rose to 3,298, 3,111 of whom recovered and 129 patients were at hospitals. The death toll has been unchanged at 58 since the last reported fatality on June 2.

drill : to have soldiers practise things such as marching or holding weapons - ฝึกฝน

exercise : a set of activities for training soldiers - การฝึกฝน

tent (n): a portable shelter made of cloth or fabric -