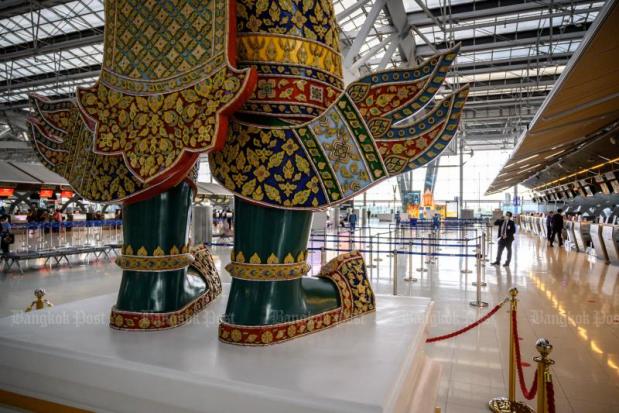 A view of the almost empty departure hall of Suvarnabhumi Airport in Bangkok on Aug 1, 2020, as passenger numbers plummeted due to the Covid-19 coronavirus. (AFP photo)

The government on Tuesday reported one new case of Covid-19, a Russian woman in quarantine, and no new deaths.

No local transmissions of the virus have been reported for the past 71 days.

The Centre for Covid-19 Situation Administration reported that the Russian woman arrived on July 20 and was staying in an alternative state quarantine facility in Bangkok.

Her first test on July 20 was negative, but she tested positive on Sunday, 13 days after her arrival, while asymptomatic. She was admitted to a hospital in the capital.

Of the 529 people who have arrived from Russia, 1.82% have been found to be infected with the novel coronavirus.

The new case raised the accumulated total to 3,321, 3,142 of whom have recovered, leaving 121 in hospitals. The death toll has remained unchanged at 58 since June 2.

test positive : to show in a medical test that a particular virus, bacteria, disease is present in the body - ตรวจพบว่าติดเชื้อ