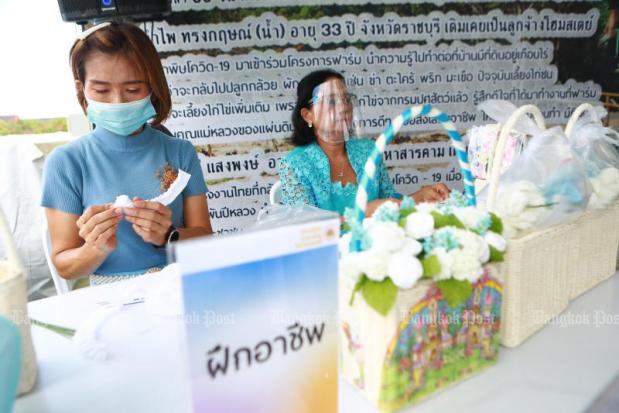 Two women wear protective masks as they host a career-development exhibition at Sanam Luang on Wednesday to mark the 88th birthday of the Queen Mother. (Photo: Somchai Poomlard)

Five new Covid-19 infections have been detected, bringing the total to 3,356, with no new fatalities, the Centre for Covid-19 Situation Administration (CCSA) said on Wednesday.

Three new cases were Thai students, aged 23, 24 and 29 years, who returned from Egypt on July 30 and stayed at a state quarantine facility in Chon Buri.

Another Thai student, 18, who arrived from India on July 30, was also found infected with the virus by the second test on Monday, during quarantine in Bangkok.

The fifth new patient was a male US citizen who arrived from the United States on July 8. He was quarantined at a place in Bangkok and showed no symptoms, but his second test on Monday was positive.

The total number of cases was now 3,356, with 129 patients being treated at hospitals, the CCSA said. Fatalities were unchanged at 58 since June 2.

Returnees from Egypt have the second highest number of infections, with 53 cases, after Indonesia, with 75, the CCSA reported.