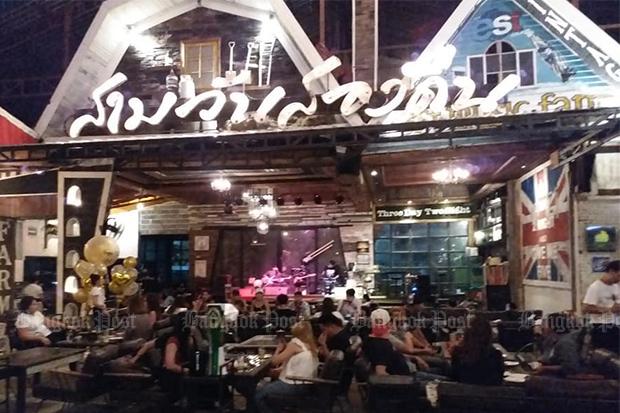 The 3 Day 2 Night pub on Rama V in Nonthaburi is one of the three nightspots closed for cleaning after a local DJ was found infected with the coronavirus. (Photo: 3 Day 2 Night Rama V Facebook)

The government announced four new cases of Covid-19 on Friday, including the first local infection revealed on Thursday - and the temporary closure of the pubs where he had worked as a DJ.

The Centre for Covid-19 Situation Administration said the four new cases took the overall tally to 3,431. With no new fatalities since June 2, the death toll remained at 58.

One of the new cases is a prison inmate, 37. He was found infected with the virus on Wednesday. It ended a 100-day streak without any new local infections.

The man is being treated in isolation by the Corrections Department in Bangkok. He was sentenced to prison on Aug 26 for a drug offence.

The man also worked as a DJ at First Cafe on Khao San Road.

All three places have been closed until Monday for cleaning and staff are in quarantine for 14 days.

The man previously stayed at the Ban Suan Thon condominium in Bang Mod area with six other people, including his wife and mother. They were being treated as a high risk group and were also in quarantine, the CCSA said.

Tests on four of them came back negative on Thursday. The results of tests on his mother and wife were due later on Friday.

The Covid-19 centre said on Friday that only one person at the 3 Day 2 Night pub was considered "at risk", along with 14 others who accompanied the man to court on Aug 26.

He had not been out of the country.

prison : a place where criminals are put to stay for a period of time as punishment for a crime - คุก, ,เรือนจำ

streak : a series of successes or failures, especially in a sport or in gambling; a run - การต่อเนื่อง, ช่วงชัยชนะหรือความสูญเสีย