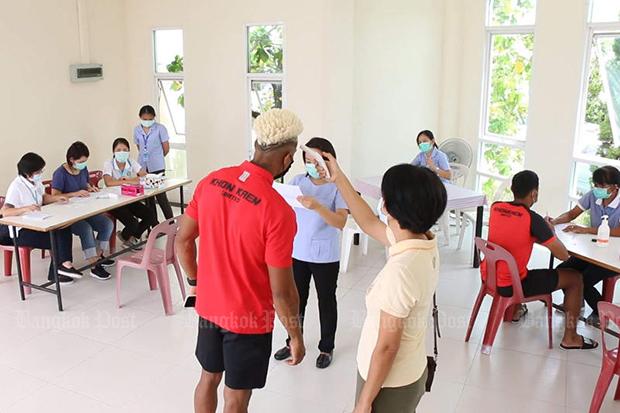 Health officials check the temperature of a Khon Kaen United player in Khon Kaen on Saturday. The team played a warm-up match with Buriram United shortly before one of the former champions was found to be infected with Covid-19. (Photo by Chakkrapan Natanri)

The government reported two new Covid-19 cases on Monday, both Thai nationals who were in quarantine after recently returning from overseas.

The new cases raised the total in Thailand to 3,475. No new deaths were reported.

The first case was a man, 23, who returned to Thailand from the United States on Sept 5.

The other patient was a woman, 29, who arrived back in the kingdom on Sept 7.


The Disease Control Department said it was still waiting for the test results of 286 persons who had been in contact with or close to a Buriram United football player diagnosed with Covid-19.

The department has conducted tests on 441 persons, and all results so far -- 155 – have been negative.

Those testing negative included the players and staff of Buriram United, Ratchaburi Mitr Phol and Khon Kaen United, as well as passengers on the same flight as Uzbek player Akbar Ismatullaev, who was infected with the virus.

diagnose : to find out what physical or mental problem someone has by examining them - วินิจฉัย,ตรวจโรค