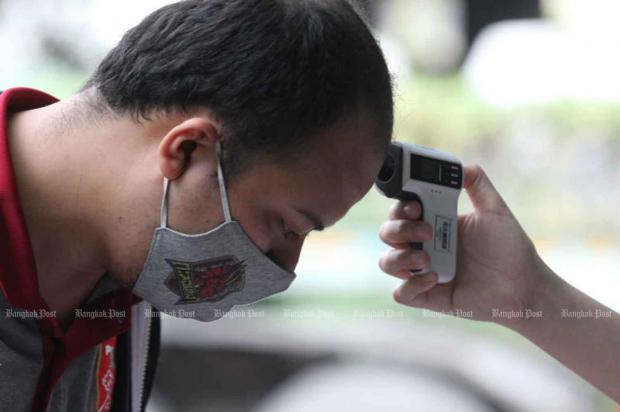 A football fan has his temperature checked before being allowed into PAT Stadium in Klong Toey district, Bangkok, to watch a Thai League football match on Sunday. Photo by WICHAN CHAROENKIATPAKUL

The government on Tuesday reported five new cases of the novel coronavirus, all quarantined after arriving from five countries.

The Centre for Covid-19 Situation Administration said that the new cases were British, Iranian and Thai nationals who arrived from Bahrain, Japan, Pakistan, Qatar and Saudi Arabia.

The first new case is a Thai male worker aged 33 who arrived from Japan on Sept 9.

The second is a Thai male student aged 23 who arrived from Pakistan on Sunday.

The third new case is an Iranian businessman, 35, who arrived from Qatar on Sunday.

The fourth is a Thai man aged 63 who arrived from Bahrain on Aug 30.

The other is a British man aged 40 who arrived on Sept 1.

All were in quarantine.

recover : to become healthy and fit again after an illness or injury - การฟื้นไข้