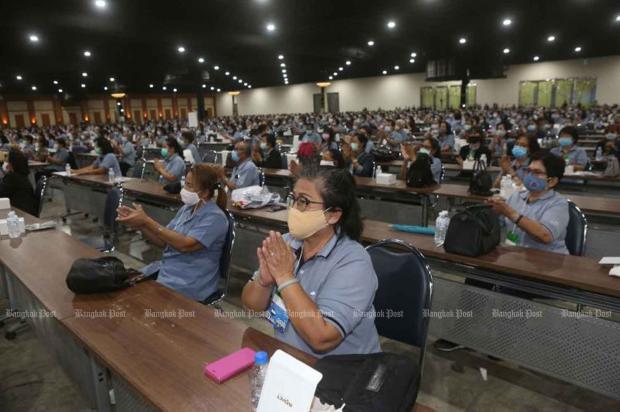 Village health volunteers attend a meeting on Covid-19 control in Nonthaburi province on Monday. Their roles are recognised for effectively control the disease in the country. (Photo by Pattarapong Chatpattarasill)

The government on Wednesday reported three new cases of Covid-19, all quarantined returnees from Japan and France, raising the total to 3,514 cases.

Of the new cases, two were from Japan — a 39-year-old company employee and a 53-year-old maid, according to the Centre for Covid-19 Situation Administration.

They arrived on Monday and were quarantined in Chon Buri province.

The other new case is a male student, 22, who arrived from France last Friday on the same flight as three previously confirmed cases.

The three new cases were asymptomatic.

maid : a female servant in a house or hotel - สาวใช้, หญิงรับใช้