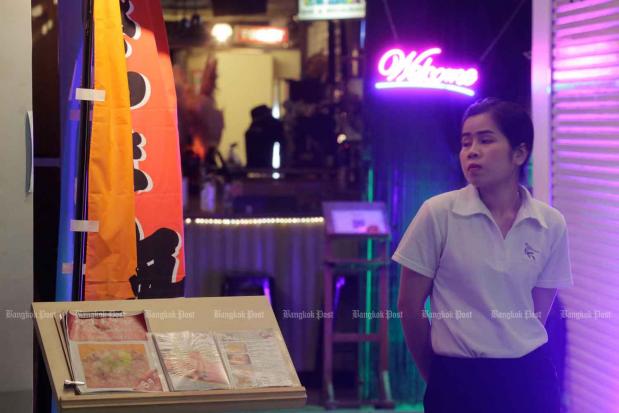 A restaurant employee waits to greet customers on Khao San Road, Bangkok, but business is still down in the formerly bustling tourist area because of Covid-19. (Photo: Pornprom Satrabhaya)

The government on Friday reported 12 new cases of novel coronavirus disease, all quarantined arrivals, raising the total to 3,775.

Four new cases were from the United Arab Emirates, three from India and one each from Ethiopia, Jordan, Myanmar, the Philippines and the US.

The four cases from the UAE are Thais, two men and two women, who arrived on Oct 23 and 24. Three of them were on the same flight as four previously confirmed cases.

The returnees aged 26-52 are a company employee, a masseuse, a waiter and a housewife. They tested positive on days 4 and 5 after arrival.


Three cases from India included a Thai masseuse aged 31 and an Indian man aged 32. They arrived on Oct 23 and tested positive on day 5.

The other is an Indian housewife who arrived on the same day but she had been diagnosed with Covid-19 earlier, on Sept 28. She also tested positive on day 5.

The case from Ethiopia is an Ethiopian man, 43, who arrived on Oct 28 to seek treatment for another illness. He tested positive on arrival.

The case from Jordan is a Thai student aged 25. He arrived via Qatar on Tuesday and tested positive right away. He was the only one among the 12 new cases with a Covid-19 symptom, a runny nose suffered three days before arrival.

The case from Myanmar is a Myanmar woman, 30, who arrived on Oct 28 to seek treatment for another illness. She tested positive on day 1 and had been diagnosed earlier with Covid-19, on Sept 23.

The case from the Philippines is a Brazilian engineer, aged 32. He arrived on Oct 22 and tested positive on day 5.

The single case from the US arrived on Oct 23 via Taiwan. The 34-year-old Thai businesswoman tested positive on day 5.

diagnose : to find out what physical or mental problem someone has by examining them - วินิจฉัย,ตรวจโรค

runny nose : when liquid flows from the nose - มีน้ำมูก

waiter : a man or boy who brings food and drink to your table in a restaurant or café - บริกรชาย