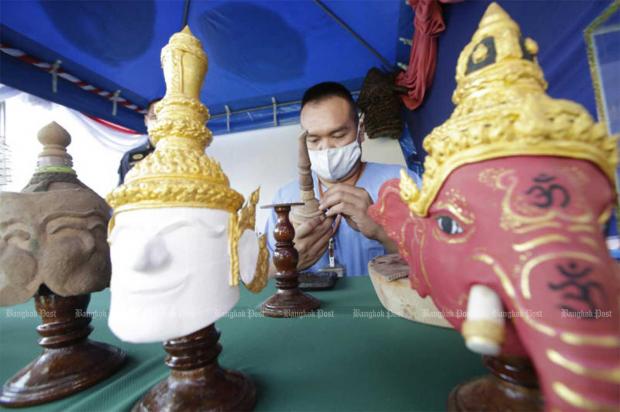 An inmate tries his hand at a new skill as an occupation training course is launched at Nonthaburi provincial prison on Friday. The aim is to give inmates job skills so they can turn a new leaf when they leave prison. (Photo: Pornprom Satrabhaya)

Nine new coronavirus infections were reported on Friday, quarantined arrivals from seven countries, raising the total number of cases to 3,861.

Two of them were earlier treated overseas for Covid-19 disease.

The Centre for Covid-19 Situation Administration said the new cases were from Lebanon, the Philippines, Switzerland, India, Kuwait, France and the United Kingdom.

The case from Lebanon was a 56-year-old Thai masseuse who arrived on Nov 1.

The case from the Philippines was an Indian engineer, 37, who arrived on Nov 6.

The case from India was a 45-year-old Indian woman who arrived on Nov 7.

From Kuwait, a 43-year-old Kuwaiti arrived on Nov 7 and his infection was detected on Nov 10.

The eighth and ninth cases arrived from France and the UK, and had both earlier been detected with the coronavirus disease and treated.

A 43-year-old Frenchman who arrived on Oct 30 and was quarantined had been infected and treated in September. On Nov 11, he tested positive and was being treated at a private hospital.

A retired 66-year-old British man who arrived from the UK on Nov 6 had been previously diagnosed infected on Oct 16 and treated. On Nov 11 he tested positive and was being treated at a private hospital.

All nine cases were asymptomatic, the CCSA said.