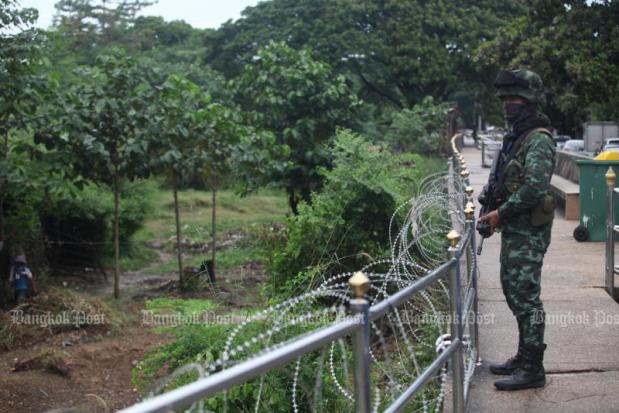 A soldier from the Naresuan task force stands guard on the Thai side of the border with Myanmar in tambon Tha Sai Luad, Mae Sot district, Tak province. (Bangkok Post file photo)

Seventeen of the 21 new cases were Thais, including two women who sneaked into Mae Sai district of Chiang Rai late on Thursday night. One of the women showed symptoms before she crossed the border from Myanmar, while the other developed a fever on Sunday.

Other Thais included a man returning from India via the United Arab Emirates on Nov 15, a woman arriving on Nov 21 from Italy via Qatar and two women arriving from Germany via Qatar on Nov 21 and 26.

Two women returned from Switzerland on a Nov 22 flight via Germany, and three women arrived from Japan on Wednesday.

A woman flew in from the United Kingdom on Nov 23, the same day that two women returned from Russia and Denmark.

A woman returned from the Netherlands on Saturday, while one woman and one man arrived from Switzerland and the United States via Taiwan respectively on Nov 22.

The foreigners were a Japanese man arriving on Nov 22, a French man on Nov 23 via Germany and a Russian man on the same day.

The last foreigner was a man from Oman who arrived on Thursday.

foreigner : a person from outside the country being talked about -

respectively : in the order in which they were mentioned - ตามลำดับ