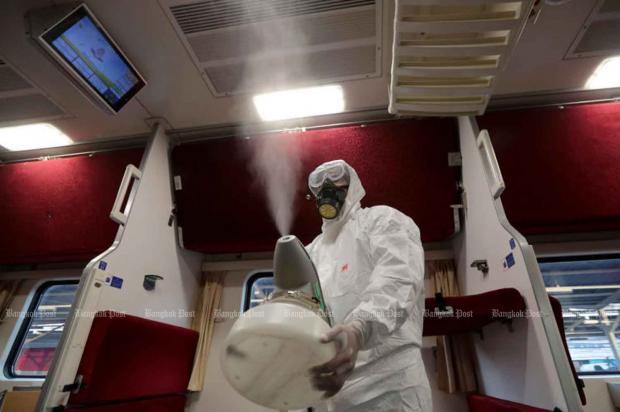 A disease control worker sprays disinfectant inside a Chiang Mai-bound train before passengers board, part of Covid-19 control measures, at Hua Lamhong station in Bangkok on Thursday. (Photo: Chanat Katanyu)

The Centre for Covid-19 Situation Administration said  26 of the 37 local infection cases were linked to the outbreak in Samut Sakhon province. The other 11 were still under investigation.

So far, the outbreak that started at the Central Shrimp Market of Samut Sakhon province had spread to 31 provinces.

There have been 8,810 people tested in Samut Sakhon. Of those tested, 1,308 (15%) were positive. Health officials planned to test about 10,000 people in Samut Sakhon to ensure Covid-19 control, the CCSA said.

Of the 1,308 infected migrant workers, about 500 were admitted to hospitals, with a few cases of serious illness. The others were quarantined only.

Since the pandemic started early this year, local Covid-19 cases have consisted of 3,967 local infections, 1,943 arrivals and 1,308 migrant workers, the CCSA said.