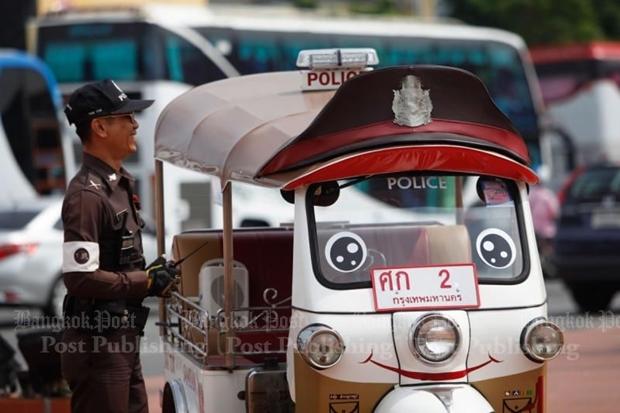 A policeman stands beside 'Jaa Tuk Samran', a tuk tuk with the front looking like a sergeant and designed by Samran Rat police station. (Photos by Jiraporn Kuhakan)

Traffic police at the Samran Rat police station in Bangkok have their own special vehicle.

It even has its own name: 'Jaa Tuk Samran'

That is because it really is a tuk-tuk that has been painted to look like a traffic sergeant.

From morning until evening, Jaa Tuk can been seen patrolling the streets near the police station and even  giving people free rides if they need them. 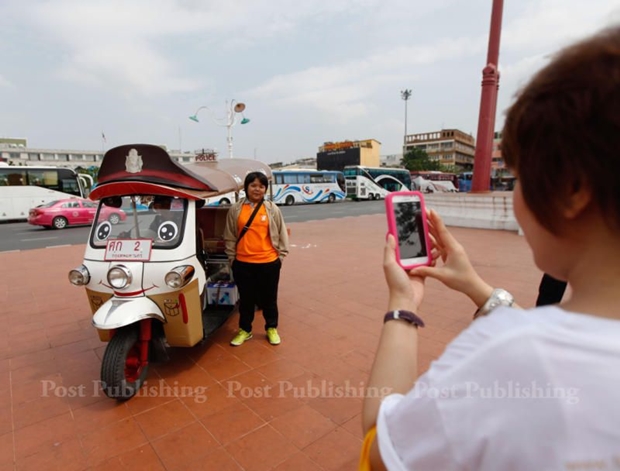 Not surprisingly, Jaa Tuk has become very popular with tourists and passersby who want to have their photos taken with the police tuk-tuk.

Click "play" to listen to Bangkok's happy tuk-tuk and "Download" to keep this file for educational purpose.

passersby : people who are going past somebody, a place, an event, etc. - ผู้คนผ่านไปมาตามถนน

patrol : to move regularly around a place in order to prevent trouble or crime - ลาดตระเวน

sergeant : a police officer of middle rank, below that of inspector - จ่า, นายสิบ

special : not ordinary or usual; different from what is normal; more important than others; deserving or getting more attention than usual - พิเศษ