Four characters, white and privileged, play out their favourite game of seduction. They frolic in the sun, nurse their ego, indulge in excesses, splash in the pool of a luxurious villa on an island in the Mediterranean -- also the island where dark-skinned migrants arrive like phantoms after their perilous journey across the sea.

Opening in Bangkok this week, A Bigger Splash is a sun-kissed drama by Italian director Luca Guadagnino (I Am Love) and featuring strong performances by the four leads. Tilda Swinton plays Marianne, a middle-aged rock star who's recovering from a vocal cord operation that prevents her from speaking. Marianne's husband, the kind and caring Paul, is played by Belgian actor Matthias Schoenaerts. Then we have the rambunctious Ralph Fiennes, in one of his most spectacular turns as the record producer and Marianne's ex-lover Harry; truly, watching Fiennes pushing the limits of his character (and his own as an actor) is quite something. Lastly, we have Dakota Johnson as Harry's possible daughter Penelope -- it's not even clear if this nubile nymphet is really his blood relation -- whose mere presence gives off an erotic vibration that disturbs everyone.

A Bigger Splash is a remake of a 1969 French film La Piscine by Jacques Deray. Director Guadagnino and his screenwriter David Jajganich update the material, give it a contemporary touch, especially the intersection between the frolickers and the migrants, and allow their actors so much room to shine.

Reached by phone in Italy, Guadagnino speaks to us about the film. 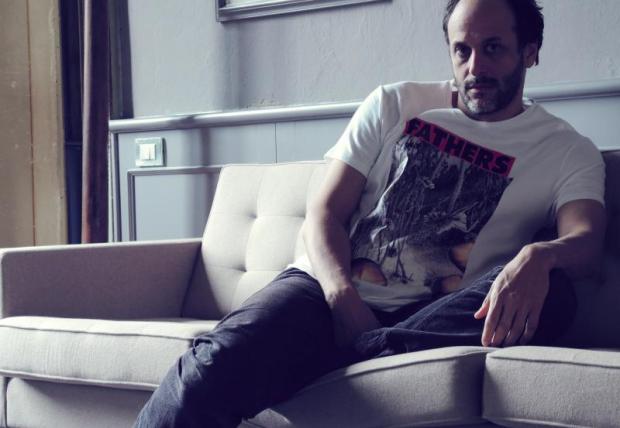 Why did you base A Bigger Splash on the French film La Piscine?

Because it gives me a good chance to investigate the issues I found very close to me: desire, possession, power over one another, regret. In the original Jacques Deray film, those were themes that are not exactly at the centre; they were looming under the surface. I thought it was an occasion for me to have much more control of the material.

When the film opens, we see Marianne, the Tilda Swinton character, in a rock concert before thousands of people. But after that, Marianne hardly speaks at all.

The idea that Marianne doesn't speak throughout the film was Tilda's idea. It's a great idea that I felt compelled [to realise] because we are having a character so central to the story and yet she'd have no line of dialogue and have to rely on body language to express emotion.

Is the Marianne character based on real-life rock stars? David Bowie? Chrissie Hynde?

My imagery was Chrissie Hynde from The Pretenders, not David Bowie. But David Bowie being David Bowie, he's a legend, he's in our DNA.

What about Harry, the extravagant, uninhibited character played by Ralph Fiennes?

I spoke at length with my screenwriter. We wanted to make a movie that somehow was a reflection of the clash of generations. And I wanted the story to have a kind of boisterous father who was so strong in the way he enjoys the freedom of impulsiveness, instead of containment. It was interesting for me to explore this character. Ralph Fiennes is terrific in accepting to go very far in the personification of Harry.

The story also involves refugees arriving at the island.

We set in the movie in Pantelleria island in the Mediterranean. We wanted to be consistent to the place where we were shooting, and we wanted to have some storyline that felt organic to the reality of it. We investigated everything about the island, which includes the refugees. That helped us create a confrontation between the four characters and people who are invisible to them, to see how they behave towards them.

And that makes the film feel political even though you didn't try to make it political.

Lastly, Dakota Johnson. She's such a mysterious and irresistible presence.

I love Dakota. If I wasn't already engaged, I would've proposed to her. She's such a clever and talented woman, and the camera loves her. When you talk with your actor about his or her character, you have to realise that this is conversation that goes on for months, and there's not just one way to discuss a character. You just keep going and conceive it. [Johnson's character] is one of those moments.