Paisley Park to open to fans as Prince museum

NEW YORK - Paisley Park, Prince's state-of-the-art studio complex that held a mythic status for fans who entered it during the pop legend's life, will open to the public as a museum. 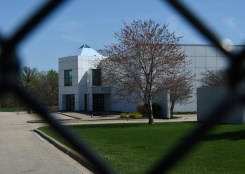 Prince's huge Paisley Park compound in Minneapolis will open to the public for tours in October.

The "Purple Rain" star's estate said it was teaming up for the project with the company behind Graceland, Elvis Presley's home-turned-museum in Memphis that draws more than 600,000 visitors a year.

The 5,000-square-metre complex will open for tours on October 6, one week before fans descend on Prince's Minnesota hometown of Minneapolis for a memorial tribute concert at the new US Bank Arena.

Prince's sister Tyka Nelson said that the pop star had long hoped to allow the public into Paisley Park, which he opened in 1987 in the Minneapolis suburb of Chanhassen and where he died on April 21.

"Opening Paisley Park is something that Prince always wanted to do and was actively working on," Nelson said in a statement Wednesday.

"Only a few hundred people have had the rare opportunity to tour the estate during his lifetime. Now, fans from around the world will be able to experience Prince's world for the first time as we open the doors to this incredible place," she said.

A plan submitted to the city of Chanhassen said that fans would go on 70-minute guided tours that cover Prince's recording and mixing studios, his concert hall and his so-called NPG Music Club, which he kept private.

In line with Prince's guidance when he threw parties at Paisley Park, the museum will serve only vegetarian food and no alcohol, the plan said.

Prince, fresh from the acclaim for "Purple Rain," invested some $10 million -- about twice as much in 2016 dollars -- to build a top-of-the line recording center at Paisley Park.

Prince initially rented out Paisley Park to artists but a decade later made it his exclusive domain.

Few fans were able to see Paisley Park for themselves, giving the complex an added aura for those who entered its gates.