Utain Boonorana talks about being in the 'Y novel' genre

Utain Boonorana has been known among his readers as "Mor Tud" or, "the gay doctor". A medical professional by trade, Utain spends his free time penning books about gay romance. His latest novel is Kue Ter Nai Hua Jai (You're In My Mind), published by Hyacint, a publishing house dedicated to LGBT literature, released this month. 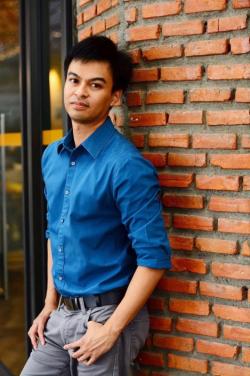 Which book is on your bedside table now?

Hide by Matthew Griffin. The book is about a romance between two soldiers. They meet during World War II and maintain a relationship since. Back then homosexuality was not only a taboo but, in some states, a criminal act with a penalty as heavy as imprisonment, so both men needed to hide their sexual identity and relationship. The book alternates between the past and present. The couple finally live and grow old together until the present day when society accepts homosexuality and in some states gay marriage is legalised. The book is full of romance and drama. Unfortunately, heartwarming gay novels hardly exist in our society.

What was the last book that made you laugh or cry?

For One More Day by Mitch Albom. In his best-seller, Albom writes about a guy who is rocking the bottom of his life. His wife has left him, his daughter hates him and he is fired from his job. With nothing left in his life, he drives back to the home where he grew up in order to commit suicide. A car accident leads him to a near-death experience where he has a chance to meet his late mother, who died a decade ago. Finally, he receives another chance, another day to stay with his mother, to fix old wounds and become a loving son again. It is the book that makes us think about the value of time. A day in our life can be priceless if we spend it with someone we love and many of us might want to exchange many things in life just to spend that day. The book drove me to tears from the first to the last page.

As a writer, which book inspired your work?

I am a gay person who writes gay novels. Thai readers call this genre of book "Y novel". Interesting enough, Y novels in Thailand are mostly written by female writers, who imagine gay relationships. With all due respect, their works are romantic novels in the same fashion as novels about heterosexual relationships.

I took books of David Levithan as a model. He writes about realistic relationships of gay men. He can portray exact characters of gay men, with the balance of homosexuality and masculinity. His works are not too serious nor overly dramatic, and there are lessons in life and perspectives hidden between lines. I recommend Boys Meet Boys as an example of a Y-novel, which portrays relationships of humans, not lust and sex scenes. It is a lovely romance of two boys who fall in love.

What is your all-time favourite book?

Every Day by my favourite writer, David Levithan. Apart from being a good novel, the book also serves as a psychological lesson to make people understand that love and sex in terms of naturally assigned gender are not the same thing.

Both are just a medium. Yet, an e-book is an alternative for both readers and writers. In terms of career, an e-book bypasses publishing house and provides new access for people to publicise their content and become writers. Some people even publish their own works via e-books. I foresee the gap between writers and readers will be narrowed, continuously.