'As writers, we should try to understand what we are not," declared Indonesia's star novelist Eka Kurniawan at the 13th Ubud Writers and Readers Festival (UWRF). "I live in the city, but I try to see what life is like for rural people. As a man, I seek the woman's perspective."

Southeast Asia's leading literary event, held in Bali from Oct 26-30, emerged stronger from facing censorship last year over talks marking the Indonesian massacres of 1965, by questioning who gets to tell the story of the crises wracking our world. Kurniawan's empathy suited the festival's stated theme of the Sanskrit words "Tat Tvam Asi" or "I am you, you are me" (the festival's official translation).

Kurniawan had returned to Ubud to discuss the feline spirit possession in his novel Man Tiger, which was long listed for this year's Man Booker Prize. His magical fiction, bracketed with Gabriel Garcia Marquez, first drew raves in Beauty Is A Wound, a supernatural parable of Indonesia's past. In making indigenous mindsets relatable to outside readers, Kurniawan sets a benchmark for Asean authors.

"Strong Women" emerged as a sub-theme, even after the withdrawal of the feminist icon, Erika Jong, author of the classic Fear Of Flying and sequel Fear Of Dying. Jong didn't come to the festival because she felt it imperative to stay Stateside to support another strong woman's presidential bid.

In her keynote speech, Sino-Canadian actress Anastasia Lin articulated how China menaces critics abroad through family, career, visa, influence and other back channels. Lin had been denied entry to China due to her films about Falun Gong and Chinese organ harvesting, making global headlines.

Korean-American Suki Kim recounted her undercover mission to gauge the psychology of North Korea's elite young leaders-in-training. The real stir was going public about how her brave scoop had its authority undermined by being marketed as memoir, her journalism dismissed as "a woman's emotional journey". Kim asserted that bias against women, youth, non-whites and migrants was the root of such belittling in the media.

The UN's recent call for "constructive journalism" came under scrutiny by veteran reporters, who concluded that skewing news to morality missed the essence that neutral journalism is the epitome of being constructive. Jakarta Post editor Endy Bayuni recalled Indonesia's response to sectarian papers fanning a conflict in Maluku, when "peace journalism" failed to report crucial facts. Given the local history of Suharto suppressing news about race, religion, labour or other threats to "harmony", Bayuni felt that "the only time journalists should become part of the story is to fight for freedom of expression".

A similar righteous tussle involved two speakers who'd earlier clashed at Brisbane Literary Festival, where Sudanese diversity advocate Yassmin Abdel-Magied had stormed out of a speech by Lionel Shriver (author of We Need To Talk About Kevin). Abdel-Magied then accused Shriver in The Guardian of defending cultural appropriation, a universal norm throughout history that some deem politically incorrect.

Shriver -- who projects a future economic collapse in The Mandibles -- had argued that authors be "allowed" to tackle any topic beyond personal experience. Abdel-Magied, whose backstory supports her memoir and career, claimed that fiction about subjects who hadn't granted permission was colonial grab to "exploit the stories of 'others'", with "the stench of privilege" that "lays the foundation for prejudice, for hate, for genocide". Observers pondered how those who ring-fence ethnic subjects like a patent might affect festivals like this that invite poly-cultural perspectives and platform novelists who write about what they are not.

Meanwhile, there was open season on the Trumpled state of America and its imperilled pivot to Asia. In that and other current affairs sessions, the breakout "discovery" was Thai pundit Voranai Vanichaka. "Coming from Thailand," he remarked, "hearing people talk openly feels so refreshing."

In a diverse Poetry Slam at Taman Baca, observation and narrative paled beside homilies against privilege, which earned appreciative finger-click applause in this New Ager town. The Malaysian winner, second runner-up and majority of slammers were women, while one of the judges was the reigning Individual World Poetry Slam Champion, Emi Mahmoud, a Sudanese-American from Darfur.

The compère Doni Marmer won last year's slam with a gay poem; inheriting that mantle, Uphie Abdrurrahman of Bandung aimed rainbow rhymes at the prejudice in dating app preferences. Several poets asserted a modern take on Islam, including one from the Australian-Muslim rap group The Brothahood, who topped the festival music bill.

A showcase of Indonesian film featured screenings and panels of writer-directors. Joko Anwar -- whose gritty A Copy Of My Mind screened in Bangkok -- spoke about how to elude censors. Young director Wregas Bhanuteja, fresh from his award at Cannes, beguiled viewers with audaciously intimate shorts made in Javanese. Author/auteur Richard Oh testified to Indonesian cinema's health, but lamented how the fad for shooting novels limited the visual potential of film, an idealism he explored in Melancholy Is A Movement.

"I was struck by how warm and loving the festival felt," reflected De Neefe while awaiting the closing session, a tribute to the late garden designer and Bali culture vulture Made Wijaya. "There was a real outpouring of compassion."

A meta-panel about literary festivals noted how they are becoming more cross-cultural yet also tailoring to the spirit of their place. Cultures with more of an oral tradition are spawning festivals of issues or thinkers. Thailand's own "ideas festival" BangkokEdge, which will reprise in November 2017, also acts as a rare forum for the city to reflect upon itself.

UWRF began as a response to the 2003 Bali bomb and retains a mission for social justice. That integrity appeals beyond visitors and expatriates to socially-conscious Indonesians, and the 500 bookish youngsters, who apply from across the archipelago to be festival volunteers. In a region that puts a pretty face on problems, if beauty is indeed a wound, books might just be a cure. 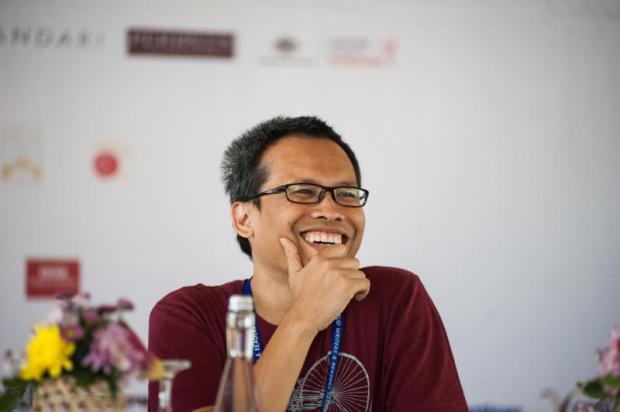 Exhibit examines the language of the lens

A modern twist on tradition