Stanley Kubrick and David Lean will illuminate the big screen of Scala this long weekend, a fitting culmination to the programme of classics screened in celebration of His Majesty King Bhumibol Adulyadej. Since July, the Thai Film Archive has been showing vintage films that His Majesty watched in cinemas when they first opened in Bangkok half-a-century ago, and this week the project concludes with two majestic titles, Kubrick's Spartacus (screening Sunday at noon) and Lean's Lawrence Of Arabia (Monday at noon).

Spartacus (1960) stars Kirk Douglas as a titular slave-hero in the Roman Empire. With a screenplay by Dalton Trumbo, written in hiding as he had been blacklisted by the Hollywood's anti-communist squad, the film was praised for its bold approach when it first came out, a gladiatorial epic and slave-revolt saga with no happy ending and a cynical, honest prophecy that slavery, despite Spartacus's heroic struggle, wouldn't end until 2,000 years later.

This is not the most celebrated work by Kubrick, then 31, eight years before he made the crowning 2001: A Space Odyssey. Besides its dark interpretation of the legend, Spartacus is a Biblical adventure in the studio tradition that relies mostly on the magnetic power of Douglas and the spectacle of the battle scenes.

As Spartacus, the actor, trimmed and toned, defies the Roman elite with his muscles and dignity while the film plays against the backdrop of Roman decadence and the rise of dictatorship. The film also stars Jean Simmons as a female slave, young Tony Curtis as another slave, and Laurence Olivier as Crassus, a crooked, power-lusting senator.

That's all fine and we're eager to watch it on the big screen. But the real highlight will be on Monday with Lawrence Of Arabia, to be screened in the luminous restored version with all the desiccated splendour of the desert. Lean's 1962 masterpiece is his most famous, most enduring film, its visual sweep still thrilling while its political implications and post-colonial mess are still relevant in the Middle East. 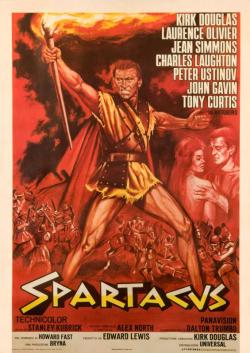 Peter O'Toole plays T.E. Lawrence, and we see him crash his motorcycle in the opening scene, the tragic death of a war hero and one of the most divided characters in history. Then the movie flashbacks to the Hejaz desert during the first days of World War I as Lawrence, a former archaeologist recruited to work for the British army, tries to persuade various Arab tribes to rise in revolt against the Ottoman Empire. The casting -- in those days you couldn't expect ethnically accurate actors -- includes Alec Guinness as Prince Faisal (in real life the prince would become the king of Iraq), Anthony Quinn as the warrior Auda Abu Tayi (in real life a Bedouin horseman known for his audacity) and Egyptian-born Omar Sharif as Sherif Ali.

Lawrence Of Arabia is best-known for its cinematic vista (shot on 70mm by Freddie Young), the endless expanse of desert that dwarfs its characters despite their grand mission -- and of course this is something worth appreciating on the big screen. The story focuses on Lawrence's and Faisal's attack on Aqaba, a strategic port city held by the Turks, and how the guerrilla tactics of the two men manage to undermine the enemies.

The film also portrays the conflicted allegiance that, in history, saddened and disillusioned Lawrence to the point that he later refused to be knighted by King George V. Lawrence swears his loyalty to the British army, but he knows that the Allied forces are conspiring to trick the Arabs -- his friends and comrades in arms -- to fight for them while preparing to ignore the promise of independence. That his country cheats his Bedouin friends -- even though they help the Allies win the war -- is something that breaks Lawrence's heart to the very last day of his short life.

Lean's film manages to hint at this soul-crushing conflict -- as well as at Lawrence's sexuality. For the full effect, the film fictionalises a number of incidents, conflates battles, ignores background stories and exaggerates heroic acts (the rescue of Gasim, a fellow traveller who gets lost, and who Lawrence risks his own life to save; in the film, Lawrence is celebrated for his bravery while in real life, Gasim is punished for breaking the code of the tribe).

And of course there's the most troubling scene in Deraa, a Syrian outpost where Lawrence is captured by the Turks: the film shows Lawrence being tortured and possibly raped by the enemy soldiers. But this rape incident is the most debated chapter in his autobiography and for nearly a century scholars are still debating whether Lawrence invented the episode either out of sadomasochistic tendencies or political cynicism. In his book Seven Pillars Of Wisdom, Lawrence is vague about what really happened.

Still, that all doesn't seem to matter when we watch Lawrence Of Arabia, the kind of film they don't make anymore, anywhere in the world: a grand, audacious historical epic with solid characters and broad visual brushstrokes that are only possible when you shoot on film.

Spartacus is showing this Sunday at noon at Scala. Lawrence Of Arabia is showing on Monday at Scala, also at noon. Tickets cost 100 baht.