Halfworlds is an original production of HBO Asia, a fantasy series that takes place in an alternate reality, where the demons of local myths live their immortal lives beside humans in secret. In the new season, which viewers can watch for free online, HBO for the first time has used a Thai director and cast in a production that relies on Thai mythology and vibes. 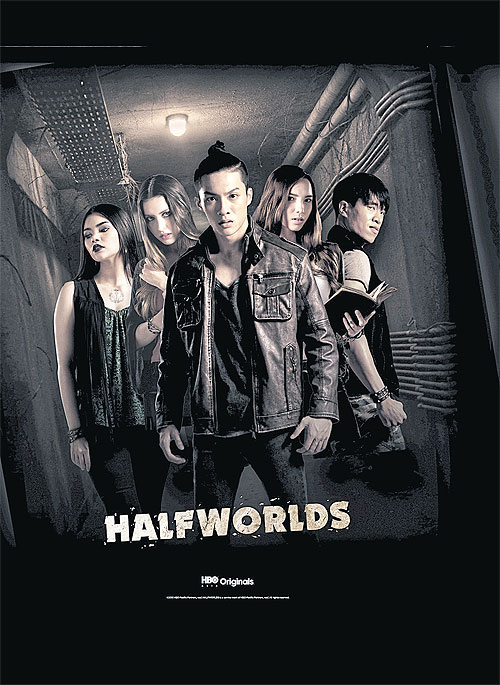 Young researcher Juliet (Tia Tavee, a Thai model who in 2014 competed on Asia's Next Top Model) tries to follow in her father's footsteps in uncovering the mysterious peesaj, the immortal spirits of Thai folklore, in her search for a mysterious artefact. Fearing their discovery, after having lived alongside humans in secret for centuries, the peesaj send the appropriately named Fyter (Peem Jaiyen, of Hormones) to silence her permanently. The series features talent from other Thai stars, both familiar and fresh, such as David Asavanond, Nicole Theriault, Jeeja Yanin, Charlie Ruedpokanon, and newcomers Emma Grant and Myra Molloy.

The first season of Halfworlds took place in Jakarta, Indonesia, featuring a cast and crew that was largely local. The second season, currently on its third episode after premiering online for free at hboasia.com on Jan 22, takes place right here in Bangkok.

Director Ekachai Uekrongtham, known to most Thai audiences for his 2003 drama Beautiful Boxer and the hit musical Chang And Eng, helms this fantasy series in the first TV series he's directed. Ekachai has made several films in Thailand and Singapore, and put on several theatre performances in Singapore.

Halfworlds revolves around the clash between mortality and immortality. It's about two groups of people: the fragile humans, and the powerful and undying peesaj. I won't spoil it with too much detail, but the juxtaposition between the fragile human Juliet and the unbreakable Fyter is, in my opinion, the fuel that drives the relationship.

It's a sort of forbidden-love story; the narrative core will follow the developing relationship between Juliet and Fyter, surrounded by other relationships of various types, from siblings to friends to parental love, with permutations and intersections with one another. Being a long-form series allows us to explore the story from various angles, while still having them tie back together into one narrative.

This is your TV series directorial debut, after having done multiple films. How was the transition? What are some of the differences you've experienced between directing TV and film? 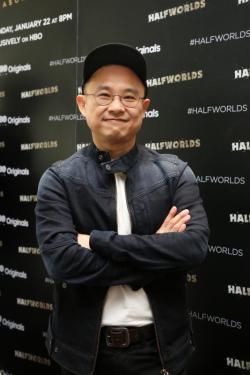 In terms of the creative process, I wouldn't say there's much of a difference, as HBO's idea is to create TV series with film-like qualities. Therefore, the approach I use in developing the episodes and the production design is more or less the same as in making a film. I just consider this to be a very, very lengthy movie, more or less equal to six full-length films.

How much of the crew is Thai?

Many of us, as well as many of other parts of the project, are Thai. The set designer is Thai, for example, as we wanted to create a fantasy set that wasn't too fantastical, so we wanted a Thai person to create a convincing Bangkok-based studio set.

I think it's an important collaboration between Asian production teams, many of them very talented. Be it from Indonesia or the Philippines, everybody rises to the challenge and elevates the project. It feels like an Avengers kind of team-up, bringing together the best of Asia, each getting their moment to shine.

How different is Halfworlds from your past projects?

I guess you could say I've never worked on a project quite as graphically violent. I've worked on violent action films before, like Skin Trade (2015), but since the story revolves around the trans-human peesaj, there is quite a lot of blood and gore involved.

I've worked on action films before, but not to the extent of showing someone's throat get graphically slashed or someone's heart pulled out of their chest. The situations and the characters call for very extreme physical measures.

To me, though, the violence is just a force to propel the characters towards drama. The violence erupts when characters are faced with situations so severe they must express themselves physically.

Tell us about the new cast members. Why did you choose to cast so many relatively new faces in this project?

One of the things HBO made clear from the beginning is that they wanted a series that appeals to the young. Therefore, we had to find a relatively fresh cast of actors -- though I wouldn't consider Peem a newcomer, necessarily. He starred in Hormones and several other projects before. He also has a youthful look while being capable of portraying drama very well. Definitely has a lot of potential. Initially, I was worried if he would be able to act in English, but it turns out he's quite fluent.

Myra's character, meanwhile, required an actress with a great singing voice. I felt that acting was something I could work on, though singing is something inherent in each person, so I decided to cast someone based on singing ability first. As for Tia Tavee, her experience as a model gives her a confidence that fits with the character of Juliet, who is supposed to be a fearless person.

What are some Bangkok locations we can expect to see in the series?

HBO has actually specifically requested we have scenes in Wat Phra Kaew and surrounding areas, so there's that. We also have some scenes in Old Town Bangkok, along the Chao Phraya river and the Sathon area. There will also be vaguely familiar Bangkok locales that you have never seen, and have no idea where they are. It's all thanks to the production manager for making such a convincing Bangkok neighbourhood set for the studio.

airs on HBO and can be viewed online at http://hboasia.com.