Inspired by the late King, a grand Bangkok project aims to inspire a new generation of bookworms

Businessman Boonchai Cheauchanwong was more than happy to hear that the "Bangkok City Library" will be opening in March, two months ahead of schedule.

"I am looking forward to the modern public library. It will help children learn, and benefit our entire city," Mr Boonchai, 49, said.

He added that the facility is essential to improving Thais' quality of life and their access to knowledge and learning.

"Access to facilities including a public library is one of the basic rights city residents deserve, courtesy of the government," he said.

Mr Boonchai was talking about a project by the Bangkok Metropolitan Administration (BMA) to convert an old building at Kok Wua intersection into a new city library.

The project is part of a campaign to promote the capital as a "City of Learning", which aims to promote a culture of reading.

The library was originally set to open in June when it was thought renovation work on the building where the library is housed would be complete.

Mr Boonchai urged officials to spice up the library and come up with exciting activities to grab people's attention. He also urged the public to use it frequently to make the most of the venture.

"If there are only a handful of library visits, we will be forced to cut the library's service hours, or worse still, close it entirely," he said.

Deputy Bangkok governor Chakkaphan Phewngam said work is being carried out as quickly as possible to install facilities in the library so it can open in March.

The Bangkok City Library initiative was devised during an event held in Bangkok in 2013 when the city was named the World Book Capital by Unesco.

Pranee Satayaprakop, deputy city clerk said the BMA wanted to put an emphasis on reading among the public and promote learning with the new library.

However, in a city where more people can be seen with their faces buried behind a smartphone than a book, the BMA is hoping more bookworms will be born once the library is launched.

Surveys conducted by the private sector found that Bangkokians read only five books per year on average.

The BMA was awarded a 30-year contract by the Crown Property Bureau, that started in 2015, during which it will pay the bureau 20 million baht a year.

Located at Kok Wua intersection, the four-storey building has been well maintained despite being more than 80 years old.

Right Man Co later won the contract to renovate the building and set up the new library, with a budget of more than 29 million baht. A ceremony to mark the beginning of refurbishing the building took place at 9.29am on Feb 28.

Ms Pranee said the BMA is trying to look for creative activities that will engage young people. 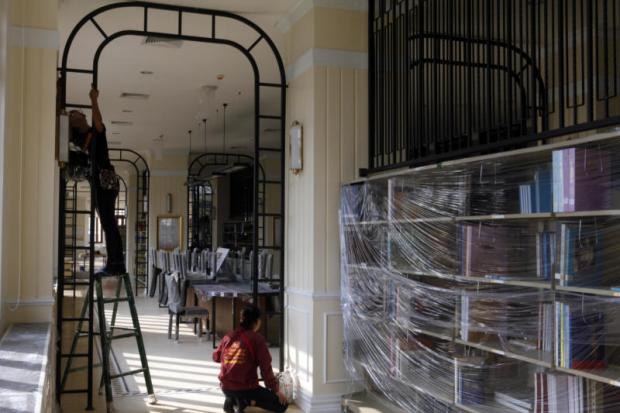 Workers add the finishing touches to the new Bangkok City Library ahead of its grand opening next month.

"We want the new city library to become a lively meeting spot," she said. Rooms where people can share creative activities will be provided.

The strategic location of the new library is a factor that the BMA believes will attract local and foreign visitors alike, she added.

The Bangkok City Library will be located on Ratchadamnoen Klang Avenue and is easily accessible by car and public transport.

It is just a stone's throw away from Khao San Road, the capital's backpacker hub. Students will be encouraged to use the library space to work and research.

Employees working at 36 libraries under BMA control will take turns working at the new library.

The BMA will also ask retired city officials who are experienced in arranging books to help at the library in return for a 360-baht daily allowance, Ms Pranee said.

According to City Hall, the Bangkok City Library will open daily from 8am to midnight, except on Mondays.

The library could potentially be kept open 24 hours a day if there is enough demand for it.

With a total of 4,880 square metres, the library will feature a wide selection of reading material for children and adults, and will feature facilities for disabled people.

Unlike other city libraries, it has been specially created in remembrance of the late King Bhumibol Adulyadej, Ms Pranee said.

Conceptualised by "following in the footsteps of His Majesty King Bhumibol Adulyadej", the mezzanine floor will be an ideal place for kids and family.

This floor will feature a children's section plus interactive learning materials and games based on the work the late King pioneered, such as his biodiesel scheme and waste water management system.

The games will allow children to learn about the king's works and activities, Ms Pranee said.

On the first floor there will be several sections including a borrowing and return desk, exhibition rooms, a newspaper and magazine corner, and a tourist information desk.

Entering the first floor, visitors will be greeted with a large portrait of the late King. There are sculptures containing Rama IX's remarks about the importance of reading and curiosity in pursuit of knowledge.

A section for the disabled will be housed on this floor. It will provide audio material for people who are hard of hearing and books in Braille for the blind.

The ornamented stairs leading to the second floor will take visitors to a kiosk where they can view a video presentation of the late King's life from childhood.

The highlight of the section will be a feature looking back to the celebrations held to mark the 60th anniversary of King Bhumibol Adulyadej's accession to the throne in 2006 when members of almost every royal family in the world gathered in Bangkok to congratulate him.

Included on this floor will be international literature, reference books and rare publications. Functional rooms for meetings and seminars will be featured.

The third floor will be dedicated to the late King's projects and a collection of his achievements in nine different areas: city planning, transportation, environment, culture, the public's safety, medical issues, economic issues and livelihood, education and collaboration among state agencies.

The floor will also house a collection of documents from all 50 districts and special publications created by agencies under BMA control.