View from a veteran

The list of hits he has created in the past 20 years is long and staggering: Visute Poolvoralaks, perhaps Thailand's best-known film producer, is the man behind the renaissance of Thai cinema in the mid-1990s with Dang Bireley's And Young Gangsters, Nang Nak and Satree Lex, before becoming part of the hit-making machine GTH to push Fan Chan, Hello Stranger and the highest-grossing Thai film of all time, Phi Mak Phrakanong. Estimated box-office intake commandeered from his desk: nearly 2 billion baht.

This week, Visute finds himself in a new venture. After the break-up of GTH in late 2015, he founded a new studio, T-Moment, and after a year gestating, they released their first film yesterday, a cop comedy about overweight policemen, Oversize Cops.

"We have several projects in the works, but we opened with Oversize Cops because it fits the character of T-Moment," said Visute.

Oversize Cops features no known cast, instead relying on the quirky appeal of the story. In the film, four chubby police detectives try to lose weight and catch a bank robber. It's a break from the throng of familiar romance and comedy that has dominated Thai film the past few years. 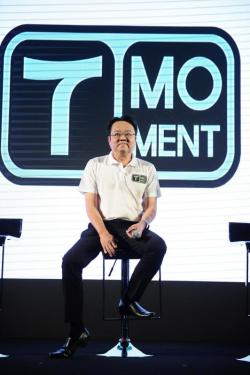 "Some people told me the film looks like a throwback to the 1990s studio movies," said Visute. "I'm not sure what they mean. But for me, I get bored easily and always try to find new stories. We shouldn't keep repeating the formula but look for new material all the time."

At a time when the box office for Thai films is suffering a slump amid the onslaught of Hollywood imports, Visute, who also serves as chairman of the National Motion Pictures and Contents Associations, knows that the road ahead is not going to be entirely smooth.

Total Thai box-office value is estimated at around 4.5 billion baht, with Hollywood films comprising the big chunk out of it. The market share for home-grown movies, according to Visute, has declined from 18% to around 13%. Last year, several Thai films made fewer than 1 million baht at the box office, while hits are of course even harder to find.

To Visute, the main factor is Hollywood's increasing might.

"In the past, Hollywood had big summer movies while the rest of the year Thai films could find room to breathe," he said. "Now Hollywood programmes their big films all year round, with major releases every month, and it's hard for local movies to squeeze in."

It's true that the quality of Thai films is inconsistent. But Visute emphasises that the playing field is not level. How can a Thai budget and Thai technology fight with the heavyweights of Hollywood?

"There's only one stage and everyone, no matter how big or small, is forced to battle it out," he said. "If you have 180 baht and you go to the cinema, you'll trust the Hollywood product. It's natural but it's also very tough for the smaller players."

Making a film for a specific audience, such as for certain regions or spoken dialects (see main story) is a clever adaptation, Visute said. In many countries, there are films made for specific parts of the country, and he believes Thai films will benefit more from that approach.

"We plan to have two to three films a year. Let's see how we go from there."

Seeing the value in nature