More than 50 artists from across Isan gathered for the annual wai kru ceremony in U Thong, Suphan Buri. World Beat was there to watch them

Twenty-five years ago I joined a team from the Japan Foundation on a tour of Isan to meet and talk to molam artists, as part of a project on Lao music in the region. We met up with the then-president of the Molam Association, National Artist Kane Dalao, and his two female molam partners, Boonpeng Faiphewchai and Chaweewan Damnoen (both later awarded national artist status), and joined the trio as they performed concerts in villages for social ceremonies like weddings in and around Khon Kaen.

For one concert, we travelled to a remote village. Before the musicians took to the tiny home-made stage, they prepared offerings for a private ritual to pay respect to their teachers, known here in Thailand as the wai kru ceremony. I had the great good fortune of being invited to photograph Chaweewan make her traditional offerings from banana leaves and also the wai kru ceremony itself. The photographs ended up being part of the Jim Thompson Foundation's Molam Bus Project.

And then I got a call from the team that put together the bus project asking if I wanted to attend the annual molam wai kru ceremony, which for the past 10 years has been held at Wat Khao Kampeng in U Thong district, Suphan Buri province. This annual event, the brainchild of the temple's abbot Dr Suwan Pratchakul, brings together molam artists who specialise in the more traditional styles of molam, such as the poetic lam glawn style; more than 50 current molam artists from all corners of Isan attended this year's ceremony. 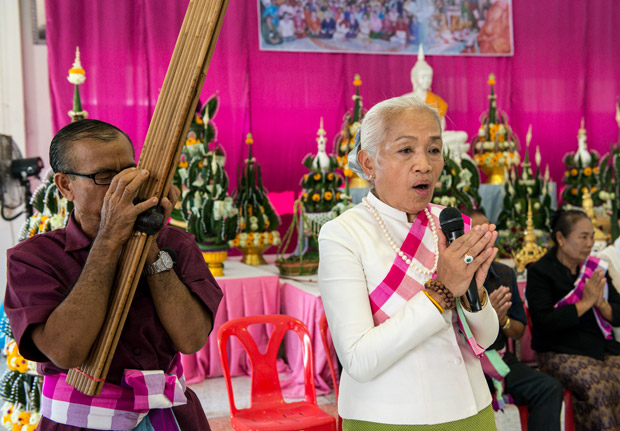 The wai kru ceremony is thought to have originated from ancient animist beliefs that came to Thailand from India, possibly via Brahmanism, and for the most part has been a folk tradition orally passed down from generation to generation. Many foreigners know it from the wai kru ceremonies performed by muayThai exponents (called wai kru ram muay), while Thais know it from paying respect to their teachers at school.

In the main hall of temple, various offerings (some of them wonderfully-constructed with folded banana-leaf animals or mythical creatures, showing their roots in local animist practices) were placed on a table in front of the Buddha, and in the middle of the hall, a huge offering stood for the group to gather around. 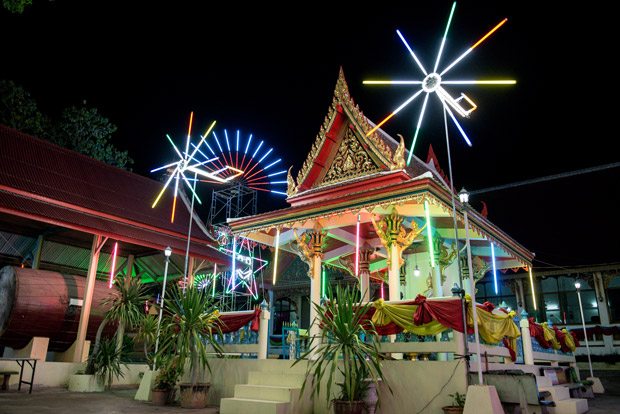 Chaweewan addressed the group, talking about the importance of their art as molam performers, and after this, the group gathered around the central offering to witness the lighting of the first candles and joss sticks, and once this was done, they were sprinkled with lustral water from the presiding molam teacher. Music accompanied various parts of the initial ceremony, and then the group danced gracefully in a ramwong (circle dance) around the offering.

The group was led by a senior monk to circle the temple's main shrine, carrying their crafted offerings. Inside, prayers were led by the abbot. After this, everyone took a break -- the heat was intense by this point -- to conserve some energy for evening performances. The programme of performances was "freestyle", so whoever wanted to sing, took to the stage. There were some lively performances, with younger members of the group showing off their vocal skills.

The molam ceremony was held during the temple's annual fair, so in addition to the molam stage was a bigger one for the more commercial styles of molam, and indeed, it was very lively down at this stage with some serious dancing by music fans and some even more raucous dancing from the chorus line. I don't know who the lighting experts were but they created a technicolour dreamscape with coloured fluorescent tubes that included iridescent palm trees, birds and salas, a helicopter (with moving rotor blades) and smiley faces. The effect was brilliant and certainly one of the best lighting displays I've ever seen at a temple fair, all done by two guys who slept in hammocks in the back of a pickup truck.

Day two of the molam ceremony started with an early morning walk to a sacred shrine located on a hill above the temple. After this National Artist Chaweewan Damnoen addressed the group and the senior molam paid their respects in front of the main alter. Chaweewan then gave a short performance, accompanied by a khaen (the iconic instrument of Lao music, the bamboo reed pipe); she danced gracefully as senior molam Boonchuang Denduang joined her to sing -- it was a really beautiful moment.

All the molam artists paid their respects to the senior teachers, and in turn these seniors then performed a bac sin ritual (tying sacred thread around the wrist of each devotee) for good fortune. The ceremony was completed with the abbot performing choem, the application of a white paste on the forehead of each senior molam (this can also be done for the instrument a molam musician plays), again for good fortune.

And then it was time for some of the experienced molam to take to the stage and perform, led initially by Molam Boonchuang, who was in fine form. Each took their turn to perform and it was a thrill to see and hear so many great performers on stage.

It may seem strange that the annual wai kru ceremony for molam should be in Suphanburi but there are some quite deep Lao roots in the central region that go all the way back to the middle of the 19th century when much of the population of Vientiane were forcibly relocated to Suphanburi, Lopburi and other central region towns following a war between Siam and Lan Xang.

In April, I joined the Molam Bus project at another Suphanburi temple, Wat Ta Pung, which every year holds a Lao-based Songkran ritual that includes walking around two villages with a mobile music unit to bring in the New Year.

That evening I met older villagers, some of whom spoke Lao but had never lived in Isan or Laos; and if you do a little research it turns out that there are several ethnic Lao groups, such as Lao Krang, who have held on to their cultural roots. Did these groups influence local central folk styles like lam tad and pleng i-seo, and did they influence the early singers of pleng luk thung, many of whom came from the Central region, especially Suphanburi? Food for thought.

Many thanks to abbot Dr Suwan Pratchakul for his kind hospitality and to all the molam performers for taking the time to talk about their wonderful music and art.