Home is where the art is
Life
Arts & Entertainment

Home is where the art is

Around an hour's drive west of Bangkok, Ban Pong district in Ratchaburi has been turned into a vibrant art gallery, where visitors can explore the town and take selfies with striking works by more than 40 contemporary artists.

Under the Ban Pong City Contemporary Art Development Project by AT Exchange (Art Terminal Exchange), this two-and-a-half month long event will put the district with the postal zip code 70110 on the map.

This is reflected in the title, "70110: Ban Pong Urban Art Terminal #1/2017", which suggests sequels to the collaboration not only among the artists but the community, who lend the facade of their houses and buildings as canvases for the eye-popping street art.

As a result, local and international artists/designers have showcased their multidisciplinary works such as photographs, paintings, graffiti, installations, live performances and artistic workshops.

The art and culture collaboration aims to establish Ban Pong's contemporary identity while connecting to its past and expressing locals' way of life.

Launched on Saturday, the exhibition at the town's community space will run until July 30. Special activities will be organised every Saturday in different locations such as at a riverside venue near the fire station and a multipurpose open space near Ban Pong district's shrine.

Curators Wasin Paisakhamas and Jatupol Tongdee aka Eyamonsta both hail from Ban Pong. The artists want to make a contribution to their hometown by establishing a dynamic art scene in order to inspire a breed of new local artists. 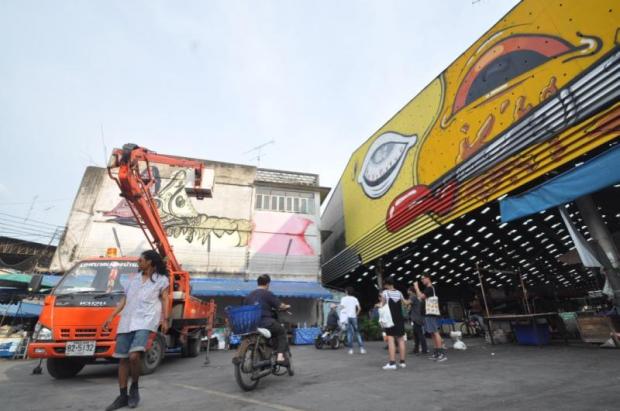