A tribute to Bob Halliday

World Beat is in mourning this week, following the news that journalist and much-loved Bangkok Post columnist Bob Halliday passed away. When World Beat started, way back in March of 1994, I had the good fortune to share a page in the Outlook (now Life) section with Bob's erudite and witty column on classical music. A true renaissance man, Bob always used a funny pseudonym, preferring to work in the background to let his writing on music take centre stage. He was at home writing about his favourite, Bach, or the latest Polish avant garde composer.

Very few music columnists in the region could write on classical music with Bob's acumen and enthusiasm (and the same could be said of his writing on food and cinema), and I have to admit to having come under his influence; I had to work harder to keep up with him. At the same time, we both attended the Red Chairs Saturday-morning meetings at a coffee shop in Amarin Plaza, a venue which attracted a motley, but always interesting, crew of journalists, NGO and aid workers, artists and the simply curious. There, I learned just what a great conversationalist he was -- a man who could talk about many subjects with deep knowledge and biting wit. Enjoying a good conversation is becoming a lost art in these days of electronic communication, so it was a sad day when he stopped going to the Saturday get-together (Red Chairs became quite popular, and Bob didn't like big groups).

It was a sad day when Bob stopped writing his columns, but then he'd entertained us for years and deserved his rest and retirement. He continued to read voraciously and tended his garden. I asked him why he hadn't done, at least, a book on his street-food/restaurant column (note to editors: it's about time you put his fabulous food columns into a book, please), but he was more interested in moving on.

And I'm sure Bob would want me to continue to do what I'm supposed to do -- to write about great music and take photos of fun performances wherever I meet them. This review is for you, Bob.

On May 29, Tang Isan (Isan Way) magazine held a charity molam/luk thung concert, Melody of the Fields at the Tawandang Brewery in Bangkok. The concert featured big stars and singers from the world of molam and pleng luk thung Isan. Attending the concert were many well-known figures in the world of molam. I met legendary producer/composer Surin Paksiri, whose compositions and songs have become part of the repertoire of many lam singers. Indeed, Mr Paksiri was featured onstage at the beginning of the show, and he talked a little about his music.

Then it was on with the show, which was really one of the best combo molam shows I've seen in recent times. It kicked off with some fine dancing and playing by students from the Kalasin School of Dramatic Arts, with all the performers decked out in resplendent costumes.

Khaen master Sombat Simlar then gave a short solo performance that included his incredible "train journey" (every bit as enthralling as James Cotton's famous blues-harp "train" songs), with refrains of gai yang (fried chicken) and a thrilling rendition of the Thai National Anthem. From the middle of the floor he was joined on stage by rising molam star Om Em. 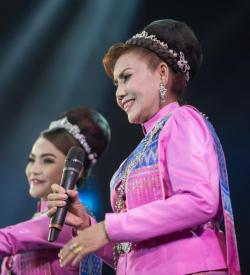 The next act was led by molam Aungkanang Khunchai and her daughter Nong Ploy, who went through some of her big hits from the 1970s, all written by Surin Paksiri, including the luk thung Isan classic Isan Lam Ploen. Aungkanang told me that she now performs with her daughter as a duo. Next up was the superstar Mr Et of Bonglang Sa-on and his wacky crew, led by a fabulous hang kruang (chorus line). Et did a comedy skit with a singer which involved the audience shouting out a province, which Et and his singer would quickly turn into a well-known song from the province selected, or they would make up some lyrics on the spot about the province. It was brilliantly funny and showed just how good molam singers are at thinking on their feet.

Bonglang Sa-on left the stage for veteran singer Saleh Kunawut to croon to the massed group of female fans at the stage front; I had never seen him perform, but he was very good indeed.

The crowd in front of the stage swelled enormously for one of the big stars of the show, Tai Oratai, whose set involved multiple costume changes and some neat dance moves. Gracious as ever, Tai's set was enthusiastically received by her fans. Last up was another singer I had not seen before, Monkaen Kaenkoon. My molam friends told me earlier that he is a fast-rising star with a great voice. And they were right: I can see him rivalling big luk thung Isan stars like Mike Piromporn.

This was a fabulous night, full of great music, side-splitting comedy and some great dance moves. The focus was on Kalasin province (home to some great bonglang performers), and money was raised for charity. Tang Isan is to be congratulated for putting on a great show. Do try to catch any of these great artists when you see their shows advertised -- you won't be disappointed. 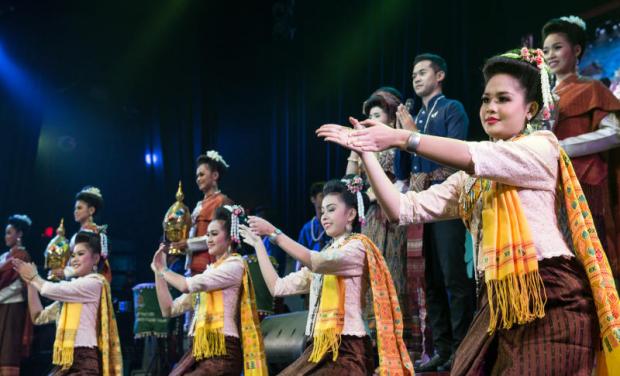 A performance by students from the Kalasin School of Dramatic Arts. John Clewley