Pasuk Phongpaichit and Chris Baker have been writing about contemporary and historical Thailand for nearly 30 years. Life spoke to the couple − recent recipients of the prestigious Fukuoka Grand Prize − about their past and present work

published : 19 Jun 2017 at 04:30
newspaper section: Life
writer: Kong Rithdee
Chris Baker and Pasuk Phongpaichit at their home, with their new book A History Of Ayutthaya.

Pasuk Phongpaichit's and Chris Baker's house is a verdant abode at the end of a maze in an Ekamai sub-soi. The garden at the back has tall trees and a small, tea-coloured pond. The whole area used to be a swamp, said Baker. The couple, both highly respected scholars in Thai studies, have been living there since 1987, or in their lexicon, "just before the boom" -- the high-flying economic expansion whose seismic shifts forever transformed Thailand in the early 1990s. Had they wanted to purchase the plot slightly later than they actually did -- after the boom had set in -- they wouldn't have been able to. "We came just before the high-rises."

Thailand's Boom and later, Thailand's Boom And Bust: they are just two among the many books co-written by Pasuk and Baker, the mid-1990s works that remain in print and that capture their lifelong pursuits to explore the relationships between economy, politics and Thai history as a perpetual work in progress. Last week, the two Cambridge-educated scholars were named recipients of the Fukuoka Grand Prize, arguably the most esteemed honour given to scholastic achievements in Asian studies. It's only the second time in nearly 30 years that Thailand-based academics have been awarded the Grand Prize; the first was MC Subhadradis Diskul in 1990. It is also unprecedented that the prize has been awarded to two laureates.

"Two people working together is much faster," Baker said with a laugh. "The advantage of having two people is the in-house seminar, which is permanent."

"We constantly talk and argue," added Pasuk. "We bounce things around before anything goes down on paper. In the end, it doesn't matter who actually puts it down, though of course Chris [handles most of the English writing]."

The community of Asian scholars hails the Fukuoka honour as most deserving. Pasuk, a professor in economics, and Baker, a historian and former ad agency writer, have hit on the heavy subjects in their research for nearly 30 years, and their books -- several of them translated into Thai and enjoying a spot on the best-selling shelf -- show a rich symbiosis of their two branches of expertise.

To name a few, Thailand's Boom And Bust (1996, revised in 1998); Thailand's Crisis (2001), a comprehensive survey of the IMF years following the 1997 crash; Thaksin: The Business Of Politics In Thailand (2005), written as the politician accumulated power and controversy; A History Of Thailand (2005), an attempt to recast the influences of the poor and the Chinese merchants in Thai history; and Unequal Thailand: Aspects Of Income, Wealth And Power (2015), a subject that has become the epicentre of Thailand's socio-economic discussion.

In short, they delve into the grand themes that define and confound our own understanding of this country -- the themes that arch over our lives like a storm cloud and continue to shape and shift our daily struggles, economically, politically and historically.

"The international interest in Thailand is about understanding the whole picture," said Pasuk, whose earlier work Guns, Girls, Gambling, Ganja (1998) is also seminal in its study of the underground economy. "I hope this is our contribution to understand Thailand."

Pasuk and Baker, now in their 60s, met while they were students at Cambridge and got married there in 1979. When they returned to Thailand, Pasuk started teaching at Chulalongkorn University, where she still lectures today. Baker, meanwhile, found it difficult as a foreigner to find an academic job in Thailand back in those days. He got a job at a small research firm, then at the advertising agency Lintas, and later at a company that distributed Johnny Walker. In the meantime, he collaborated with his wife on the books and research. When the bubble burst and he lost his job at the 1997 financial crash -- the subject of one of his books in fact -- he decided to become a full-time writer.

"At that point Pasuk was very famous, she was invited to speak everywhere," Baker said. "So I got a new job as her bag carrier!"

Jokes aside, the stint with the ad agency, Baker said, taught him everything about communication -- the quality that would set him apart from familiar quibbles about joyless, impenetrable academic writing. Though many of Baker's and Pasuk's books are still considered textbooks by many (and one or two reviews in Goodreads still complain about the dryness of A History Of Thailand), their prose is accessible, and the tone is hardly professorial.

"I'm very keen on readability," Baker said. "In fact, Thailand Boom And Bust was written as if by a copywriter. It's all 13-word sentences."

Unequal Thailand, for instance, is a report on tough subjects, and yet its status as a months-long bestseller at a leading Bangkok bookstore speaks of its timeliness and accessibility. Inequality, Pasuk said, remains the most worrying problem Thailand is facing, even though she and others have been writing about it since the Boom And Bust book. The system has been so skewed, she said, and at one point in the 1990s Thailand fared just better than African counties. Over the past decades, it has got slightly better, though is still dismal compared to other countries in the region.

"It's the most important issue because it has implications on politics, and the way so many institutions make things unequal in this country, particularly when people are used to being in a position of privilege for a long period and find themselves unable to maintain it," Pasuk said. "Inequality has been institutionalised."

"The red and yellow thing," Baker added, "is obviously about inequality."

Thailand is more than just its fevered politics, however, and the book that the couple are most proud of is the one that reflects their wide cultural interests: the 1,430-page English translation of the Siamese folklore epic The Tale Of Khun Chang Khun Phaen (2012), a feat of linguistic endeavour and historical treasure-hunting.

It took Baker and Pasuk seven years of translating, researching, picking the brains of archaeologists and historians, poring over different manuscripts, popular and unabridged, vintage and recent, and even retracing the journeys undertaken by the characters of the 17th century story that has been told, retold, augmented and colourised by raconteurs and scribes over the centuries. In an interview with the Bangkok Post in 2012, Baker suggested that the popularity of Khun Chang Khun Phaen -- a picaresque adventure full of war, sorcery and sex -- could be compared to that of Star Wars, in which sequels and prequels kept being grafted into the source.

"I was just interested in it as a work. I wanted to read it -- so why not translate it?" said Baker, who speaks and reads Thai fluently. "Pasuk first did the [Thai to English] translation. Once I understood how the klon [verses] work, I started doing it. Then Pasuk would read the Thai verses and we checked it out."

The hard part about that particular book is the sheer amount of archaic vocabulary that required a work of semantic archaeology, from decrypting Mon scatology to being sent the wrong way when they thought the Chinese words in the story were Taechew when in fact they were Hokkien.

"It also has lots of references to old things which have long disappeared," Pasuk said. "It's sort of a paper chase," Baker added. "I had fun doing it."

Recently, the two also translated Yuan Phai, The Defeat Of Lanna, one of the earliest works of Siamese literature dating back to 1475, 1,000-plus lines of martial epic written in esoteric verses (building upon a glossary compiled by Winai Pongsripian). Baker also translated Ayutthaya's Palace Law -- kot monthien barn -- again a set of ancient code written in ancient syntax.

The couple's latest book -- and also one Baker is proud of -- is due for release next month: A History Of Ayutthaya, arguably the first comprehensive study of the 400-year span of the kingdom. Ayutthaya, Baker argues in the book, was part of "the Asian story" -- it was "one of the great powers of Asia alongside China and India", and certainly not a disappointing period that paled in comparison to the glorious Sukhothai (he built the argument upon earlier theses by scholars such as Charnvit Kasetsiri). The reason there are so few studies of the kingdom in English, he said, is because the postcolonial scholarship that began after World War II in the West only focused on the former colonies and left out Ayutthaya.

The Grand Prize given by Fukuoka is an honour to the couple's entire scholarly career. It's worth noting, however, that while their earlier works dealt head-on with contemporary Thailand and its web of structural influences -- politics, economics, poverty, wealth, corruption -- their later woks seem to focus on revisiting history and translations of ancient literature.

At a time when Thailand of the mid-2010s is going through a peculiar motion where the confluence of so many impulses, uncertainties and internal struggles require clarity of mind to pick it apart, Pasuk and Baker, who did that so brilliantly in the 1990s and 2000s, said they have no wish to discuss present-day Thailand. Not now at least.

"It's partly our conscious decision [not to do a book on contemporary Thailand]," said Baker. "[Despite everything] it's a less interesting moment for us simply because you can't say what you want to say. It's unpleasant and difficult."

"In my training," Pasuk added, "I used to be able to say what I think or what I have observed, and I would never feel threatened. There's always something in the constitution that says you're pursuing this or that research for the good of society. Now I don't have that feeling. When I did Guns, Girls, Gambling, Ganja in the 1990s, one of my team members was charged by 22 police stations for defamation, [but we could sort it out]. But I began to see that there's no protection now, and I don't want to go through that again."

Throughout the conversation, the way Pasuk and Baker echo each other's thoughts can be startling, in general and especially on this issue.

"Academics outside Thailand are very important because they have more space," Baker said. "For those who're here, there's a responsibility to continually test the water. But the first duty is to yourself, that is to stay safe."

Now the couple are preparing their public lecture to be given at the award ceremony in Fukuoka in September.

"We're the first couple to get the prize together," said Baker. "We've made something out of our differences -- female and male, Thai and farang, East and West, economics and history.

"The lecture we'll give [in Fukuoka] will be on the theme of love, from passion in old Thai poetry to political co-operation today." 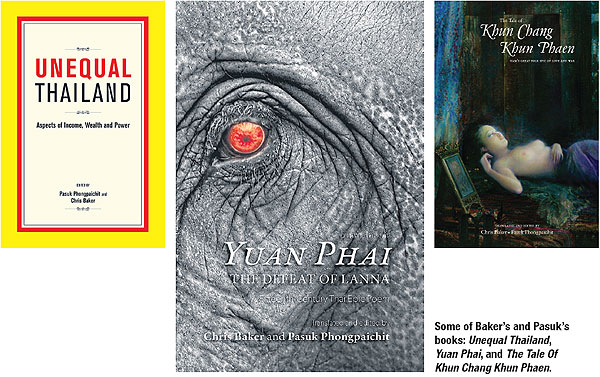