Sisters are doin' it for themselves
Life
Arts & Entertainment

Sisters are doin' it for themselves

With 29 members, the girls of BNK48 hope to follow the huge success of their Japanese counterparts AKB48

Call it teen power. Or the epitome of kawaii culture. Or a great marketing idea. Some may also detect a strange, Lolita-tinted vibe. But with their own TV, anime and manga series, as well as the record for "highest selling musical act in Japan in terms of singles sold", AKB48, with 48 members, are a long-standing Japanese idol girl-group known for their super-cute style and catchy tunes. It has been described as a national phenomenon in its country of origin, with a devoted fanbase that has followed the band's songs and merchandise since its inception over a decade ago in 2005.

Last year, to the jubilation of its Asian fans, the band announced the imminent debut of three new "sister bands" based in other Asian countries, with the first to debut earlier this year being BNK48, the Thailand-based offshoot of the popular girl group (the other two are the Philippines' MNL48 and Taipei's TPE48). The band, which maintains the original format of having a huge membership, now has 29 mostly teenage girls who always show up in unison, dressed either in frilly fantasy costumes or white T-shirts and jeans shorts. They sing songs, but their appearance usually brings out a horde of (mostly male) fans to admire their cuteness and snap photos.

BNK48 has garnered a devoted and sizeable fanbase in the months since their debut in February, thanks to their daily live-stream shows as well as their own BNK48 Senpai TV show, which follows the 29 members, the youngest 13 and the oldest 23, on their rehearsals and practices.

They have also released three singles so far, all of which are adapted into Thai verses from the original Japanese songs sung by AKB48.

"I'm very much as flattered by all the attention and support today as I was when we first made our debut," said 16-year-old Praewa Suthampong, better known to her fans as "Music" of BNK48, who -- along with her bandmate Jennis Oprasert -- recently spoke to Life about their experiences as members of the idol group.

"Most of us never expected so many people to be so interested in us, as we're practically just normal children with no real achievements yet," added Jennis. "We are all totally humbled that so many people would be so supportive of us so soon."

According to the girls, both of whom are avid fans of the Japanese AKB48, the appeal of idol groups like BNK48 lies in the close relationship between the fans and the idols, which gives fans the opportunity to observe the growth and improvement of their favourite idols, an experience that can't really be found in typical girl-groups.

"With AKB48, you get to follow each idol from the start of their career and see how they change and grow as idols over the years. Some of them start out as normal, unremarkable girls, and grow to become beautiful, talented women as the years go by. You can't help but feel proud of their achievements," said Music. 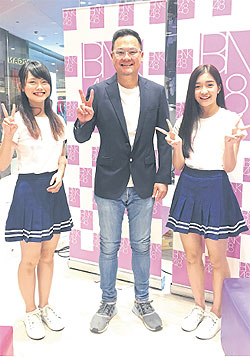 Created with the same "idols you can meet" concept as the Japanese original, BNK48 regularly interact with their fans through social media, where the band regularly appears in live-stream shows as well as their own individual Facebook fan pages.

"For me personally, the most appealing aspect of BNK48 isn't the members' attractiveness or even necessarily their talents, but their personalities instead," said video game-company founder Parimeth Wongsatayanon, an avid follower of the Thai band.

"Viewers can pretty much follow each idol's daily life through Instagram or live-streams, which for me makes them that much more relatable. It's like watching a reality TV show that actually follows the contestants' daily lives as opposed to a scripted event."

Jirat Bawornwatana, executive chairman of BNK48 Office, the company established specifically to handle the band by parent company Rose Artist Management, explained that the accessibility between the idols and their fans are part of the band's main appeal. They don't just want BNK48 to be loved for their songs, but also for their true personalities and attitudes.

"We want our fans to see and appreciate the hard work our idols put into their performances and songs. We want them to fall in love with our idols based on who they are, not just their appearance."

To non-fans, the sheer size of the group can be confounding, even intimidating, and their doll-like characters, crafted specially to service the fans, may not prove a hit with feminists. Some observers feel weirded out by what they perceive to be a close relationship between the fans -- a lot of whom are grown adult men -- and the idols, most of whom are still in middle or high school.

"I always feel strange when I think about the Digital Studio [the band's headquarters], and the fact that there are a bunch of grown men standing around watching a group of young girls in what is essentially a fish tank where you can stare at them," said Phavin, an employee at Don Mueang airport who saw the group on TV.

"There's certainly nothing really wrong with it, especially since the girls are doing it willingly as part of their job, but it's still an unusual image."