The Chiang Mai National Museum has a new face after four years of renovation. Reopened on June 14, it brings exhibitions to life using state-of-the-art technology and presentations, and hopes to attract younger visitors. 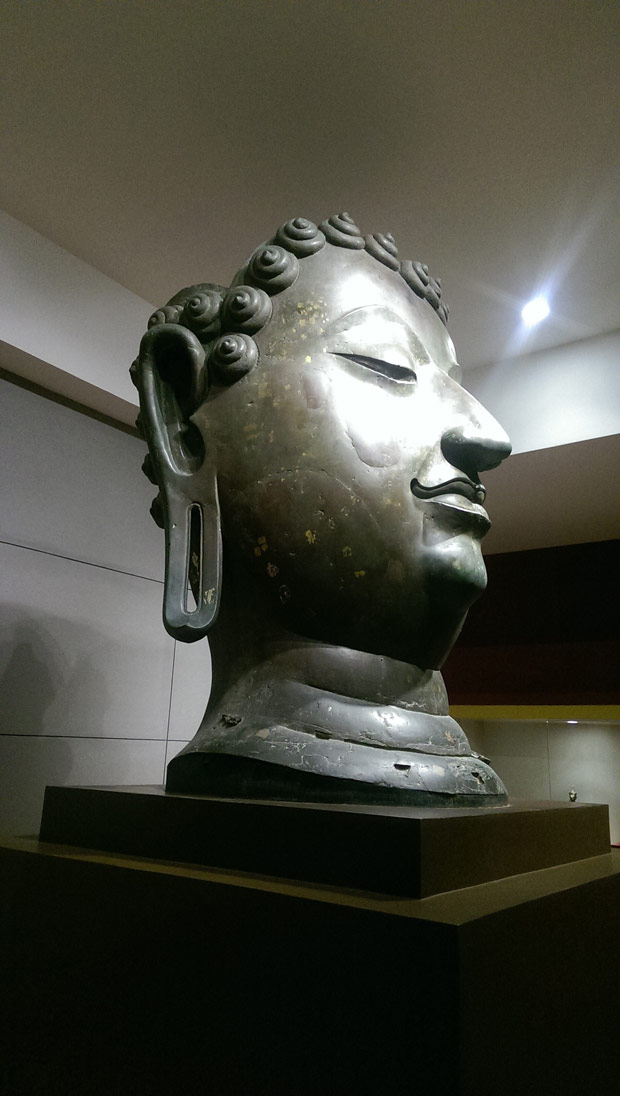 Phra Saen Swae is a 1.82m-high bronze Buddha image found at Wat Yangkuang, a deserted temple near Chiang Mai Gate in Muang district. If intact, the entire Buddha statue would be 6m tall and could be considered the largest bronze Buddha image found in the Lanna Kingdom. In terms of art, Phra Saen Swae is in the same group as the Lanna-styled Phra Singha type, which has a larger hair knot, rounder eyes and is seated on an upturned and upside-down lotus base. During the reign of King Chulalongkorn (Rama V), the head was relocated from the temple to the Marble Temple in Bangkok as Prince Damrong Rajanuphap, the Father of Thai History, tried to gather all major Buddha images from across Siam. However, the head was too large to be brought into the pavilion surrounding the ubosot (ordination hall), so it was placed at the front entrance instead. From 1926-1972, the head was displayed at the National Museum Bangkok. Later in 1972, the head was brought back to the Chiang Mai National Museum. 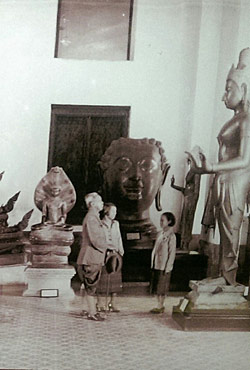 "From 1996 to 1999, the Chiang Mai National Museum was being renovated and extended, and the permanent exhibition was improved to cover various fields of geography, geology, prehistoric archaeology, history, ethnicity and Lanna art using diverse techniques and multimedia. Later in 2013-2016, the Fine Arts Department overhauled the permanent exhibition by giving importance to the beauty of artefacts and art objects through better lighting, updating academic information, and using modern information technology for guidance. Now, the renovation is completed," said Fine Arts Department director-general Anandha Chuchoti.

Nestled on 23 rai in Muang district, the museum was established in 1969 with the objective to showcase antiques and artefacts from the North. It is one of the seven national museums opened by the late King Bhumibol Adulyadej. Officially opened on Feb 6, 1973, the museum has served as a centre for students and the public to learn about Thai cultural heritage. Objects on view in the permanent exhibition tell stories of the North and the development of its unique art styles.

Display, design and lighting of the permanent exhibition have been modernised and information on the panels and signs updated. The latest research and archaeological findings, QR and AR codes, 3D imaging, a "virtual museum" and diorama systems have also been applied.

Chattaralada Sinthusara, director of the Chiang Mai National Museum, said: "The museum gathers collections from eight northern provinces and gives the overall perspective of this region by highlighting Chiang Mai. Apart from information panels, the QR codes contain information which may not be presented during guided tours, such as dimensions and details of objects. Touchscreens were added to allow young viewers to experience archaeological excavations. These technologies allow us to communicate with a wider audience."

The new permanent exhibition comprises 16 rooms -- eight on the ground floor and eight on the upper floor. The 16 rooms are Development of Buddha Images of Lanna, Phra Saen Swae, Lanna Votive Tablets, Buddhist Ceremonial Utensils in Lanna, Archaeological Objects Found in Hot District, Chiang Mai, Lanna Ceramics, Lanna Paintings and Arts in Thailand, Prehistory in Northern Thailand, History in Northern Thailand, Lanna Kingdom, Lanna under Burmese Rule, Lanna during the Rattanakosin Period, The Relationship between Chiang Mai and the Court of Siam, Buddhism in the Lanna Kingdom and Buddhist Beliefs.

If you want to explore Lanna history, art and architecture chronologically, you should start on the upper floor. However, if you want to focus on highlights, you can visit the ground floor.

The upper floor portrays human settlement in prehistoric times, archaeological discoveries at more than 100 sites in the North and Lanna's historic period ranging from the Hariphunchai Empire in the 11th-13th century to Chiang Mai as a province in 1933.

The museum director recommends viewing a vast collection of Chinese pottery found at Wat Nan Chang (in Chiang Mai's Wiang Kum Kam Ancient City Site) because it is in perfect condition after having been preserved well and left untouched when local people had to flee flooding. It is evidence of contacts with China and other communities.

According to former Fine Arts Department director-general Anek Sihamat, who oversaw the renovation project when it took shape when he was deputy director-general in 2013 and when he became the department head in 2014, the Chiang Mai National Museum has outstanding things on the ground floor, which portrays the glory of Buddhist art from Hariphunchai, Pala of India, Bagan of Myanmar and Sukhothai-influenced art.

"The masterpiece is the head of a bronze Buddha image called Phra Saen Swae, showing a sophisticated metal moulding technique. If in a complete condition, Phra Saen Swae would have been huge and reminded us of major Buddha statues like Phra Buddha Shinnarat [in Phitsanulok] and Phra Sri Sakkayamunee [at Wat Suthas in Bangkok]," he noted.

To him, other interesting things are Buddhist ceremonial objects and pottery from ancient kilns, which reflect religious and commercial contacts with the outside world such as India, Sri Lanka and Bagan, Myanmar. "Chiang Mai is unique in terms of art and architecture."

"The aim [of the new version of the museum] is to show connectivity of historic sites. We encourage visitors to start with visiting Wiang Kum Kam [an ancient city before Chiang Mai], then the Chiang Mai National Museum, Phra That Doi Suthep and other places in order to learn about the overall picture of the Lanna Kingdom," Anek added.

- On the Chiang Mai-Lamphang Super Highway in Chang Phuak, the Chiang Mai National Museum is open from Wednesday-Sunday, 9am-4pm.

The Hariphunchai Empire of the 11th-13th centuries was the centre of Theravada Buddhism on the Chiang Mai-Lamphun plain until Phaya Mangrai, the king of Hirunnakhon-ngoenyang on the Chiang Rai-Chiang Saen basin, successfully extended his power merging both and establishing Nopburi Sri Nakhon Phing, or Wiang Phing, as the capital city of the Lanna empire. The empire had 18 monarchs from 1296-1558. After more than two centuries under Burmese rule, Chiang Mai bettered ties with Siam and became a vassal state of Siam, but its nine kings under Siamese rule still had the freedom and power to govern their kingdom until the 1932 Revolution that changed Siam’s absolute monarchy to constitutional monarchy. In 1933 Chiang Mai became a province of Siam. 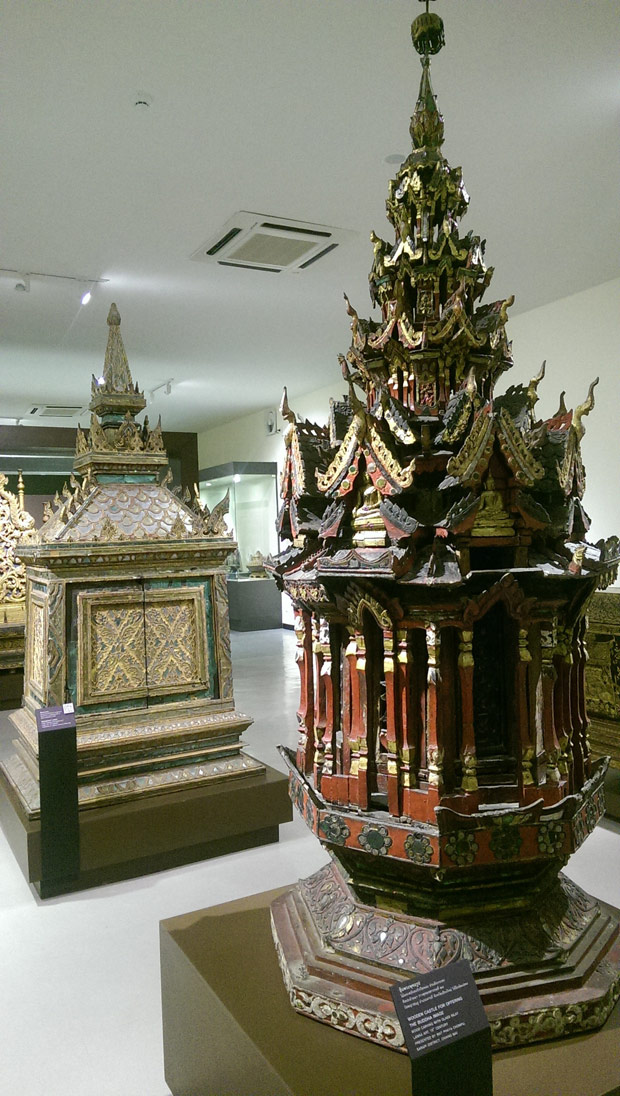 These wooden Buddhist ceremonial objects date back to the 19th-20th centuries. They are used in paying homage to the Triple Gem of Buddhism, the Lord Buddha, dhamma and Buddhist monks. On view are Buddhist Canon chests, candle holders, models of vihara (praying halls) and models of prasat (multi-storey buildings with multi-tiered roofs for storing Buddha images). A nearby section shows models of Buddhist objects of worship found in Hot district. 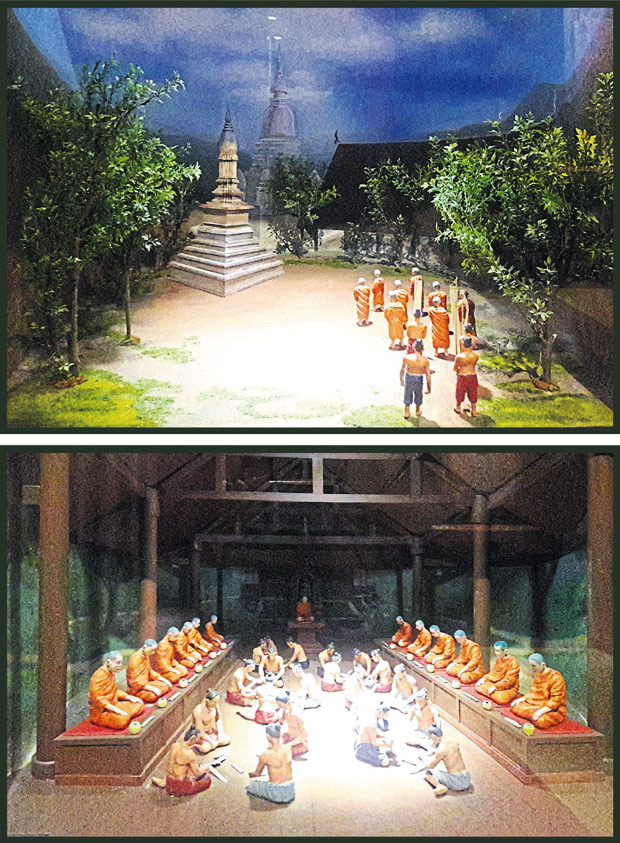 Buddhism in the Lanna Kingdom is displayed through dioramas, which depict Sumanathera, a Sukhothai monk, bringing the Buddha’s relics to Wat Buppharam (Wat Suan Dok) in Chiang Mai. The other diorama portrays the world’s eighth revision of Tripitaka (the Buddhist Canon) at Wat Maha Photaram (Wat Chet Yot) in Chiang Mai, in 1477. 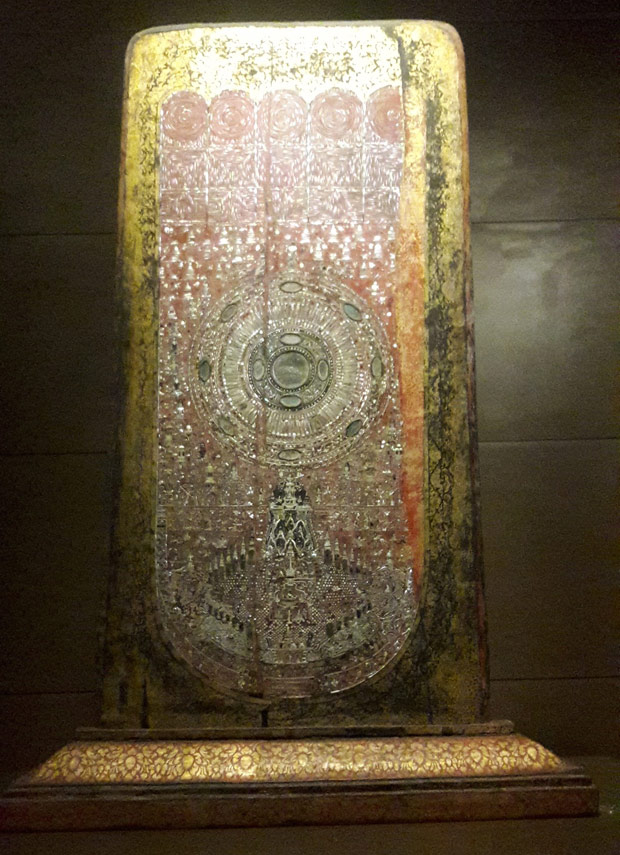 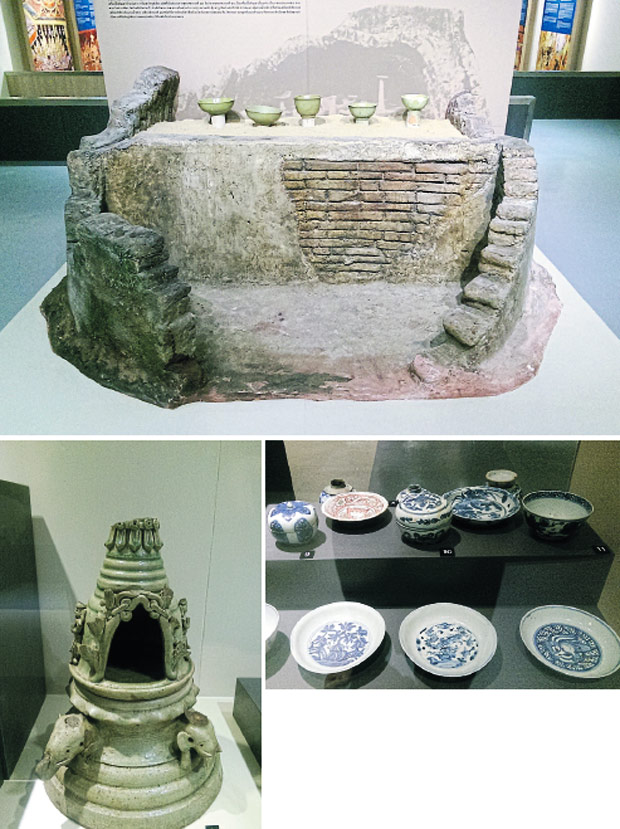 Pottery from numerous kilns in the North and foreign lands, such as Lanna and Sukhothai, China and Vietnam are displayed. Lanna ceramics from the San Kamphaeng Kiln, San Sai Kiln and Wiang Tha Kan Kiln in Chiang Mai, Ban Wang Hai Kiln in Lamphun, Wang Nua Kiln in Lampang, Wiang Kalong Kiln and Phan Kiln in Chiang Rai, Phayao Kiln in Phayao and Ban Bo Suak Kiln in Nan are on show. 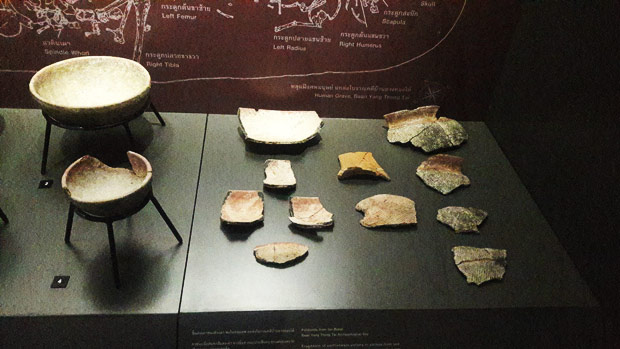 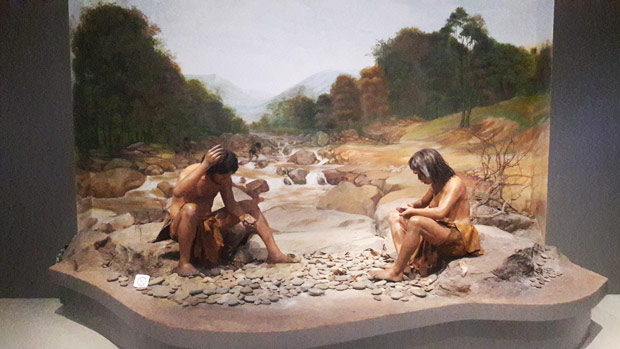 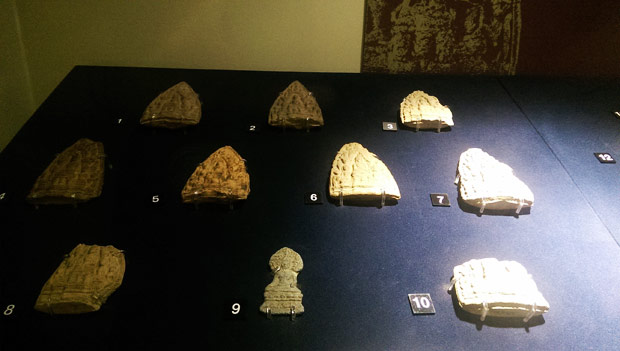 Buddhist votive tablets are symbolic objects representing the Buddha. They are usually small and in the shape of Buddha statues or Bodhisattvas. Buddhist votive tablets of the Lanna era are either in the Indian, Dvaravati, Bagan, Khmer-influenced Lop Buri or Hariphunchai art style. The famous Hariphunchai type consists of Phra Phim Prok Bodhi (Buddha seated under the bodhi tree) and Phra Phim Roop Samliam (triangular-shaped votive tablets). A nearby section showcases Lanna-era Buddha statues. After founding Chiang Mai in 1296, Phaya Mangrai adopted the practices of Buddhism of the earlier Harinphunchai period. Buddha images in the Lanna style developed over time. For example, Lanna’s Buddha images of the 13th century were influenced by Hariphunchai art style, which mixes certain features of India’s Pala art, Myanmar’s Bagan art and a hint of Sukhothai art. These images have a round face, slightly open mouth, large hair knots and wear a robe which ends over the breast and is in the shape of a centipede’s fangs. 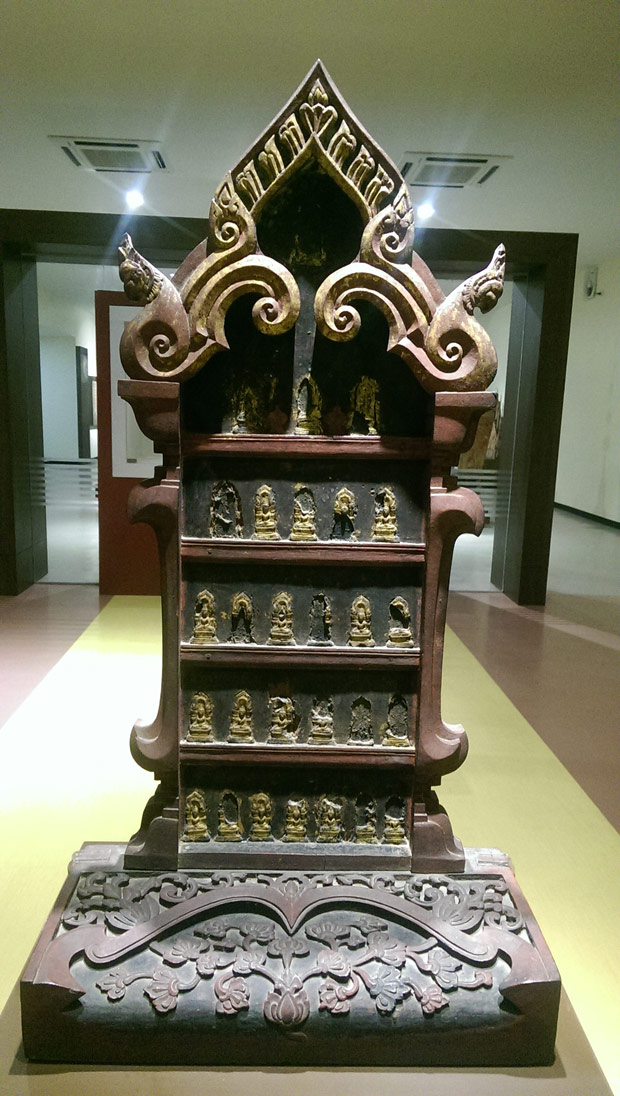 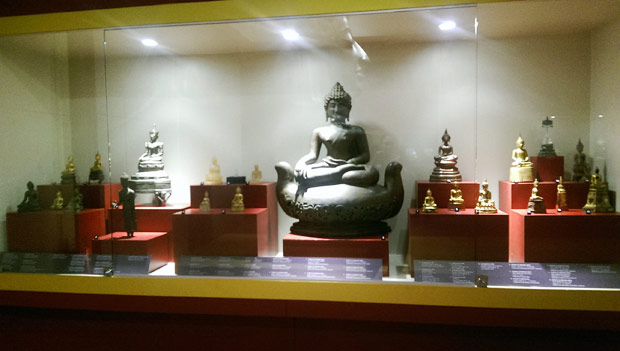 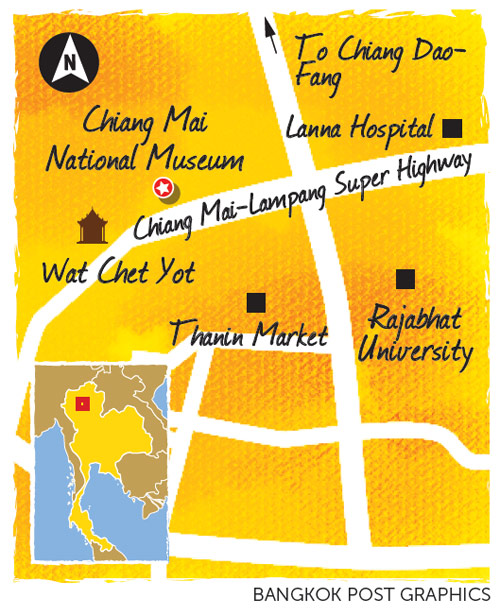