The woes of the yes man
Life
Arts & Entertainment

The woes of the yes man

Parinot Kunakornwong's exhibition "Yes" isn't meant to evoke a happy, enthusiastic affirmative -- but rather the resigned, yielding acceptance of the powers that be and of our unnatural order of things.

"Sometimes you say yes because you cannot say no," the London-based artist explains at Cartel Artspace on Narathiwas 22, where his mixed-media artworks -- comprised of photographs, video and sound installations, and a mural painting -- are on display until the end of the month.

Far from being a fatalist, Parinot teases and challenges established norms with subtle irony, often by toying with dimensions and bringing opposites together.

Curated by Loredana Paracciani, the show seems in fact to be composed of two rather distinct chapters, held together only by the artist's ability to poke at us, making us question our conceptions.

By inviting visitors to enter the gallery and view -- as well as experience -- dust, Parinot encourages us to look at our contradictions, at the "insignificant".

And it's literally hanging on the walls -- microscope images of dust particles, blown out of proportion. Objects and values worthy of our attention and time are only constructs and manipulations. With the infinitely small and the organic, Parinot recreates what is artificial and bigger than life.

"That's the effect the billboard has," he adds. "Shoes aren't shoes anymore -- their status has changed."

Ironically, he recalls that for the dust particles to be photographed, they had to be coated with gold.

As trivial as dust may seem, it's a marker of temporality, as symbolised in the artist's video installation. The tidal movement with which he sweeps the gallery floor prior to the show's opening -- as captured in slow-motion on camera -- evokes cycles of history and memories being brought up again periodically.

This idea seems to have been in Parinot's mind for quite some time already. 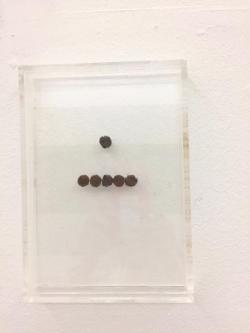 Samples of dirt, coated with gold, that were used to shoot images of the dust particles. Parinot Kunakornwong/Cartel Artspace

For his last solo exhibition at Tars Gallery, the artist breathed out -- then put on show -- the dust he had inhaled during a visit at the British Museum. "I wanted to create an object that combined the whole history of the world. But it ended up being more of a trace," he said.

In his last exhibition, which took place in April 2016, he focused on the personal, using his body as an interface. A year later, he steps out and further. "Dust is universal. There's something democratic about it," he added. "Rich or poor, we all breathe dust, and eventually turn to it."

In some ways, the installation is to be interactive, as Parinot intends not to clean the art space for the whole duration of his exhibition, so that dust accumulates over the course of visits.

On the other side of the room, cries of "Yes" resonate from a device. Parinot used a sound generator to spell out the word -- "because I liked the idea of making the machine say whatever I wanted".

Interestingly, the first letter "Y" turns into a "Why" at a time when asking questions -- or rather demanding answers -- is not the safest option.

The sound installation echoes the smudge on the wall, the affirmative word hand-painted with shoe polish -- like thumbing one's nose at those in positions of authority who like their leather shoes and belts shiny.

The material, used as a symbol of subordination and subservience, brings us back to Parinot's initial question: do we consent freely in this time and place?

Remember when, two months ago, an artist agreed to remove his installation from those exact same walls.

Just like shoe polish is considered clean when used on shoes, and dirty when smeared elsewhere, many things in Thailand go the same way: acceptable only under certain conditions. 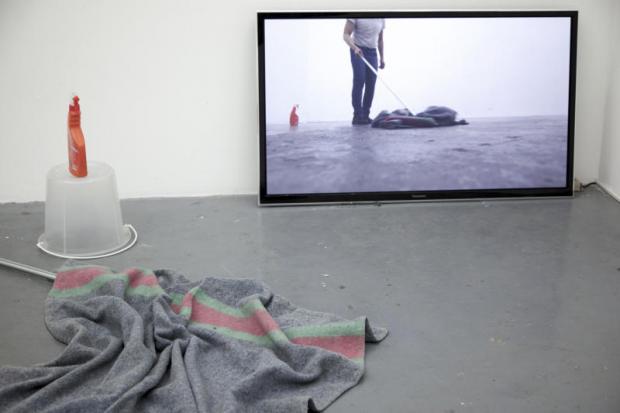