For his latest horror film, Sophon 'Jim' Sakdaphisit ventures to the top of Sathon's Ghost Tower

Director Sophon "Jim" Sakdaphisit likes to create his horror films based on locations. His 2008 directorial debut, Coming Soon, is set in a haunted cinema. The follow-up smash hit Laddaland -- his best-known project, which grossed 117 million baht in Thailand -- is set in a housing estate. And The Swimmers (2014) takes place mostly around a swimming pool.

"I guess I'm not really into possessed dolls," joked Sophon in a phone interview. "So I'm opting for places instead."

Sophon has made nothing but horror movies since he was a film student, and this week he returns with his fourth feature, Puen Thee Raleuk (The Promise), which sees the director taking his cast and crew on a trek up 47 floors of Sathorn Unique Tower, an unfinished carcases of a skyscraper that now serves as one of the capital's memorabilia of the 1997 financial crisis. The building was originally planned as a luxury condominium, until its construction was put on hold after the real estate market collapsed.

To this day, 20 years after the financial crisis, the building remains half-ruined and abandoned amid the now-flourishing Sathon business district. Its creepy air has drawn daring trespassers up the flights of what is known -- informally and infamously -- as Bangkok's Ghost Tower.

Film studio GDH, producers of Sophon's film, became the first company to get permission to film on location at Sathorn Unique, which has neither water nor electricity. A small freight lift was installed to transport cameras and other equipment during filming, but the cast and crew had to walk the 40-plus storeys themselves.

"It's a piece of desolated architecture left smack right in the civilised world," said Sophon of his film's location. "Before we went up there for the first time, we only saw pictures that people [had taken surreptitiously] indicating that it has a marvellous view of the sunset over the Chao Phraya River.

"But when we actually went up there ourselves, and we stayed until the middle of the night, we really didn't know whether to be in awe of its beauty or to be scared. The floor plan is pretty dated. It comes with a huge balcony which now has a small meadow, mosses and puddles growing on the 40th floor. It is indeed scary, but also very beautiful."

The Promise begins with the story of teenage best friends, Boom and Ib, whose families are affected by the fall in the economy. Unable to cope with the sudden change and the stresses that come with their fathers' bankruptcy, the two adolescents vow to commit suicide together at their fathers' building, the Ghost Tower. Ib is the only one who dies.

Part of the film is set in the late 1990s, which brings quite a challenge for Sophon's team to capture the emotional breakdown and the effects of the financial collapse that still resonate in the memory of thriving souls. Part of the fun is to recreate the lives of Bangkokians 20 years ago for today's teens to understand, and for adults to think back to the good (and bad) times of that era.

"The past and present became a contrast of imagery, not of just ageing characters, but also of shifting technology from analogue to digital. It was interesting to show kids what they haven't seen before, or something that existed only in pictures to them. They have no idea how much it used to matter to people back in the day.

"We gave a pager to Linly, who is 15 years old. She had no idea what it is," laughed Sophon.

After making three horror films, it can be a challenge to offer something fresh for the audience, something that doesn't feel tired and repetitive. But as someone so fond of horror, Sophon has always made it his mission to try new things.

"Personally, I won't start a film until I can find what sets it apart from my previous works. So, in each new project, it's about telling a story I have in mind, in a way that it feels new and different from the previous ones," explained Sophon 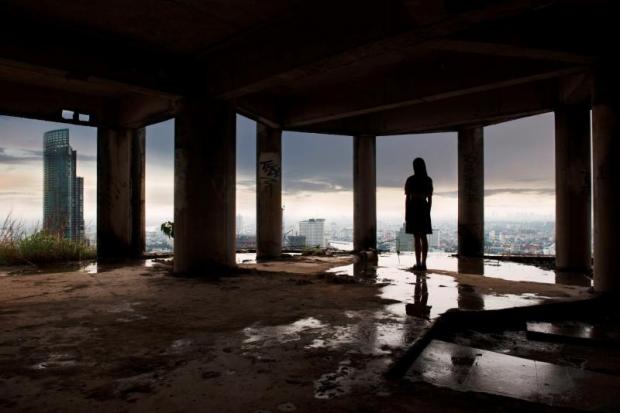 "With The Promise, our team didn't approach it from the thought that we wanted to make a ghost film. We began from the lives of people in 1997, when they faced death, changes and rebirth, then took it to how they feel now, when they are faced with the consequences of the past. Once we nailed that, we began to think how we were going to make it scary."

The Promise also provided Sophon a chance to collaborate with veteran television queen Namthip. He said that the actress' role as a mentor on the model-seeking TV show The Face Thailand drew the producers to her from the start.

"She's a fighter -- both herself and the character. She also has the right age. The character of Boom was actually written based on Namthip herself," said Sophon.

The film also marks Namthip's first feature film -- she's only acted in lakorn before. While Sophon said he never had to worry about the actress' skills, but they needed some time to tune in to one another, adjusting the acting to suit big screen.

"We talked a lot with one another from the beginning, and she would tell me, 'If it's not good, just let me know and I'll fix it. Don't worry that it will offend me or anything'. When an actress can be that open, working together becomes very easy."

"She [Apichaya] is very young. Her acting may not be perfect. But she is very natural, which makes her stand out even when compared to those who can act better," he commented.

"The role requires a girl who is in the midst of problems, so we were looking for someone whose innocence people would feel protective of. This innocence is not something you can act out -- it has to be from within. And when we took into consideration her great chemistry with Namthip, we realised she was the one."