A new film explores a tragedy that led to the events of Oct 6, 1976

On Sept 24, 1976, two electricians were beaten and hanged to death from the top of a gate somewhere in Nakhon Pathom, victims of an escalating right-wing terror in Thai politics of that heady decade. Two weeks later, as protests against the return to the Kingdom of former dictator Gen Thanom Kittikajorn gathered steam, students at Thammasat University staged a play about the hanging of the two men. Soon the photographs of the play were used by nationalists to whip up anger and fear of communism, which led to the massacre on the morning of Oct 6 as police and militias laid siege to the university, killing, maiming and brutalising scores of people in one of the worst incidents of bloodshed in modern Thai history.

As the memory of Oct 6, 1976, returns for another year, a new documentary revisits the case of two electricians, regarded as a major contributor to the bloody climax. The short film, The Two Brothers, is part of an ongoing project called "Documentation Of Oct 6", in which scholars seek to collect documents, photographs and testimonials of the incident relating to that horrific morning, the details of which remain incomplete.

In news and stories about Oct 6, the two electricians are often cited as key characters preceding the massacre. It's out of respect and historical significance, said Patporn Phoothong, one of the directors of the documentary, to make sure that their names, Choomporn Thummai and Vichai Kasripongsa, are mentioned and stories told. 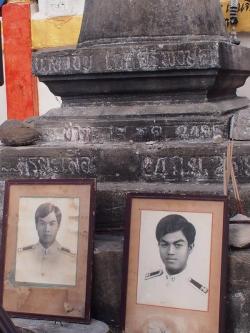 "Their stories are not known to people. Who were they? What were their backgrounds? Why did it happen in Nakhon Pathom?" said Patporn, who made the film with Teerawat Rujenatham. "I'm also interested in the hanging part: why were they killed that way? As torture? Humiliation?"

The Two Brothers had its first screening on Sept 24, the date of the murders, and is now available for viewing on the Documentation Of Oct 6 Facebook page.

Told largely through an interview with the two men's brothers, The Two Brothers plays out like an unearthed memory, a personal biography with national implications. It is a simple film intended as a lesson on history, but it's also heartbreaking hearing the brothers of the two men remember the shock they felt upon hearing the news -- from the radio -- and the subsequent confusion over what really happened to Choomporn and Vichai.

When Patporn first contacted Choompol, Choomporn's brother, he thanked her for calling and asking about the case. "Then he cried," Patporn said.

"He cried for several minutes, and I didn't know what to say. It didn't feel right to say, 'It's OK', or 'Be strong', because I didn't think I had the right to tell that to the person who had suffered for so long, who felt the weight of injustice and who had lived a bitter life for decades over the death of his brother. That's what many family members of the victims of Oct 6 still feel today."

As with other deaths from Oct 6, no one has been charged for the murders of Choomporn and Vichai.

The film shows that of the two men, Choomporn was the one who had a strong political commitment. Before the murders, he and Vichai borrowed their friend's motorcycle and went out to put up posters protesting the return of Gen Thanom, who had left the country three years earlier, after the student uprising of Oct 14, 1973. They were seen again as corpses hanging side by side from the gate, their necks snapped and their tongues sticking out -- in one of the iconic photographs people would come to associate with the horror of Oct 6.

The two filmmakers went to interview the Choomporn's and Vichai's brothers at their home province in Buri Ram. But one of their missions was also to locate the gate on which their bodies were hung, to locate the scene of the crime. Research, luck and detective work took them around Nakhon Pathom in order to find out if the gate – so prominent in the photograph -- still exists, and if people today remember what happened there 41 years ago. 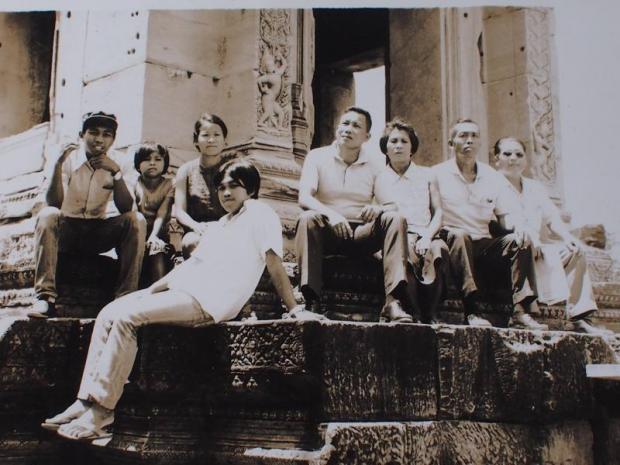 "We studied the photograph, we asked around and we got lucky," said Teerawat, a veteran cinematographer and the other director of The Two Brothers. Teerawat and Patporn followed the clues to the house of an old village chief, who was 17 in 1976, and he took them to "the red gate", as it is now called. It is a gate in the middle of an empty real-estate plot. "It's amazing that it's still there after 41 years, given that most people would find its grisly past a sign of bad luck," Patporn said. "But the current owner doesn't care. He didn't believe in superstition, and he said it would cost him money to change or remove it. In a way, he has preserved important historical evidence."

The Documentation Of Oct 6 project aims to do just that. Founded last year with a committee led by well-known scholars such as Thongchai Winichakul, Puangthong Pawakapan, the recently deceased Suthaichai Yimprasert and many more, the project attempts to preserve the memory of the incident. In the past 20 years, Oct 6 has been commemorated, usually by activists and scholars, and lately has gained the attention of a wider public. But instead of remembering Oct 6, 1976, only on Oct 6 of each year, the project wishes to create an enduring archive of stories and memories, in order to achieve understanding and ultimately justice on behalf of the victims and their families.

Like the ransacking of a morgue, the project searches for autopsy reports, court testimonials and eyewitness accounts, as it tries to give names and faces to those beaten, hanged from trees and otherwise killed that morning in 1976. The project's Facebook page and website are active and store a number of photographs and stories. The Two Brothers is the second film produced by the project, the first being Respectfully Yours, which records testimonials of victims' families.

"When we began filming The Two Brothers, I was told to tell the stories of Choomporn and Vichai as two human beings -- not of people with ideological or political beliefs," said Teerawat.

"Viewers should see them and get to know them as two people who died and whose deaths led to a national tragedy.

Once a taboo subject, the incident of Oct 6 has inspired several films in the past few years. Today at the Thai Film Archive, the programme called "Luem Sia Terd Ya Kid Tueng" (Forget It, Do Not Think About It) begins at 2pm and will screen four films related to Oct 6. The programme is as follows:

- They Will Never Forget (1977): This 34-minute film by Japanese filmmaker Ooka Ryooichi puts together 8mm footage from several sources, ranging from the student uprising of Oct 14, 1973, to the massacre on Oct 6, 1976.

- The Two Brothers (2017): A short documentary about two electricians whose murders became one of the catalysts for the Oct 6 incident (see main story).

- Pirab (Pigeon; 2017): Pirab is a student film by Pasit Promnampol. It dramatises the story of a group of students who've been arrested after the chaos of Oct 6. It is rare that a student film touches on such a heavy subject.

- Dao Khanong (By The Time It Gets Dark; 2016): Thailand's representative at the Oscars tells the story of a filmmaker who wants to make a movie about Oct 6, and how politics, memory and filmmaking come together into a puzzle that still hasn't been solved.

A panel discussion with Ing K, whose film Shakespeare Must Die was banned by the censors for showing a scene re-enacting the violence of Oct 6.