From screen time to the big time
Life
Arts & Entertainment

From screen time to the big time

The launch of the iPhone 6s and its 'Fighting Fish' wallpaper three years ago led to international recognition for Visarute Angkatavanich. Muse spoke to him about his twin passions — photography and fish

On Sept 9, 2015, Apple proudly announced their brand new iPhone 6s. Though the phone itself didn't stir up much excitement due to its recycled design, it was the wallpaper that got people talking.

Floating elegantly on the 6s' screens were large, flowing tails of vibrantly coloured fish. To many Thais, their stunning patterns and dynamic movements looked familiar, and within no time, people started to investigate.

Internet detectives quickly found out that the fish were, in fact, Siamese fighting fish (internationally known as betta fish), a common pet in many Thai homes. And they were, in fact, almost identical to Thai photographer Visarute Angkatavanich's photo projects -- "Aquacade" and "Symphony Of Betta".

Facebook and Twitter users quickly started to compare Visarute and Apple's images. Channel 3's morning news show even spent some time on the speculation. Yet, bounded by contractual agreements, Visarute wasn't willing to open up about his role with the tech giant. Nevertheless, his signature was undeniably there, and his fame catapulted overnight. 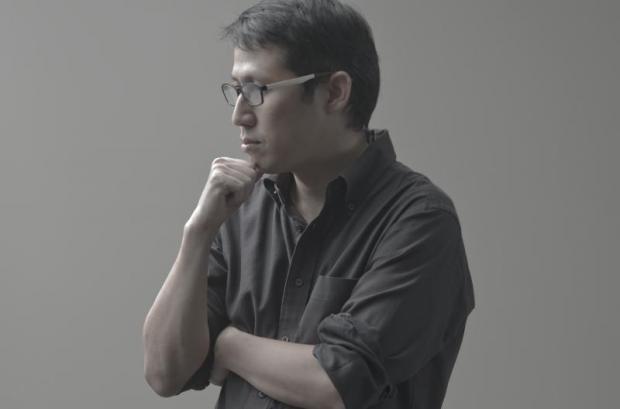 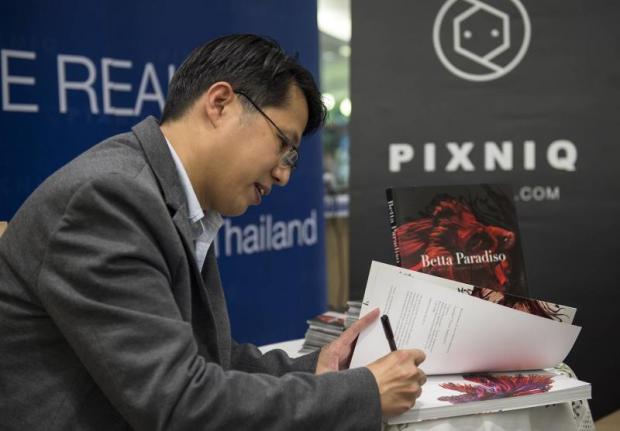 Three years on and numerous international exhibitions later, Visarute has finally put together his first ever photo book -- so fans won't have to view his stunning works from phone screens ever again. Betta Paradiso: The Art Of Siamese Fighting Fish features hundreds of the photographer's best works since he started his project in 2011.

"It moves from taking normal fish photos to abstract photos," he said as he flipped through the book. "The more photos I took, the more abstract the fish became. Afterwards, I didn't even view them as fish anymore. It's not about the fish, but it's about the shape and form. Some photos at first glance -- you wouldn't know that it's a fish. The colours, the movements, the rhythm would surprise people who normally raise Siamese fighting fish."

Visarute's love of photography and fish came at a very young age, naturally leading him towards his fame and success today.

Growing up around hobby photographers like his grandfather and father, Visarute started messing about with cameras when he was in first grade. He eventually started to get serious once he reached eighth grade, and upon graduating with an advertising degree at Chulalongkorn University, he ended up having to take product photos himself due to the high cost of commercial photographers. 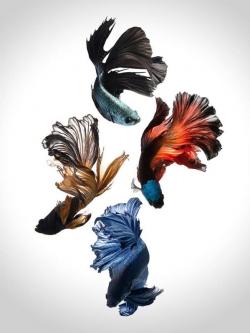 At the same time, Visarute has always been fascinated by fish. With his family home running a clinic, the only pet that he could raise were fish.

"Boys at the time liked raising Siamese fighting fish," he said. "So my father's generation knew how to raise them and breed them. I'm a person who likes fish. Even when I go to fresh markets, I like to go look at the fish. I like to eat fish too," he deadpanned. "Whenever I see fish, they draw me in. I probably saw them as something strange. They live in the water where other animals would die. They aren't bound by gravity. I feel like they're something alien. They're strange -- like a monster. They're different, and they've always attracted my attention."

It was seven years ago that Visarute had the career-changing idea of combining his two interests.

"In 2011, I registered with Shutterstock to sell photos," he said. "At first I just took photos of my surrounding environment. Then one day, I was walking around Chatuchak Market and I came across some black-and-white goldfish. I thought they were cute so I bought them. I started out taking photographs of the goldfish."

Later on, Visraute visited ornamental fish competitions, coming across Siamese fighting fish that he'd never seen before in his life. Through years of selective breeding, the colours and shapes of the fish were completely different from the ones he raised as a child.

"I saw the potential that they could be something," he said. "I looked at their dynamics, I looked at their movements. I wanted to highlight the shape and texture of the fish. The techniques I used to shoot the fish -- every studio photographer would know how to do it. It's not hard. I don't really edit or adjust the colours. I'm actually quite conservative in terms of photography. But I'm the first person who did it, and as I said, I didn't view them as fish, so the presentation is more interesting."

The most challenging part of this project isn't the three to four hours of waiting and luring (with mirrors and other fish) to get the perfect shot, but searching for the most imperfectly perfect subject.

"I don't look at what other people are looking for," he said. "The fish I'm shooting aren't perfect. If they're not perfect, there are gaps which I can fill. If I have a pageant fish that's perfect in every way, I probably wouldn't be able to think of anything new. The features that fish pageants don't want like curly and ripped tails -- I'm interested in that. I see that there's texture -- and I've taken so many pictures of them to the point that they're now quite popular."

According to Visarute, after Apple released the iPhone 6s, Thailand's sales of Siamese fighting fish increased by a whopping 200%. Although it's good for the economy, what we're quickly losing is its Thai origin, as other countries have quickly claimed the fish as their own.

Working with the Ministry of Agriculture and Fisheries, Visarute has been attempting to push the Siamese fighting fish to become another icon of the country -- much like Thai elephants, as globalisation and trade have erased all signs of its origin.

"Now, people only call them betta fish," Visarute said. "Nobody knows it's called the Siamese fighting fish. Nobody can trace down that it's something Thai. Yes -- it's a fish that comes from Asia, but for hundreds of years the process of breeding was through the hands of Thai people. It's like we have an asset, but people don't know how to use it. It's like leaving gold in the dirt; somebody else will dig it up and use it. Japanese designers have made yukatas out of their patterns. British designers have made scarves. It's only Thailand who thinks that it's still ours -- but what we only do is sell the fish."

Nevertheless, thanks to Visarute's stunning photographs, the Siamese fighting fish name did resonate around the world for a short period of time.

"My fish project came from my character since I was young," he said when asked if he would do something new. "I like taking photos, I like looking at fish, I like looking at photography and Greek and Roman classicism. All these things shaped out to be this project. If you ask me if I can do something new, I can't answer that. I know that it's something I should do, but it doesn't mean that everyone can do it. Doing something new that becomes something outstanding may be a once in a lifetime occurrence." 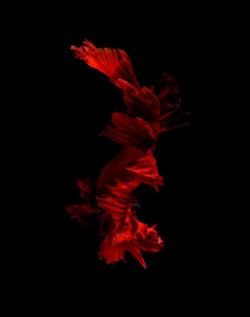 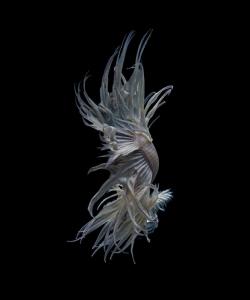 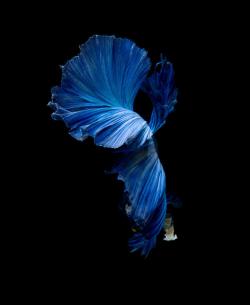 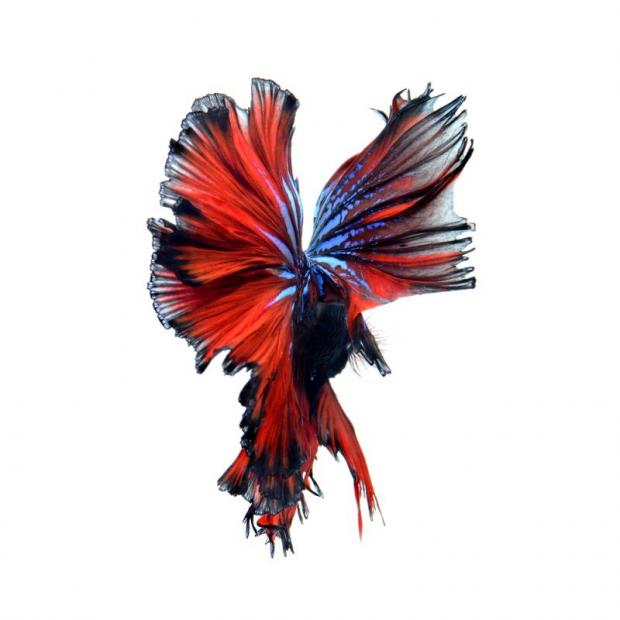 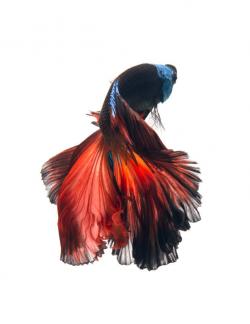 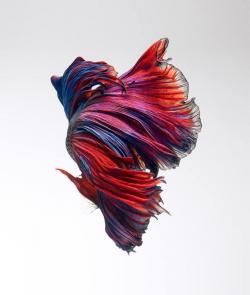