Thailand has a well-earned reputation as a haven for LGBTI, but anxiety remains high in the community over a new draft law that they say does not go far enough

published : 15 May 2018 at 08:08
newspaper section: Life
writer: Melalin Mahavongtrakul
A showcase of children’s artworks from Out of the Box project.

The theme of this year's International Day Against Homophobia, Transphobia and Biphobia (Idahot), which falls on Thursday (May 17) is "Alliances For Solidarity". On the day, events will be held worldwide to celebrate gender diversity, and to raise awareness for LGBTI (lesbian, gay, bisexual, transgender and intersex) rights violation.

In Thailand, Museum Siam will be officially unveiling its latest exhibition, titled "Gender Illumination", to highlight gender diversity and related issues -- from history, lifestyle, gender roles, struggles and acceptance, as well as the much discussed genderless restroom and marriage equality -- as found within the context of Thai society.

On the day, panel discussions, workshops and performances by members of the LGBTI communities and partner organisations will also be held alongside the exhibition's launch at the museum in the afternoon.

‘Gender Illumination’ will officially open this Thursday at Museum Siam.

A ROOM FOR RAINBOW

Gender Illumination began with a thought of diversity in humans, said Chonchanok Phonsing, senior knowledge management officer at Museum Siam. LGBTI people exist in every corner of society, as strangers, friends, families and loved ones. But little is known about them outside of stereotypical images. One of the aims of this exhibition is then to illuminate -- as the name of the exhibition suggested -- that there is diversity in different shades and scales when it comes to gender.

"Everyone is human all the same. And we hope for people to see the human inside each person, without gender to dictate our perception of them," said Chonchanok.

First, it starts with recognising that there is not only two genders in the world. At the entrance, visitors are given a gender ticket that comes with an empty outline of a human body that they can draw on. Questions are asked of their gender identity (who they are), expression (how they dress) and sexual orientation (who they like) and ends with a message that these aspects do not need to conform with one another at all. 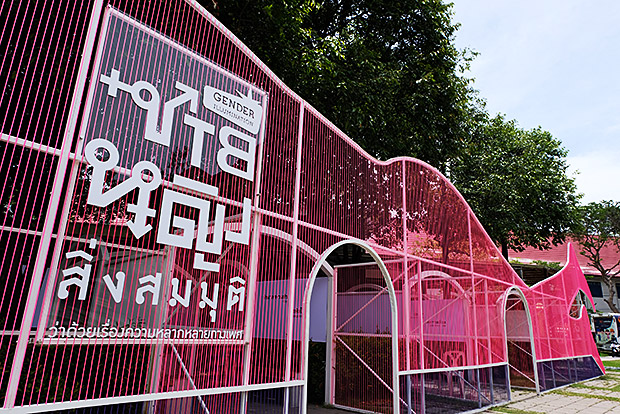 Then, visitors are introduced to the much debated subject of genderless restrooms where participants sit on a toilet while listening to messages about letting go from Phra Shine Waradhammo, a neo-Buddhist figure revered within the LGBTI community.

The concept here, said Chonchanok, is that despite the freedom for LGBTI to express themselves publicly, this is where segregation meets levels of acceptance.

"Regardless of how people identify themselves elsewhere, when it comes to the toilet, when it comes to choosing, people still end up having to choose two things that society set out and have to let a part of themselves go. So, we also want people to think if they, too, can let go of a concept of gender," explained Chonchanok.

Other highlights of the exhibition include showcases of vintage LGBTI magazines and artworks from children from Out of the Box project by Togetherness for Equality and Action (TEA) group, which reflect perception of gender from the children's point of view.

Downstairs, the space is divided into colours as they house displays of items that carry value and significance that surround people's gender expression, acceptance, and even rejection within both public and private spaces.

To really tell a human story of the LGBTI population, the museum sought their involvement and contribution of items for them to be able to share their own story. Some of the items being exhibited include a denied marriage request by a same-sex couple, earrings, Barbie dolls, a beauty pageant sash and trophy, a piece of music, all the way to a chest binder, a vaginal dilator and hormone pills for transgender people. 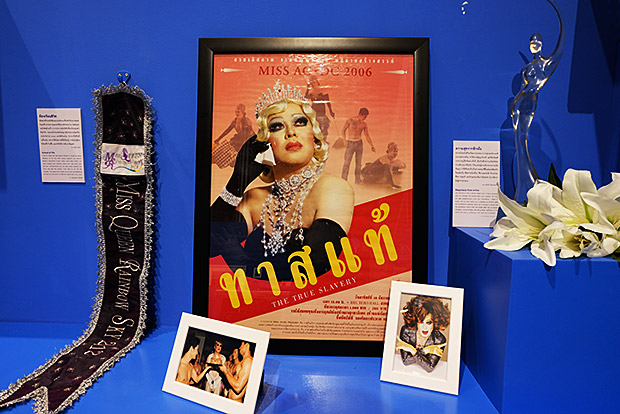 Some of the items on display. 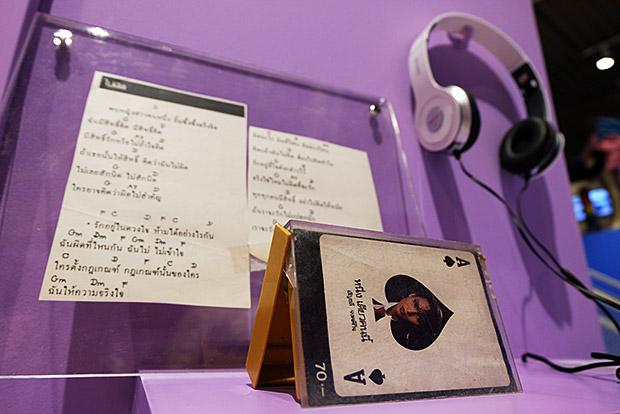 At the end of the exhibition, visitors are asked to vote on whether they agree with genderless restrooms, same-sex marriage, an ability to change gender-specific titles, to whether they'd be able to accept if they have LGBTI parents or children, and if they'd support LGBTI politicians. It appears most people who have voted are in favour of marriage equality, though remain apprehensive about genderless restrooms.

Since the soft launch at the beginning of this month, the exhibition has attracted about 100 visitors on weekdays, and around 400 on weekends. Reportedly, people of all ages and genders have visited the exhibitions.

"From observation, we've seen families coming in, all the while exchanging their thoughts with one another. Suffice it to say that gender is not a topic many would discuss at home, or even during a car ride or at the mall. So, this is one space they can safely and openly talk about it," said Chonchanok.

"We do want people to understand that we all live in a diverse society, and people can accept and respect one another as fellow human beings. Diversity happens, and there's no right and wrong to it."

While the curating team truly hopes people understand more of the gender spectrum that exists within society, Chonchanok also said that they're not trying to play a role of activists that would instigate a movement or change in social structure.

"Our roles play out differently, I suppose. We only wish to give this knowledge, this piece of information, to people for them to understand more of the topic," she said. 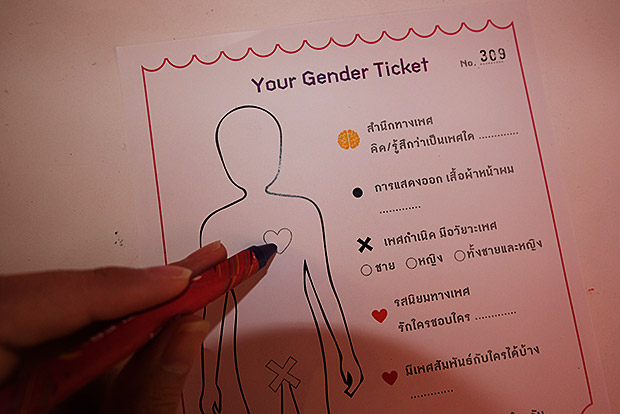 A ‘gender ticket’ asks visitors about their sexual orientation, gender identity and expression.

"While we were working on this exhibition, we began asking ourselves whether Thailand really is a paradise or paradox for LGBTI people," said Chonchanok. "Compare to other countries, we're considered as very open. But we are also curious if what we're seeing is really equality."

To the world, Thailand carries an image of a tolerant nation with our gay-friendly tourism campaigns, world-famous transgender beauty pageants, LGBTI visibility in the media and entertainment, and more. A beautiful surface, though it's somewhat hollow. The so-called gay paradise carries no legal acceptance when it comes to marriage and gender identity.

Recently, the subject of marriage equality in Thailand was back under the spotlight, sparking foreign media attention. In the wake of this ongoing issue, Life talked to Kittinun Daramadhaj, president of the Rainbow Sky Association of Thailand, on the progress of the civil partnership bill that is currently being drafted by a committee organised by the Rights and Liberties Protection Department at the Ministry of Justice to comply with the national human rights plan.

The committee is made up of 32 members, with seven representatives from LGBTI organisations. Kittinun is also on the committee.

The bill is modelled after a similar French law that allows couples -- same-sex and otherwise -- tax and pension rights. A draft has been unofficially released online, with strong emphasis on financial aspects of the relationship. It does not mention anything about adoption or the rights to establish one's family.

While Kittinun did say the draft is a work in progress and is subjected to change, he suggested the content will mostly remain as is, adding that he is 50% confident that this bill would pass and that the state has promised for the bill to be ready by the end of this year.

Although the bill's current content probably doesn't spell out full-fledged equality, for Kittinun, almost anything goes at this stage.

"At least, it would expand on the rights we have today, though not all of it just yet."

Kittinun said it's a soft approach taken to prevent the bill from being vetoed in later stages of the legal process. The issue of children is left out of the bill as he feels many conservative minds still carry stereotypes against LGBTI people having children.

"Of course we want equality, but we also have to look at the possibility," he said. When the acceptance of human rights is not fully 100%, he feels it's also difficult for the law to reach that point of complete acceptance and equality.

SEE THE OTHER SIDE

While the bill's current draft is gaining support, it also draws criticism as it doesn't really completely address the needs of the LGBTI community.

"To put it bluntly, this current draft looks more like a contract for a financial transaction. It has nothing to do with rights, or establishing a family, or for equality and protection of LGBTI people whatsoever," said gender activist Chumaporn Taengkliang.

Chumaporn is in favour of another approach, which is to fix the Civil and Commercial Code, Section 1448, which states that "a marriage can take place only when the man and woman have completed their 17th year of age". Man and woman could be changed to simply "a person" for people of all genders to be able to marry one another.

"I feel fixing Section 1448 would be easier than making up entirely new laws, but some say it's more difficult," the activist said.

She did admit that this approach may be harder to push as it involves changing a long-held belief of the people. Impact and opposition from the conservatives will be strong, indeed, but not impossible to happen.

Chumaporn also pointed out that the age people are allowed to become civil partners, according to the bill draft, is 20 years old. She considers that a double standard when heterosexual couples can get married as soon as they reach 17. It is also unclear where couples can register their partnership. And if they cannot register at every district office as heterosexual, cisgender couples, then would that constitute discrimination?

She further criticised the bill for failing to address the issue of adoption, or legitimising a partner's right to become a guardian to children from previous relationships, and that it doesn't support surrogacy as the process is now legal for married couples only.

Chumaporn said there are now plans in motion to host a panel discussion on Section 1448 in the near future.

Addressing recent foreign media hype on Thailand's situation, she suggested that people may be overexcited. Attaining equality is not just about putting a tick mark that a certain country finally has something, but it also lies in fine details of what the "acceptance" really entails.

"Gender Illumination" opens officially on May 17 and will continue until Sept 30 at Museum Siam. Opening hours are Tuesday to Sunday, 10am-6pm. Admission is free. Visit museumsiam.org.