Thai, Myanmar and Indonesian artists in a group show at Nova Contemporary

Who said rituals had to be dull?

Three emerging Southeast Asian artists explore themes of community, the social as well as personal landscapes through vivid sets of works on paper, canvas and fabric in an exhibition at Nova Contemporary.

Brought together by Loredana Pazzini-Paracciani, an independent curator and researcher, Thai artist Parinot Kunakornwong, Indonesian painter Iabadiou Piko and Moe Satt, Myanmar's leading contemporary artist, present multifarious works loosely tied together by the curator's reading of "rituals" as the repetition of gestures in their distinct artistic practices as well as in society.

Yangon-based performance artist Moe Satt is undoubtedly a rising star in the Asian landscape. A finalist for the 2015 Hugo Boss Asia Art Award for emerging Asian artists, Moe Satt uses his body as well as participatory installation works as vectors to convey his political sensitivities and secular views in a country dominated by Buddhist-derived nationalist ideology.

The Parasol Alternative Project, an installation of three 2.5m-span green, yellow and red umbrellas -- the colours corresponding to those of Myanmar's national flag -- is both imposing in size and fragile in nature. By adding zips to the umbrellas' shades, Moe Satt invites visitors to either tear or mend the silken fabrics, in rupture or reconciliatory gestures. 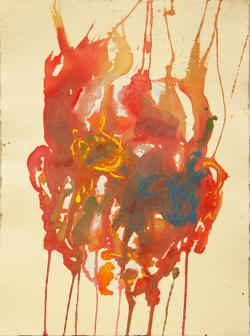 A piece by Parinot Kunakornwong. Photos courtesy of NOVA CONTEMPORARY

When unzipped, the umbrella shades fan out in flowerlike shapes -- an illusory beauty beneath which the symbolism of a broken nation, broken communities and broken homes appear in the lining. But even when repaired, the umbrellas appear menacing -- an all-encompassing fabric destined to be placed on top of our heads, protective but also unifying to the point of control or coercion -- while retaining their fragile quality.

Previously shown in Shanghai for the Hugo Boss Asia Award, the installation is accompanied by a video performance of the artist in a popular park in Yangon. Moe Satt unzips and zips the fabric under the watch of curious bystanders -- whom he invites to repeat the same gestures, creating a collective experience.

Using ephemeral techniques such as performance and participatory actions, the artist created for the opening at Nova Contemporary a set of colourful alcohol shots -- reprising again the Myanmar national flag's red, green and yellow hues -- for visitors to drink. Often associated to the act of sharing, the cocktail shots furthered his reflection on collective experiences and their need to build stronger communities.

A self-taught painter, Iabadiou Piko's symbolism-filled paintings are a recording of the artist's daily encounters and experiences. Trained initially as a photographer, Piko views the brush as a freeing object, which allows him to transfer his thoughts and emotions more directly. The doodle-like shapes and inscriptions on Piko's canvases are reminiscent of Basquiat, who features among the artists Piko cites as his inspiration.

While Piko's recording of external events and internal thoughts and emotions could dialogue well with Thai artist Parinot Kunakornwong's "Heads In The Heads" painting series, they are shown in entirely different location.

Parinot's work, situated on the gallery's second floor, appears almost disconnected from the rest of the exhibition, in what could be mistakenly viewed as a solo show. Leaving paint materials to react together on paper, the Thai artist, guided by half-conscious images, recreates spectral portraits that were imprinted in his mind.

"Parinot's inner energy guides him through the process until the heads or faces appear distinctively on the surface," writes Pazzini-Paracciani.

"Rituals: Ink, Oil, Cotton And Thread" is on show at Nova Contemporary until July 15. 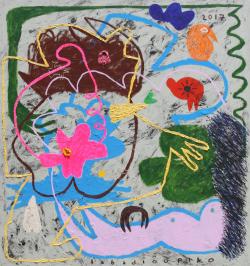