A farewell to a memorable palace
Life
Social & Lifestyle

A farewell to a memorable palace

To bid farewell to Bang Khun Phrom Palace before its closure, hundreds of Thais queued and waited eagerly for one last visit to the handsome palace every Saturday morning throughout last month. The palace was once home to Marshal-Admiral Prince Paribatra Sukhumbhand of Nagor Svarga (1881-1944), and later served as a public museum under the supervision of the Bank of Thailand.

But since the museum has been relocated to the nearby former banknote-printing facility in the compound of the Bank of Thailand, Bang Khun Phrom Palace will be closed for restoration, which is expected to take years. Its final opening last month was extraordinary since visitors were allowed to visit Tamnak Somdej, a royal mansion that had never been open to the public.

Sitting on a 30 rai land plot in Bangkok's Thewet area on the east bank of the Chao Phraya River, Bang Khun Phrom Palace is rich in history, art and architecture. Most renowned is its stunning rococo, baroque and German art nouveau architecture as well as stucco art. Completed in 1906 on King Chulalongkorn's command, the palace consists of Tamnak Yai, the mansion for the king's 33rd son Prince Paribatra Sukhumbhand, and Tamnak Somdej, the mansion for the prince's mother, Queen Sukhumala Marasri.

Tamnak Yai is a neo-German baroque mansion with sublime stucco art while Tamnak Somdej is in the German Art Nouveau style, with a lot of light and ventilation spaces. The roofs of both mansions are made of diamond-shaped tiles, known by Thais as krabuang wao. The palace's main gate on Samsen Road is acclaimed as Thailand's most beautiful stucco entrance. 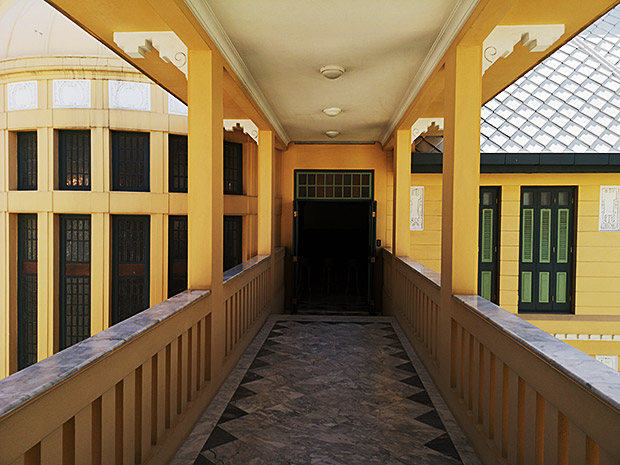 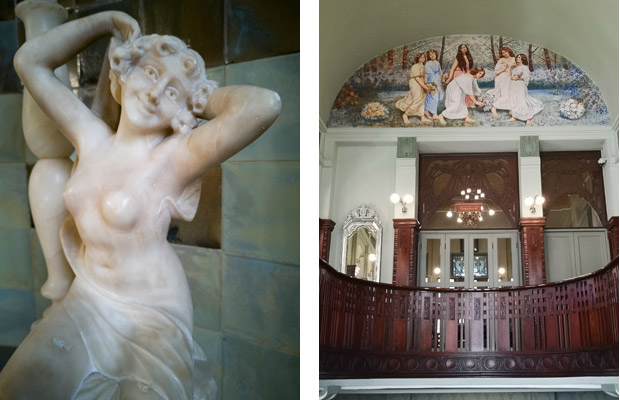 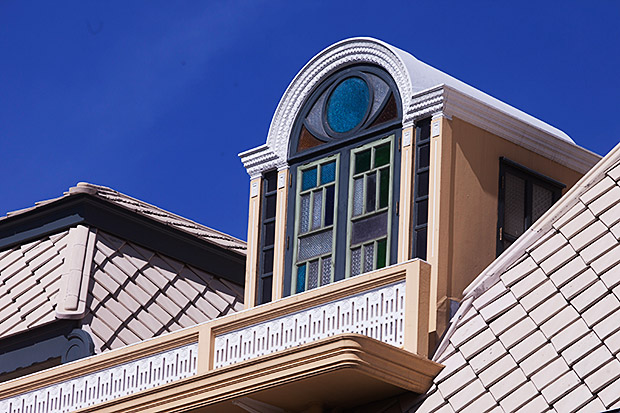 The highlight of the recent visit to the palace was, of course, Tamnak Somdej, which had been off limits to outsiders, since it still functioned as a workplace for central bank employees until recently.

Designed by German engineer Karl Dohring, who served Siam's State Railway Department, Tamnak Somdej was built seven years after Tamnak Yai on the prince's command for his mother. It has a high ceiling in the main hall, long spiral staircases connecting parts of the building, mosaic decorations and finely carved wood. The geometric and floral motifs on the pillars, stairways, doors and ceilings are either those carved onto the walls or bas-reliefs. The decoration looks delicate and feminine, suitable for the mansion's owner Queen Sukhumala Marasri.

A must-see there is a fresco on the upper wall of the second floor depicting a group of pretty young Western girls. It was created by Italian artist Carlo Rigoli, whose paintings can also be found in the famous Ananta Samakhom Throne Hall. While strolling the staircase, visitors will be able to see the eastern wall, which is wholly adorned with edged glass from the floor to the ceiling.

Tamnak Somdej is connected to the northern wing of Tamnak Yai on both floors. Tamnak Yai is outstanding for sporting ionic pillars as well as stunning stucco art on its reliefs, walls and the square, oval and round-shaped windows. The curvy lines of the roof and exterior eastern walls and certain stucco motifs reflect the influence of baroque and rococo art. These art pieces are praised as one of the country's most beautiful stucco art. 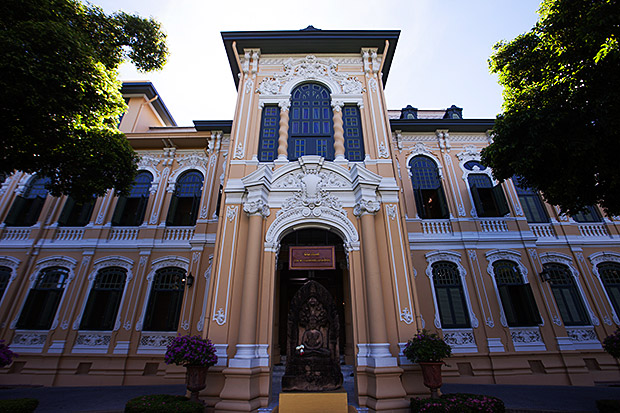 The main marble staircase is acclaimed as one of Bangkok's finest stairways. Stucco design on the tops of the columns and other parts above the columns is baroque art. The decoration of the ceiling above the main staircase mixes S- and C-curved and shell motifs that were popular during the baroque and rococo periods. Huge bronze chandeliers are eye-catching. The hallway beside and in front of the staircase boasts a few marble water dispensers. The ground floor of Tamnak Yai had two reception rooms, two dining rooms, restrooms and a pantry for the prince and family.

On the second floor, the Pink Room is the finest and most important room and comparable to the palace's throne hall. Stucco decoration around the oval-shaped light spaces above the doors and on the walls, curvy lines, the tops of the columns, gilded stucco and motifs on the carved wooden door panels resemble baroque architecture. Motifs on the ceiling are neoclassical art. Decorated with the portraits of Prince Paribatra Sukhumbhand, his royal parents, sister, aunt and consort, the room is mostly in the pink and green tones according to the colours of the birthdays of the prince's father and the prince respectively.

The Pink Room is a place of precious memories since Prince Paribatra received kings and foreign dignitaries and performed religious ceremonies in the Pink Room. King Rama VI announced his engagement to a princess here. For years until today, the room is still the most important room, reserved for welcoming monarchs, country leaders and VIPs only. Among the royal visitors here was Queen Elizabeth II of Britain.

Next to the Pink Room is the Blue Room, now in the green shade. The prince's consort Princess (Mom Chao) Prasongsom Paribatra welcomed her guests here. Currently, this chamber is full of old photos of royal visitors, including King Rama VIII and King Rama IX.

Opposite the Pink and Blue rooms are the Paribatra Room, an exhibition room on the life and work of the prince from the late years of King Rama V to the reign of King Rama VII. It houses a wax statue of the prince in his marshal-admiral's uniform. There are also the prince's personal belongings, including his apparel, hats, pipes, letters, books and old photos, models of a warplane and a warship built on the prince's command. Also on view are the rare Chakri porcelain tea sets and a set of Chinese blue and white ceramics with King Rama V's abbreviated name Jor Por Ror. The Paribatra Room was formerly called the "Ma Son" or "Kim Tueng" Room since the palace owner kept his collections of Chinese blue and white porcelains and the Chinese-style paintings of horses -- his favourite animal. 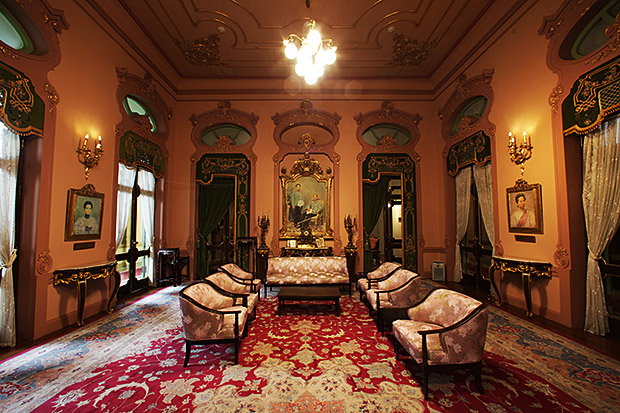 Prince Paribatra Sukhumbhand was the chief-of-staff of the Royal Thai Army, commander-in-chief of the Royal Thai Navy, Naval Minister, Army Minister, Defence Minister, Interior Minister, Privy Councillor, Supreme Councillor and Regent of Siam. He was outstanding in various aspects, especially military, administration, art and music. He composed 73 traditional Thai and modern songs, including Khaek Mon Bangkhunphrom, March Paribatra and Maharuek, and wrote the country's first book on orchids. The prince once said: "If I had had choices, I would have chosen to study music and languages. But, I had not, as I must serve the country."

Throughout the 30 years of the prince's stay here, the palace was called Bang Khun Phrom University due to the gatherings of artists and masters in various fields, especially music, a kind of ornamental trees called mai dud in Thai, Chinese porcelain and orchid plants that the prince loved.

On June 24, 1932, a group of revolutionaries stormed the palace to hold the prince hostage. The event brought about the end of absolute monarchy. The prince went into exile in Bandung, Indonesia, where he enjoyed gardening and music until his death in 1944. The palace was turned into government offices after the revolution and became the headquarters of the central bank in 1945 and the home of the Bank of Thailand Museum in 1992, with exhibitions on the prince's life, the history of the central bank and Thai and foreign currencies.

Although Bang Khun Phrom Palace no longer serves as the Bank of Thailand Museum, it is worth appreciation and conservation. Still and always, the central bank regards the palace as national heritage.

Visitors are welcome to look at the exhibition of the 75-year-old central bank at the new Bank of Thailand Learning Centre near Bang Khun Phrom Palace. The learning centre is open every day from 9.30am. The Library and Co-working Space areas close at 8pm, while the museum closes at 4pm. Visit http://bot.or.th for more information.