Shining a light at the Bangkok Biennial
Life
Arts & Entertainment

Shining a light at the Bangkok Biennial

'Coming Soon" sounds like the stuff of theatrical trailers. "Coming soon to a city near you" evokes the reproduction and decentralisation of a system, an ever-multiplying model and the balancing act between a one-size-fits-all mould and local specificities. 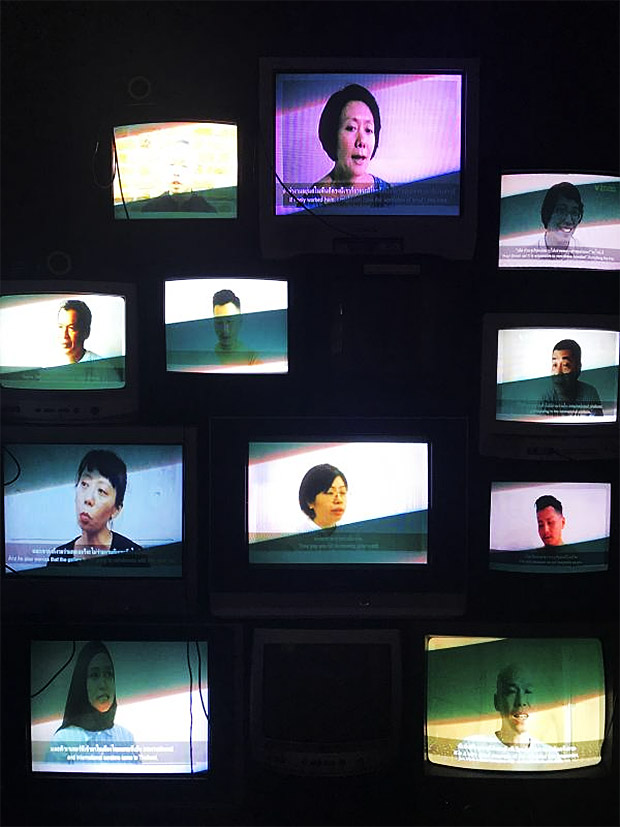 "Coming Soon" is the title of a research-based art project, curated by Lara van Meeteren and Bart Wissink, which is part of the Bangkok Biennial, the three-month-long art show at multiple venues. In today's context, art fairs, biennials, triennials exist for multiple reasons and purposes that can range from branding a nation to attracting tourists, but also act as a focal point for international visitors -- actors of the so-called "international art world system" -- who converge toward specific locations on the globe. "Coming Soon" aims to provide a platform for discussion regarding the exchanges and transactions that take place at biennial-type events.

The nature of the exchanges between international and local actors, and the conditions under which they take place, is at the core of 11 artists' speeches, recorded in Thailand and in Hong Kong, in which each art practitioner shares his or her experiences and expectations.

The show is located in the back room of a private home -- Apartment 5A, The Parichat Apartment, 323 Nakhon Ratchasima Road, Bangkok -- the pavilion providing a space in which visitors can engage with the speeches, as well as contribute to the debate through discussions, which will then be disseminated through an online platform.

The confined space of the room, filled with video recordings of the participating artists and voices speaking in Thai, English and Cantonese -- a sound work by French artist Cedric Maridet based on the interviews -- contrasts sharply with the globalised art world and the borderless online channels. A private box, the exhibition room is reminiscent of the analogue televisions used in the installation, which visitors must tune in with, cutting themselves off from the outside world, yet accessing different discourses and locations.

Shot in locations significant to the artists -- public spaces, commercial galleries, artist studios, institutional art spaces -- the videos highlight the artists' relationships to an increasingly frenetic art ecosystem as well as their role and responsibilities towards the audience and society. At times, these two poles can be conflicting, as one sometimes seeks to corrupt the other. 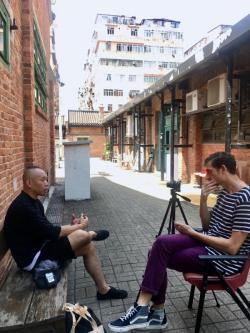 In personal stories, Piyarat and I-na delve into the new perspectives they have gained from connections and encounters with the international art world, while Mit evokes the ways in which he wandered in and out of Thailand and his artistic practice. Speaking about separate events -- one that took place in the 1990s, the other in May 2018 -- Warren Leung Chi Wo and Chulayarnnon conjure up the idea that, although the art world is connected and globalised, there remains a centre and a periphery. Recalling with humour his experience on the Cannes Film Festival red carpet earlier this year -- on the occasion of the special screening of Ten Years Thailand -- Chulayarnnon expresses his anonymity as a Thai in the festival.

This idea is somewhat debunked by the regional aspect of "Coming Soon", focusing on two Asian locations. Still, on the one hand, Hong Kong has become a major commercial art hub, while on the other, Bangkok appears as an emerging "art destination".

"We're trying to stay away from literal comparisons between Hong Kong and Thailand," Wissink explains. "We're not saying, 'People in Hong Kong know what it's like and they're going to tell Thailand about it'."

As members of the "international art world" themselves, Wissink and van Meeteren sought to create a project that "asks more questions than it ... answers". The curators of "Coming Soon" even take a step back by letting the artists control their own narrative and language -- be it Thai or Cantonese -- rather than enforcing the use of English, predominant on many art scenes.

As Thailand holds its first biennial and biennales this year, the question of who benefits from these international exchanges is crucial, especially as, culturally, a foreign stamp of approval holds great value in the country.

"In a lot of the interviews we did with artists, there's the word listening: do they [international art world actors] come to listen to us or do they come to tell?" Wissink adds.

The international art-world system, with its mechanism and dynamics, is coming here soon, the curators tell.

"It's going to happen, people are building this kind of storm and we wanted to comment on that. It's also inevitable, but be sure you're ready because you're going to be on it anyway," says van Meeteren.

I choose you! Pokemon turns 25