My first experience of popular theatre in Thailand was a likay performance in the main market in Chumpon. I had not been in Thailand for long and was on my way back from a trip to Malaysia, travelling by local bus and train.

I stopped to stay the night in Chumpon and as I walked around I found myself in the middle of a likay performance, in which I was noted and mentioned by the performers (there were no other foreigners around at the time), who made fun of me but in that jolly way Thai singers and comedians do when they crack jokes and improvise on stage. All good fun. 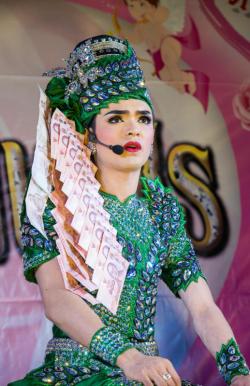 I was fascinated by the vibrantly coloured stage and sparkling costumes, by the strange sounding Thai classical music (to my Western ears at that time), by the stylised dramatic gestures and dramatic action, which reminded me of "music hall" and "mummers' plays" from back home in the UK. And was that an Indian cry that kicked off the whole event.

At that time, in the 1980s, I discovered that likay was said to be dying. Bangkok Post cultural commentator Suthon Sukphisit noted that in 1989 an evening performance would cost around 300 baht to stage; today that fee could be as high as 200,000 baht, and because an entrance charge is not levied, sponsors have to be found. And yet, despite the warnings of its demise, likay continues to draw in local crowds -- often like luk thung shows -- which are predominantly made up of grannies, mums and daughters.

Likay has been popular with working class audiences for more than a century and may have its roots way back to the 12th and 13th centuries (likay's origins are disputed). Professor Sukanya Sompaiboon of Chulalongkorn University described the process in her doctoral thesis on likay, arguing that there were two main sources for likay: "Shiite Muslim trade emissaries from Persia and migrants from the Malay peninsular". These two groups arrived at the beginning of the Ayuthaya period and they probably introduced dikir, a form of Muslim religious chanting, at that time.

Professor Sompaiboon also notes that another researcher suggested that likay came from Muslim chanting by Sufi clergy in Persia and India in the 12th century, the main form of which was called zikr. You can see dikir music in Malaysia, which is often called likay hulu in the deep South of Thailand, and the music is based around a group of chanters, accompanied by a ramana, a single-face frame drum; somehow this was combined with the Buddhist recitation, suat phramalai, which is used at funerals. She further notes that the "parent" of this new combination was actually a blend of Muslim chanting and the Thai sipsongphasa (12 languages) chant.

To further secularise the developing genre, references to Muslim celebrants were substituted by Hindu and Indian characters, so that the opening call of a likay performance, "ok khaek" is performed by a pseudo-Indian/Hindu (as Muslim rituals cannot be performed in a comical manner). Out of the sipsongphasa/dikir mix came two subgenres -- likay and the Central Thai folk music, lamtad.

For the dramatic elements of likay, stage craft was taken from dramatic dance forms like lakon nai and lakon ram; later Western dramatic elements such as winged stages were added. Likay developed throughout the 20th century, with great changes occurring to the genre in the second part of the century; the height of popularity were the late 1960s and 1970s. All the great luk thung, pleng lae and Central folk music masters can perform likay -- people like Chaichanna Boonachote, Waipot Petchsupan and Chai Muang Singh. Conversely, from the 1990s, likay regained some popularity through newcomers like Chaiya Mitchai, who parlayed his likay background into a career as a luk thung singer.

Earlier this year, I had the great fortune to be invited to a local likay performance in Chinatown, Chalermkrung 1, which has been hosting these events for probably a hundred years as a community. The Sornram Nampetch Troupe is one of the top likay outfits at the moment, and they set up a small, cramped stage at the intersection of four small sois, near the local shrine. I was immediately welcomed by seniors and taken under their wing. They told me that this was a merit-making event and was paid for by local community organisations. I was given refreshments and a slice of sugared toast and then told of the running order.

Back stage, sprawled across a dark lane, performers were putting on their make-up and changing into their sparkling costumes (which can cost up to 100,000 baht for the show's star performer). It's worth noting that likay and its stage costumes were hugely influential on the development of northeast dance dramas like molam mu). Younger performers were kitted out by mum or a chaperon (the two young male performers were superb singers with one seven-year old having a voice that must have been heard all around the district, such was his powerful voice). 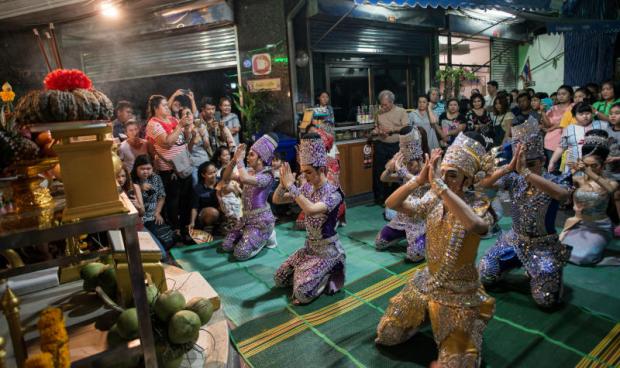 Once everyone was in their costume, the troupe's Thai classical ensemble played piphat music before the performers moved to the local shrine to perform a worship dance or ram tawimue. This beautiful ceremony alerts the audience to the start of the evening's performance -- the opening ok khaek is sounded and a synopsis of the narrative to be told (likay stories are well known to audiences and come from multiple sources, but usually involve love, fighting, skulduggery, melodramatic and comedic skits).

Then, an interlude for some Thai country songs. Then the storytelling began.

As the good guys fought the bad guys, sometimes they broke off to sing a luk thung song, sometimes to engage in a sword fight. Ensemble scenes with the star performer (phra ek) and comedians were my favourite skits. The action flows quickly and laughter follows.

Likay is a venerable working class art form, one that has survived because of its flexibility (molam is similar in this respect) and ability to move with the times. News of its demise, to paraphrase Mark Twain, are certainly premature.